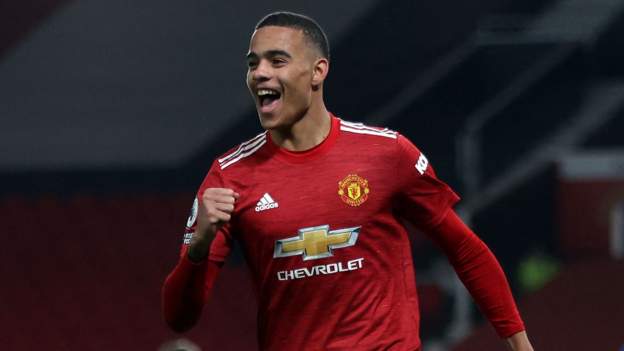 Manchester United came from behind to beat Brighton for the second time this season as Ole Gunnar Solskjaer’s side took a significant step towards confirming a place in next year’s Champions League.

Brighton looked set for the first Old Trafford victory in their history when former United striker Danny Welbeck reacted quickest after his initial header had been saved, nodding the visitors in front from close range.

However, not for the first time this season, United improved from a lethargic opening period to sweep to victory in the second.

Marcus Rashford levelled when he opened up his body and rolled an excellent shot into the corner from Bruno Fernandes’ lay-off.

Then, with eight minutes remaining, teenager Mason Greenwood headed home his first Premier League goal at Old Trafford this season after Paul Pogba’s volley had bounced into the ground.

The result gives United an 11-point cushion in the battle for a top-four place, although West Ham and Everton could reduce that to eight if they both win their matches in hand.

Henderson gets the nod over De Gea

Eventually, this game may be viewed as being more significant for what happened before it, rather than what occurred in it.

In the build-up, Solskjaer said both his goalkeepers would play matches before the end of the season.

However, the choice of Dean Henderson over David de Gea seemed significant.

Henderson played in six consecutive games immediately prior to the international break after De Gea returned to Spain for the birth of his first child.

Tonight though, there was no reason why De Gea should be sidelined other than manager Solskjaer’s preference.

It has been obvious for some time the present situation was untenable heading into next season and now United could have the tricky problem of trying to sell their highest earner when every club’s finances are being stretched.

That said, Henderson has to justify his place.

No blame could be attached to the England man for Welbeck’s goal as he did remarkably well to keep the first effort out.

Spilling a routine cross not long afterwards that required the intervention of Harry Maguire to clear the danger was a worry though.

Henderson was a bystander when Lewis Dunk clipped the bar as Brighton tried to increase their lead but the calm way he dealt with the reduced work he was provided with after the interval offers no obvious reason why Solskjaer should regret his decision.

It is nearly seven years since Welbeck left Old Trafford for Arsenal in a £16m transfer.

A succession of injuries prevented the 30-year-old from fulfilling the promise he showed in his formative years at United but he has been a regular nuisance to his old club.

Today’s effort was his fourth goal against them, all but one of which have come on this ground.

His reaction to score – the first time Brighton had been in front at Old Trafford since 1983 – was impressive and Welbeck was convinced he should have had a penalty in the second half when he was nudged by Maguire as he tried to put Brighton in front again as the ball rolled agonisingly across goal.

Clearly, time moves on. Now it is Greenwood trying to carve out a future for Manchester United and England.

With Anthony Martial possibly out for the rest of the season, Rashford carrying shoulder and knee injuries and Edinson Cavani struggling for form, Greenwood may have to carry United’s attack over the final weeks of the season.

He fired a first-time shot against the post early in this contest and while his six goals this season is a long way adrift of last years’ tally of 17, the confidence he will gain from this contribution will be welcomed by Solskjaer.

‘De Gea will definitely play for us again’ – what they said

Manchester United boss Ole Gunnar Solksjaer told BBC Sport: “It’s always difficult to play Brighton. We have had good results and we’ve had to earn them the hard way – we managed to find a way in the second half.

“Mason [Greenwood] was mature. Today he was one of our brightest players. He was clean, he was tidy and he got the goal. It’s a header inside the six-yard box and that’s what we need more from Mason.

On picking Henderson over De Gea: “I’ve got two great keepers, two numbers ones. David de Gea spent a while back home and then he had internationals so he hadn’t played for about a month. He’ll definitely play football for us again.”

Brighton boss Graham Potter told BBC Sport: “We contributed well in the game. We took the lead and were probably the team which carried the most threat in the first half – we just missed that final pass.

“Manchester United responded in the second half without creating too many chances. They scored from not too much.

“When it was live I thought it was a penalty [on Welbeck] then I suppose it’s the clear and obvious debate.

If Mike Dean had given it I don’t think VAR would have overruled it. There’s nothing we can do in the end. We’re disappointed to come away with nothing.”

Manchester United play the first leg of the Europa League quarter-final against Spanish side Granda on Thursday (20:00 BST) before travelling to Tottenham on Sunday (16:30).