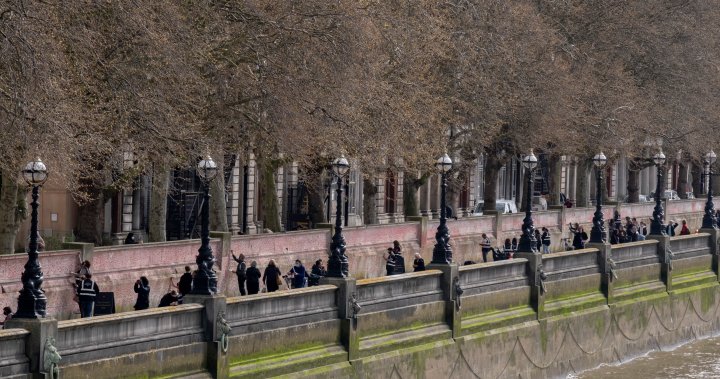 The wall is hundreds of metres long and sits directly opposite the British Houses of Parliament in London.

Yet, campaigners are unsure if it’s large enough to illustrate the memories of the British victims of COVID-19.

That running total of deaths is now almost 150,000; considerably higher than the government’s official figure of over 126,000 (the number of people who died within 28 days of a positive COVID-19 test).

Either way, the number is considerably higher than any other European country, and the U.K.’s COVID-19 deaths per capita is also among the highest in the world.

Families want answers, in the form of a public inquiry.

The U.K. government says such a move would be “premature.”

Sophie Rawlings lost both of her parents to COVID-19 within seven days of each other in January.

Her father Brian Rawlings was 75, her mother Pauline Bond was 73.

Sophie is part of CBFJU and joined a rotating team of painting volunteers at their self-titled National Covid Memorial Wall this week.

They did not seek permission from the local Lambeth borough to start the project, but the council — dominated by the U.K.’s opposition Labour Party — has effectively given its blessing.

“It’s like a nightmare I’m hoping to wake up from, still. So when I saw this was going on, I thought they deserve to be part of the wall. They deserve to be remembered like all these other people,” said Rawlings.

“They’re not numbers, they’re all names and they’re all people. And they’ve all got someone like me devastated on the other end.”

For the Londoner, the very act of painting hearts for her parents, and other victims, was a form of therapy.

“It’s the least I’ve cried in three months,” she said.

“I cry every day, all day, but coming here painting these hearts, I don’t know why, it’s just made me feel. I don’t know, nice. And I don’t know, it is therapeutic, yeah.”

The group insists the memorial is not political, but its location would suggest otherwise.

Not only is the wall visible from parliament across the River Thames, but it also backs onto St. Thomas’ Hospital, where Prime Minister Boris Johnson was treated for COVID-19 in April 2020.

The prime minister spent three days in intensive care, and later admitted: “it could have gone either way.”

He had faced heavy criticism in March 2020 for not reacting quickly enough to the pandemic, and for not treating the virus seriously.

“My own personal views. I don’t feel the scientists [were] always listened to in the way they should have been,” said Rawlings.

“I’m not knocking Boris totally, because he’s got a decision that no one would like to make, but I do think a lot of us have been through a lot that maybe could have been different.”

Fellow CBFJU member Lobby Akinnola says that is why there must be a public inquiry.

“We’re asking for an inquiry, so we can understand what happened,” said Akinnola, whose father Olufemi died of the virus.

“How we’ve ended up where we are and how we’ve lost all these lives — and just kind of understand why we have hearts to draw on this wall.”

The group has promised to remove all the hearts from the wall when they are asked to.

The U.K. government says it intends on building a permanent memorial to victims once the pandemic is over.