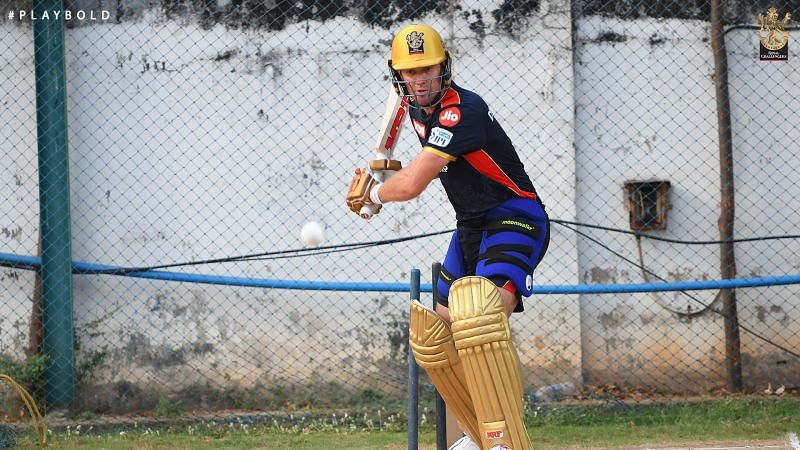 AB de Villiers can’t wait to get going with Royal Challengers Bangalore in IPL 2021. The South African ace claimed he feels as young as ever after some intense training sessions over the past few months.

The 37-year-old has featured in every IPL season since its inception in 2008. AB de Villiers made the comments during an appearance on RCB’s Bold Diaries after he came out to practice on April 7.

“I had a nice few training sessions, a lot of fitness, a lot of gym work. I feel ready and I am as young as ever so looking forward to it,” claimed de Villiers.

AB de Villiers landed in India on April 1 and has been in hotel quarantine ever since. The star batsman came out of quarantine on Thursday and took part in a training session with the rest of the squad. AB de Villiers was RCB’s third-highest run-getter with 454 runs last season, and will once again don the finisher’s role for the side.

He was satisfied with how his first training session went, but AB de Villiers admitted there were few things he needed to get right before the first game against Mumbai Indians.

“We have spent a lot of time in the room in the last week and before that, we were travelling. It was quite intense coming out. I hit the floor running and gave it my absolute best. Had a lot of fun out here tonight and I was hitting the ball okay. Not a 100% so I will come back tomorrow for a bit more,” reflected de Villiers.

IPL 2021 will be AB de Villiers’ 11th season with RCB, and he admitted to enjoying his return.

“It is very enjoyable to just be here. I am very excited to play another IPL with the RCB boys and just going to have a lot of fun this year,” said de Villiers.

AB de Villiers reveals how he prepped for IPL 2021

AB de Villiers last took to the field in IPL 2020, and the explosive batsman has not played a game since the Eliminator loss to Sunrisers Hyderabad. Discussing his training routine for this year’s edition, AB de Villiers disclosed he has been training both indoors and outdoors to get himself up to speed.

“Yeah, I have quite a few sessions for the last six weeks. Quite a few outdoors and indoors. I mixed it up nicely. When I wanted to work on shots I would go indoors and if I wanted to have a feel for the outdoors with the nibbling around a bit I would spend an hour or so in the outdoors,” concluded AB de Villiers.

Despite the arrival of players like Kyle Jamieson and Glenn Maxwell, AB de Villiers is still RCB’s marquee overseas star. The 37-year-old was seen practising wicket-keeping on his first day back in training, and AB de Villiers could once again don the gloves for RCB in IPL 2021.