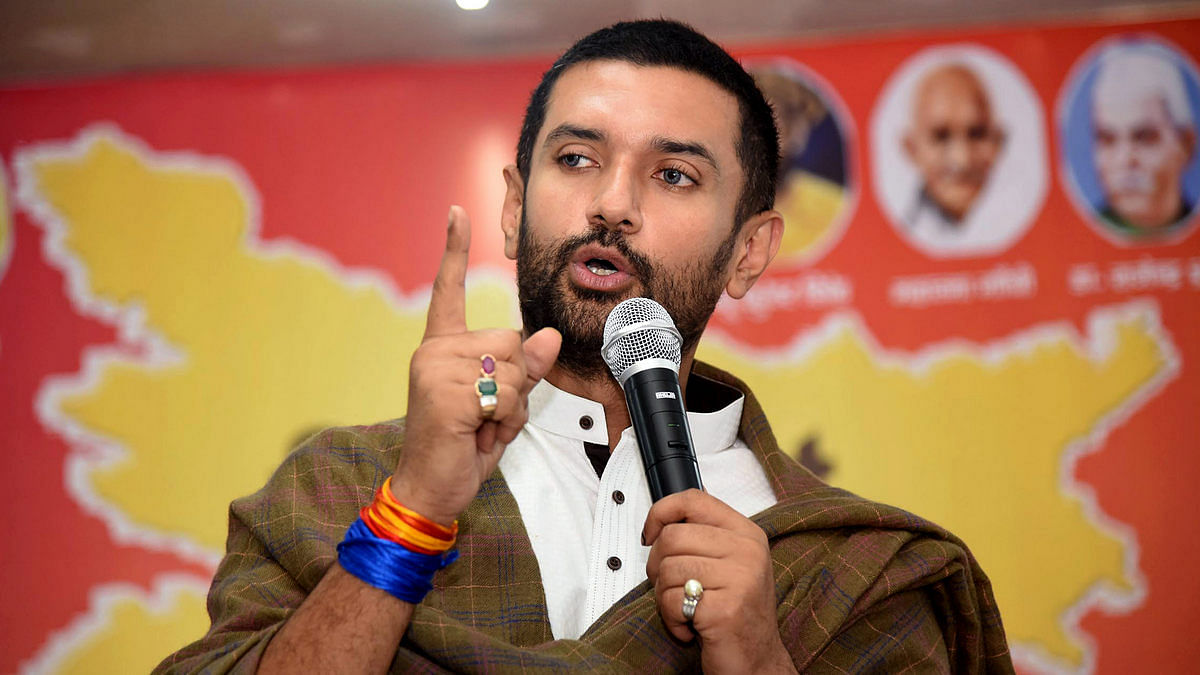 
Patna: The BJP still seems to be in a dilemma over whether to embrace or disown Lok Janshakti Party president Chirag Paswan.

In the assembly elections last year, the LJP contested all the seats that fellow NDA member Janata Dal (United) fought, and cost CM Nitish Kumar’s party crucial votes in more than 40 seats, even though it won just one by itself.

On the campaign trail, Prime Minister Narendra Modi did not say a word about the LJP or its leader, even though Chirag Paswan referred to himself as the PM’s ‘Hanuman’ and claimed there would be a BJP-LJP government after the polls.

Union Home Minister Amit Shah had declared that the LJP’s position as an NDA ally would be considered after the polls, but more than five months after the results came out and Nitish Kumar got another term as CM — albeit for the first time as the BJP’s junior partner — the national party has not addressed the issue.

The nub of the BJP’s dilemma in embracing Chirag Paswan is Nitish Kumar, who is in no mood to forgive the young leader.

Chirag inherited the conflict from his late father Ram Vilas Paswan — in 2009, Nitish created a Mahadalit section among Dalits, in which he included 21 of the 22 sub-castes but left out the Paswans. Since then, there has been an element of distrust between the LJP and the JD(U), despite spells as allies.

Since the 2020 polls, the JD(U) has gone all out to humiliate Chirag — Tuesday, Bihar assembly Speaker Vijay Kumar Sinha of the BJP notified that the lone LJP MLA Raj Kumar Singh is now a JD(U) MLA.

Singh told ThePrint that his exit from the LJP was triggered by the incidents that took place during the election of Deputy Speaker Maheshwar Hazari of the JD(U) on 24 March. Although the proceedings were boycotted by the opposition, the treasury benches insisted on a head count of MLAs, in which Hazari bagged the support of 124 MLAs in the House of 243. Singh also stood up to be counted, and as a result, was slapped with a show cause notice by his own party.

“I did not violate the party line, which is that we are with the NDA. By issuing a show cause notice, the party left me no other option but to join JD(U),” Raj Kumar Singh said.

But his exit has meant the LJP has no presence left in Bihar’s legislative assembly and council — a far cry from when he was hailed as one of the promising young leaders in Bihar.

The JD(U) has also tried to show up Chirag on other occasions, such as in February, when it engineered a massive defection of LJP office-bearers.

In late 2020, the JD(U) had also objected to Chirag’s participation in an NDA meeting in New Delhi. It opposed the LJP’s proposal to allow Ram Vilas Paswan’s widow Reena Paswan the Rajya Sabha seat vacated by his death last year, and as a result, the seat went to BJP’s Sushil Kumar Modi.

The main issue for the BJP in going against Nitish Kumar’s wishes is that it doesn’t have a leader to match the CM’s stature. Nitish remains the NDA partner with the biggest reach among backward castes, while the BJP is the leader among upper castes.

To keep Nitish happy, the BJP kept the likes of Nitish Mishra and Gyanu Singh, who had deserted the JD(U) and got elected as BJP MLAs, out of the ministry. Then, it conceded six out of 12 Governor’s quota seats in the Bihar Legislative Council to the JD(U), despite having 74 MLAs to the ally’s 43.

The state BJP leadership is evasive when asked about Chirag Paswan, but a section of party leaders strongly advocate his case.

“The central leadership should back Chirag Paswan. The JD(U) does not realise that the more it humiliates Chirag Paswan, the angrier the caste will get with Nitish, and the stronger he will emerge,” BJP MLC Sanjay Paswan told ThePrint.

Another section of leaders point out that that Chirag, if pushed to the wall, has the option of joining hands with the opposition Rashtriya Janata Dal. “The combination of (RJD leader) Tejashwi, Chirag and the Left parties will be formidable,” said a BJP leader on the condition of anonymity, stressing that the LJP leader should be included in the Modi ministry.

Praise from RJD, but Chirag staying put ‘for now’

“”The BJP always has a habit of using its allies. But it is for Chirag to decide his future course. The next election in Bihar is scheduled in 2025. There is still a lot of time for Chirag to weigh his options. He has to inherit his father Ram Vilas Paswan’s political legacy. It is still too early to write him off,” Tiwari said.

But, the LJP is downplaying the desertions “engineered by the JD(U)” and remains with the BJP “for now”, its spokesperson Ashraf Ansari told ThePrint.

“The defections and desertion hardly matter. Anyone in the party must realise that Chirag Paswan’s word is final. For now, we are with the BJP and Chirag Paswan continues to meet Delhi BJP leaders. He is currently restructuring the party. Once that is done, he will hit the roads in Bihar,” Ansari said.

“We cannot be ignored. In the last assembly polls, we did not win seats, but still got more than 6 per cent of the popular vote,” he pointed out.

The LJP is currently waiting and watching, but there is a feeling in the party that the central leadership of the BJP will come down on its side.

Also read: Modi’s ‘Hanuman’, Chirag Paswan, will find no place in his government