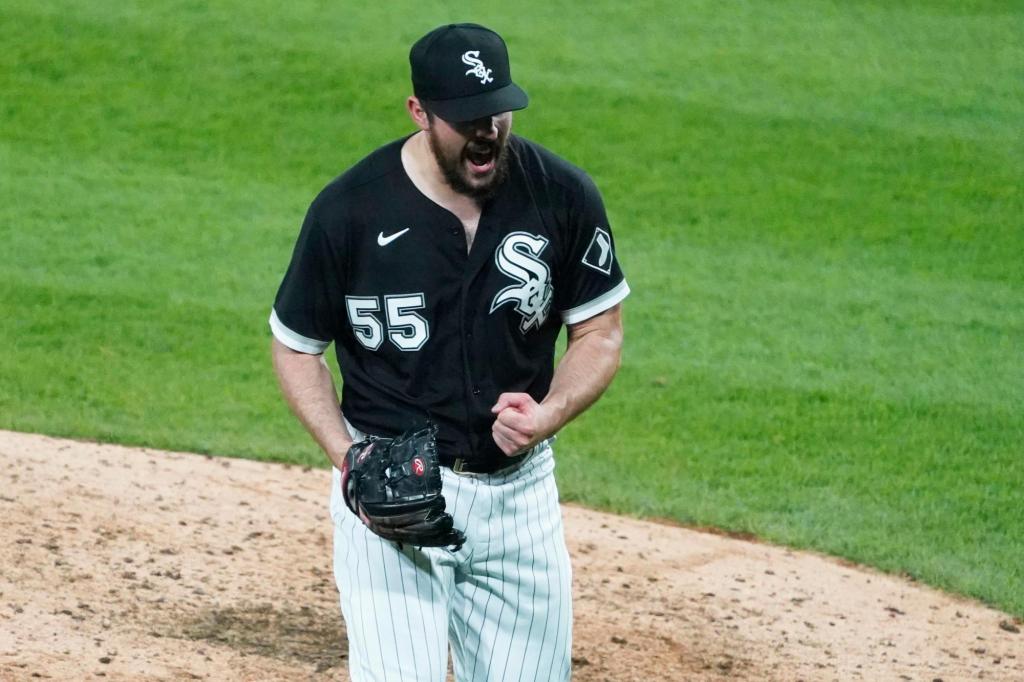 CHICAGO (AP) — Carlos Rodón threw the second no-hitter of the young baseball season Wednesday night, losing his bid for a perfect game on a hit batter with one out in the ninth inning, and the Chicago White Sox cruised to an 8-0 victory over the Cleveland Indians.

The left-hander retired his first 25 batters before he plunked Roberto Pérez on the back foot with an 0-2 slider. An incredulous Rodón looked on almost in bewilderment as Pérez made his way to first.

Rodón regained his composure in time to strike out Yu Chang looking and retire Jordan Luplow on a sharp grounder to third, starting a joyous celebration. The crowd of 7,148 cheered as Rodón (2-0) jumped around with teammates near the mound and then started handing out hugs.

It was the first no-hitter for the White Sox since Lucas Giolito pitched one Aug. 25 last year against Pittsburgh and No. 20 in franchise history, second-most among major league teams behind the Los Angeles Dodgers (23).

Rodón’s gem came just five days after Joe Musgrove threw a no-hitter for his hometown Padres at Texas — the first no-no in club history. San Diego had been the only big league franchise without a no-hitter.

Working quickly in short sleeves with the top of his jersey unbuttoned on a cool Chicago night, Rodón threw 75 of his 114 pitches for strikes. The No. 3 pick in the 2014 amateur draft out of North Carolina State struck out seven in his first career shutout and second complete game.

The closest call for Rodón and the White Sox occurred when Josh Naylor led off the ninth with a slow bouncer. First baseman José Abreu picked it up and got his toe on the bag just ahead of a sliding Naylor.

The call stood after a video review, delighting the bundled-up crowd.

The game-time temperature was 45 degrees, and most of the other players had on long sleeves. But the cold didn’t seem to bother Rodón at all.

He was in control right from the start. Franmil Reyes saw eight pitches leading off the fifth, but he bounced to third on a 2-2 offering. The crowd cheered loudly when José Ramírez lined to left on a 3-1 pitch for the final out of the seventh.

“He kind of overwhelmed us,” Indians manager Terry Francona said. “When he’s good, he gets stronger as the game goes on and you saw him touch 99 (mph) on pitch 110 and his breaking ball got better and he even threw some changeups. He got into a rhythm and just got stronger as the game went.”

Rodón was helped by a six-run first inning that included another long homer by rookie Yermin Mercedes, one of baseball’s biggest surprises early in the season.

With one out and runners on the corners, Mercedes turned on a Zach Plesac fastball and drove it an estimated 431 feet to left for his third homer. He went 3 for 5 to run his batting average to .500 (19 for 38).

Leury García hit an RBI double and scored on Nick Madrigal’s single before Francona pulled Plesac (1-2) with two out. It was the shortest start of Plesac’s career.

Indians: Pérez was in the starting lineup a day after he got crossed up with reliever James Karinchak in the 10th inning and ended up catching a pitch barehanded. “I checked with him this morning and the trainers checked with him. He’s fine,” Francona said.

White Sox: RHP Dylan Cease was placed on the injured list and RHP Zack Burdi was recalled from the team’s alternate site. Cease has some symptoms associated with COVID-19, but general manager Rick Hahn said the pitcher hasn’t tested positive. The team is working on a plan in case Cease is unable to pitch Friday at Boston. … OF Adam Engel (strained right hamstring) thinks he could return during the team’s next homestand beginning on April 23. Engel got hurt during spring training and had a setback during rehab, but he said he is feeling much better. “Making really good progress,” he said. “I’ve had a lot of really good days in a row now.”

Right-handers Aaron Civale and Lance Lynn pitch in the series finale Thursday afternoon. Civale (2-0, 2.45 ERA) tossed 7 2/3 innings of three-hit ball in Cleveland’s 11-3 victory over Detroit on Saturday. Lynn (1-0, 0.00 ERA) is coming off his second career shutout, striking out 11 during a 6-0 victory over Kansas City in Chicago’s home opener last week.

Jay Cohen can be reached at https://twitter.com/jcohenap