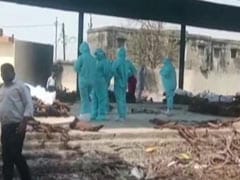 Over 5,000 people have died in the state due to Covid so far. (File photo)

Joint Director in the state’s health department, Dr Subhash Pandey, was among those who died due to COVID-19 complications, he said.

The fresh daily tally was lower than 15,121 COVID-19 cases reported on Tuesday, the highest single-day spike so far in the state.

The state has recorded over 1.68 lakh cases and 1,417 deaths just in the last one month.The number of active cases in the state stood at 1,18,636 after 88 people were discharged from hospitals while
2,441 others completed their home isolation period in the day, the official said.

With this, the number of people who have recovered from the infection increased to 3,62,301.

Of the latest fatalities, 73 were reported on Wednesday and Tuesday, while 47 deaths occurred earlier but were added to the list now, he said.

Health department official Pandey, who was also a spokesperson of the states Covid Command and Control Centre, was admitted to the All India Institute of Medical Sciences (AIIMS) Raipur after he had tested Covid positive, he said.

With 46,528 more samples tested for coronavirus detection, the number of tests conducted so far in the state went up to 63,62,947, the official said.