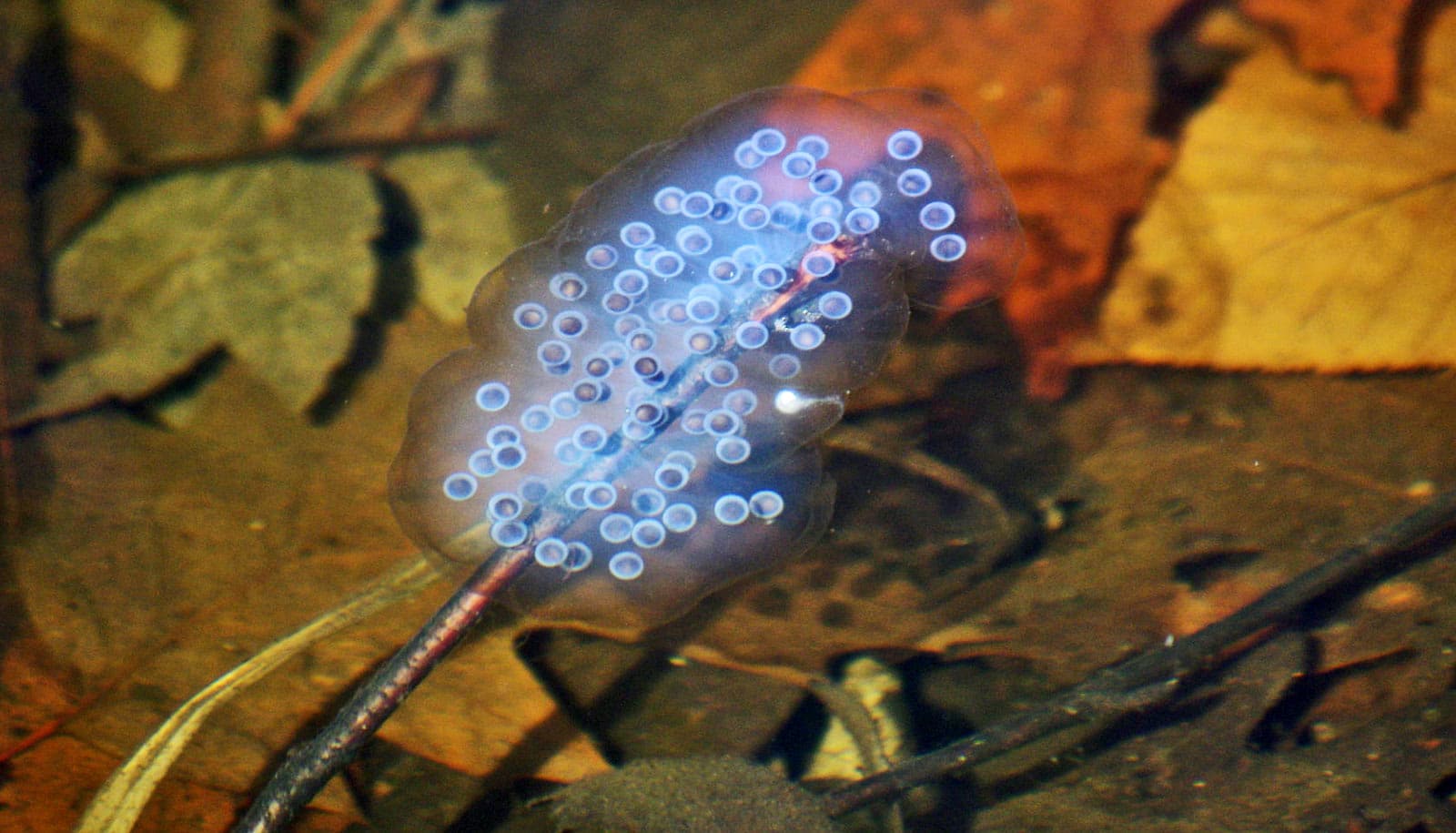 Understanding the processes that maintain biological diversity in wild populations is a central question in biology and may allow researchers to predict how species will respond to global change.

Spotted salamanders (Ambystoma maculatum) are a widespread species that occur across the eastern United States and return to temporary ponds in the spring to reproduce. Female salamanders lay their eggs in clumps called egg masses, which are either opaque white or completely clear. Females lay the same color egg masses throughout their life, but it is unclear what causes the different coloration, or if either of these colors confers an advantage to the eggs—for example if one color is less obvious to predators.

“We usually think of evolution operating over hundreds or thousands of years, but in reality, the evolutionary processes at play in a system can influence each generation of animals,” says Sean Giery, postdoctoral research fellow at Penn State and leader of the research team. “In this study, we resurveyed ponds that were originally studied in the early 1990s, which gave us a unique opportunity to explore the evolutionary processes that shape the frequencies of the two egg mass color types, or morphs, that we see today.”

Giery resurveyed a network of 31 ponds in central Pennsylvania, noting the color of salamander egg masses as well as environmental characteristics at each pond. In 1990 and 1991, biology professor Bill Dunson and students originally surveyed the ponds. The new study appears in the journal Biology Letters.

The research team found that salamander population sizes and pond chemistry remained stable over the last three decades. When averaged across the region, the overall frequency of each egg color morph also remained the same—about 70% white egg masses in both 1990 and 2020—but in many cases the frequency within individual ponds changed drastically.

“At the scale of individual ponds, it’s an extremely dynamic system,” says Giery. “They don’t just reach one frequency and stay there. By focusing on individual ponds rather than just the region as a whole, we could tease apart what is driving these changes in population frequencies. In this case, we found two opposing evolutionary processes—selection and drift.”

The researchers uncovered strong signatures of an evolutionary process called genetic drift, which can result in morph frequencies changing due to chance. In small populations, drift is more likely to have a major effect, for example with one of the morphs disappearing entirely. As expected due to drift, the researchers found that the frequencies of each morph changed more dramatically in ponds with fewer egg masses.

“However, none of the ponds completely shifted to one morph or the other, which suggests something else might also be going on,” says Giery. “We found that ponds at the extremes in the 1990s—with a high frequency of clear or a high frequency of white egg masses—became less extreme, shifting toward the overall mean for the region. This supports the idea that ‘balancing selection’ is operating in this system.”

Balancing selection is a type of natural selection that can help preserve multiple traits or morphs in a population. According to Giery, one possible explanation for balancing selection in egg mass color is that the rare morph in a pond—regardless of the actual color—has an advantage, which would lead to the rare morph becoming more common. Another possibility is that the white morph has an advantage in some ponds while the clear morph has an advantage in others, and movement of salamanders between the ponds leads to the persistence of both morphs.

“Ultimately we found a tension between these two evolutionary processes, with genetic drift potentially leading to a reduction of diversity in this system, and balancing selection working to maintain it,” says Giery.

The researchers are currently surveying egg masses in ponds outside of Pennsylvania to explore if morph frequencies differ in other regions and whether these evolutionary processes operate in the same way over a larger scale.

“Although we did not see a relationship between egg mass color and environmental characteristics in this study, it’s possible that environmental characteristics at a larger scale might drive an optimal frequency for each region,” says Giery. “By looking at a much larger scale, we can get a better idea of whether there are regional optimums and how they are maintained. Understanding the processes that maintain biological diversity may ultimately help us predict how wild animals will adapt in our changing world.”