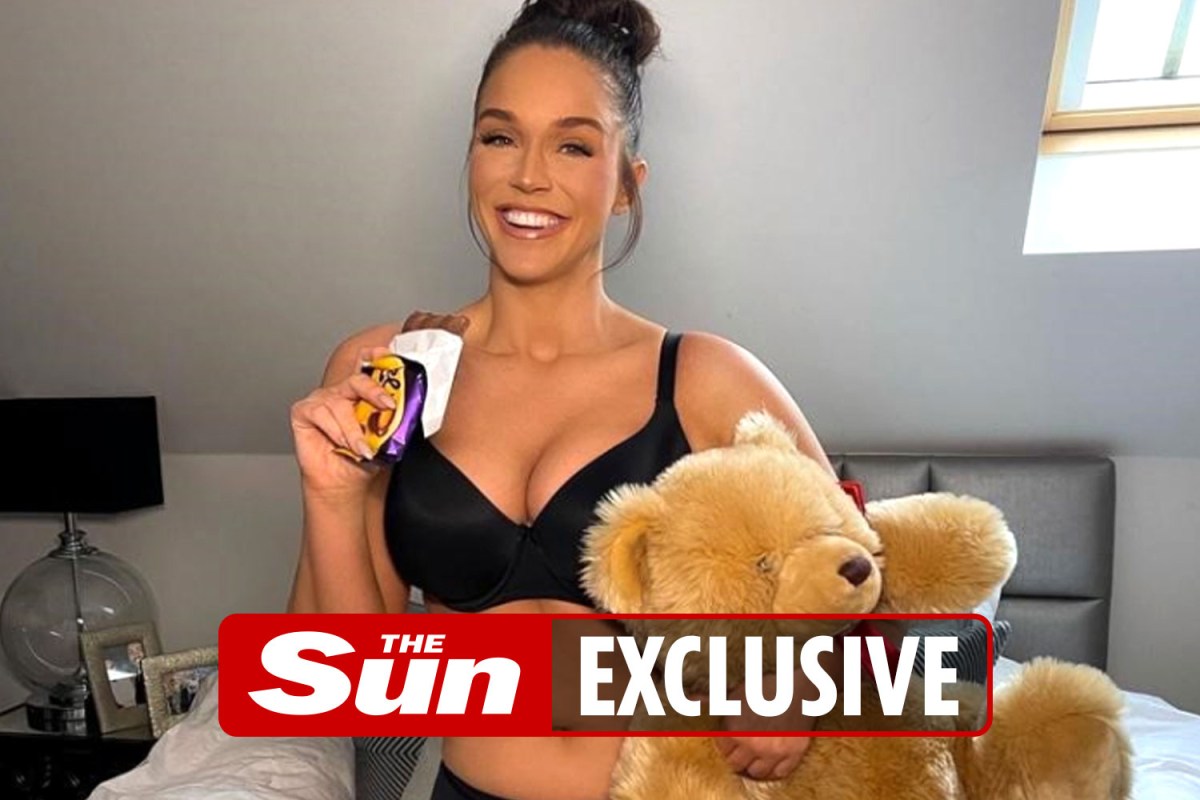 VICKY Pattison revealed she used to be “obsessed” with editing social media pictures, before embracing her ‘real body’.

The former Geordie Shore star, 33, has been on a mission to show her 4.7 million Instagram followers a less filtered feed in recent years.

Speaking to Fabulous for Bodyform’s #PeriodProud campaign and the launch of the brand’s Intimawear period pants, she says: “A couple of years ago, I was really obsessed with putting forward a strong, glossy and perfect image on social media.

“I think everyone was in that stage a couple of years ago, it wasn’t just me. Every time I’d get papped I’d be furious, like ‘what the hell? This looks nothing like the picture of myself I put on social media this morning, what are people going to think?’

“Actually it’s because I was over-using filters, I was obsessed with great angles. And you know what?

“There’s nothing wrong with wanting to put your best foot forward on social media, just as long as you’re willing to show your downsides too. It’s all about balance.

“I only wanted to show the amazing pictures and the highlights but what I’ve realised over the last couple of years is, actually what resonates with people is showing the down bits.

“It’s been a journey for me, but I’d always encourage people to show the honest side of you.

“I preach so much about body positivity but I still love a filter when I’m not feeling my best. There’s nothing wrong with it once in a while if it makes you feel better.”

At the core of Vicky’s change of heart is making sure her followers don’t feel “inadequate” while comparing themselves to her perfect pictures.

She says: “There’s a lot of carefully curated images on Instagram at the moment of beautiful bodies, perfect families and just unobtainable messages.

“As a woman in my 30s, if I’m looking at those feeling inadequate thinking ‘I’m never going to look like that’ or ‘maybe I should be having kids’ or ‘oh my God, my house is never going to be that tidy’, then there must be thousands of other women thinking the same thing.

“I dread to think what it must be like for women in their 20s or in their teens, God even younger.

“And I just really worry that they’re going to be feeling, yes inadequate, yes under pressure, but also the huge ramifications we’re going to feel on our mental health.

Every time I’d get papped I’d be furious, like ‘what the hell? This looks nothing like the picture of myself I put on social media this morning?’ But it’s because I was over-using filters, I was obsessed with great angles

“I just wanted to give women an alternative to this constant bombardment of perfection. To show them that we all have down days and you can still be beautiful if your skin isn’t perfect or you’re on your period.

“You can still be smashing it, even if you don’t have it all figured out. I was feeling the pressure and I consider myself to be pretty secure and well rounded, so I just wanted to show an alternative.

“I’ve made a real conscious effort over the last couple of years to be a breath of fresh air and normality.

“Because ultimately all we’re doing is comparing our behind the scenes to other people’s highlight reels. It’s not healthy.

“More often than not, what we’re looking at isn’t even reality anyway.

“I think we all need to be a bit kinder to ourselves when it comes to social media, even the people who are posting those perfect images, I can imagine that’s quite a lot of pressure as well.”

Having first appeared on Geordie Shore in 2011, followed by stints on Ex on the Beach, being crowned Jungle Queen on I’m a Celebrity and making it to the final of Celebrity MasterChef, Vicky is already a reality TV veteran.

As a result, she’s endured a decade of trolling – something she’s decided not to stay silent about anymore.

She says: “Given I’ve been in this job for 10 years and I’ve been in the spotlight for most of my adult life, I would say I’ve had my fair share of trolling.

“I used to properly take it on the chin and accept it was part of the territory.

This nastiness of online trolling seems to find everybody and I don’t think it’s acceptable. It’s born out of jealousy and bitterness

“But actually it’s become bleedingly obvious to me it happens not just when you’re in the spotlight, if you’re an influencer or you’ve got a nice home account or you’re a mummy blogger, even if you’ve just got a local business.

“Whether you’re Khloe Kardashian or you’ve got a local florist, people seem to think if you’re putting yourself out there then they’ve got the right to drag you down. And actually absolutely no-one has that right.

“People are putting themselves out there and trying to change the world for the better, but that riles people and shows them what they’re not doing.

“I think that’s what it’s mostly born out of, jealousy and bitterness and a feeling that they are quite stagnant in their life.

“I’ll always chat about this, if people are committed to not understanding me or being nasty about me on social media, I doubt me telling them not to is going to do anything, but it makes me feel better.

“And I think it lets people know that actually if you are trolling me, I’m not going to be silent about it.

“Some days I’m in a really positive mind space and it’s easy to not take much notice. But it’s hard to remain thick skinned when people are attacking you as a person.

“When you’re a reality TV star, when someone has something nasty to say I know it’s about me as a person and that’s always a difficult pill to swallow.

“I’m sensitive, it doesn’t matter how long I’ve been in this industry, I’ll always take things to heart.

“If anyone’s thinking of writing something nasty on social media, I would say ‘everyone’s got our troubles and this year has been hard for everyone, so maybe just be mindful before you type?’

“I’m sure I’m not going to change anybody’s mind. It doesn’t hurt to try though.”

Since 2019, Vicky has been loved up with former Towie star Ercan Ramadan, 37.

She met him just months after splitting from fiance John Noble, over a video of him cuddling up to another woman in Dubai.

The couple spent lockdown together in Vicky’s Brentwood flat and are currently in the process of moving into her £1.5 million “dream home”.

Vicky says: “I think everyone can relate to struggling with their body image over the past 12 months. It went on a lot longer than I anticipated, I just lost all motivation.

“I probably wasn’t in the best shape of my life over the past year, I’m probably still not, but I’m also very aware there’s far more important things to worry about.

“I wanted to be healthy, happy and get through what has been one of the hardest years of most people’s lives.

“So I comfort ate and had nights on the sofa with Ercan and probably one too many takeaways, but if that’s what it took us to get through. If I needed the odd glass of wine or a cheese board, who cares?

I probably wasn’t in the best shape of my life over the past year, I’m probably still not, but I’m also very aware there’s far more important things to worry about

“I think we’ve all found solace in different places. If you were one of the women like me who needed a nice hot bath and a glass of wine, or five minutes away with a bag of Maltesers in a cupboard, that’s OK.

“Over the last 10 years, my body with my relationship has changed loads. I’ve stopped seeing my body as a vessel and more as something I’m really proud of for getting through every day.

“I like working out when I can because it makes me feel strong and it’s a real mood booster, rather than seeing it as a punishment for what I’ve eaten and in a desperate pursuit of a body shape that’s never going to be achievable for me.

“It’s definitely been a huge journey for me to come to this moment of acceptance, but I think a lot of women in their 30s go through it.

“It’s so liberating when you finally get there and you’re like ‘oh OK, I’m over it’. You stop stressing about looking a certain way and actually focus on how you feel instead.”

She says: “I don’t think enough women talk about our periods enough, I know growing up no-one talked to me about mine, which led me to feel really embarrassed about them.

“I want to encourage women to have an open dialogue about all things to do with their bodies.

“For me, I can’t wait for my period to be over so I’ll always rush it and leave the house in a nice pair of knickers, thinking I’m over the worst of it, then the next thing you know I’ve come on my period and I’m in my thong with nothing on me, it’s just always super stressful.

Is Emily Ratajkowski’s baby diary the most braggy ever?

I pushed AJ away, says Abbie Quinnen after suffering burns in fireball accident

“What I love about these pants is that you can just wear them because they look like normal underwear. It will just be nice to stop ruining my nice knickers.”

Last week, Vicky revealed how she felt “sexier than ever” with boobs and a bum, in another exclusive chat with The Sun.

Intimawear by Bodyform™ is now available at Tesco stores, Tesco.com and shop.bodyform.co.uk for £24.99. You can shop the brand’s Depop here.