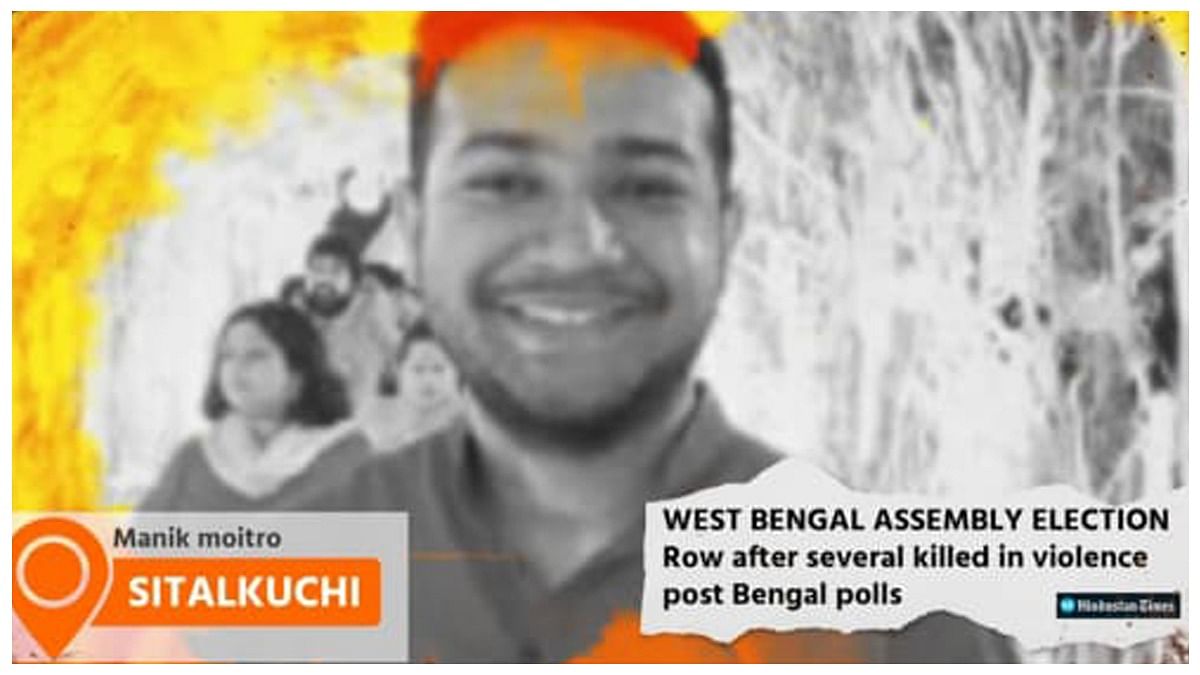 
New Delhi: A video of the purported post-poll violence in West Bengal posted on different social media platforms has created a lot of buzz, with many BJP supporters and their groups widely sharing it.

BJP leader Rahul Sinha also shared the video on his Twitter handle with a caption that read in Bangla: “Mamatar khuner khela (bloodbath by Mamata)”.

It shows the image of one Manik Moitro, among others, who it claimed had been killed in violence by Trinamool Congress (TMC) workers in the Sitalkuchi constituency after the assembly election results were declared Sunday.

The video, however, left a journalist shocked as he found that it was his image that was passed off as that of ‘Manik Moitro of Sitalkuchi’.

Reacting to the post, India Today journalist Abhro Banerjee took to Twitter Thursday and claimed that the image shown in the video was his, and that he was “hale and hearty”, and far away from Sitalkuchi.

“I am Abhro Banerjee, living and hale and hearty and around 1,300 km away from Sitalkuchi. BJP IT Cell is now claiming I am Manik Moitra and died in Sitalkuchi. Please don’t believe these fake posts and please don’t worry. I repeat: I am (still) alive,” Banerjee wrote.

I am Abhro Banerjee, living and hale and hearty and around 1,300 km away from Sitalkuchi. BJP IT Cell is now claiming I am Manik Moitra and died in Sitalkuchi. Please don’t believe these fake posts and please don’t worry. I repeat: I am (still) alivehttps://t.co/y4jKsfx8tI pic.twitter.com/P2cXJFP5KO

The video, which Banerjee provided a link for, was found on the West Bengal BJP’s timeline either on Facebook or Twitter.

In an official statement issued Thursday evening, the West Bengal BJP said Banerjee’s photo was included in the video by mistake.

“The image of Mr. Abhro Banerjee was erroneously included in the video while using an article by him as a source for the content, the same is hyperlinked here, along with the image link that appears while running the search,” read the statement, which was shared along with a 4 May article by Banerjee on the post-poll violence in West Bengal.

It also clarified that Manik Moitro (who was mentioned in the video) succumbed to the injuries he received in the violence “instigated and inflicted by TMC members” in Sitalkuchi.

The BJP statement also included the image of a wrapped body on a hospital stretcher, claiming it to be of Moitro.

After the assembly elections results were declared on 2 May, violence was reported from different parts of West Bengal.

The BJP has claimed that the violence is being perpetrated by TMC goons. Many BJP leaders, including J.P. Nadda, Sambit Patra, Himanta Biswa Sarma and others, have called out Chief Minister Mamata Banerjee and her party.

The BJP even staged a nationwide dharna Wednesday to protest against the violence even as party president Nadda flew down to Kolkata.

“Mamata Ji’s silence speaks about her involvement in these incidents and she’s starting her third term with blood on her hands,” he said.

Mamata Ji’s silence speaks about her involvement in these incidents and she’s starting her third term with blood on her hands.

BJP Assam leader Himanta Biswa Sarma said many were fleeing to his state following the violence.

In a sad development 300-400 @BJP4Bengal karyakartas and family members have crossed over to Dhubri in Assam after confronted with brazen persecution & violence. We’re giving shelter & food. @MamataOfficial Didi must stop this ugly dance of demonocracy!

The Trinamool Congress has dismissed the BJP’s claims, with Banerjee saying the party was “spreading lies using old pictures of riots that did not take place in Bengal”.

The West Bengal Police also took to social media claiming some of the allegations as “fake news”.

The TMC also said four of its workers were killed in the post-poll violence, while the Indian Secular Front, a Congress-Left ally, said one of its men died in North 24 Parganas district.

This report has been updated to include the BJP’s statement on Abhro Banerjee’s photo in the video and death of Manik Moitro.