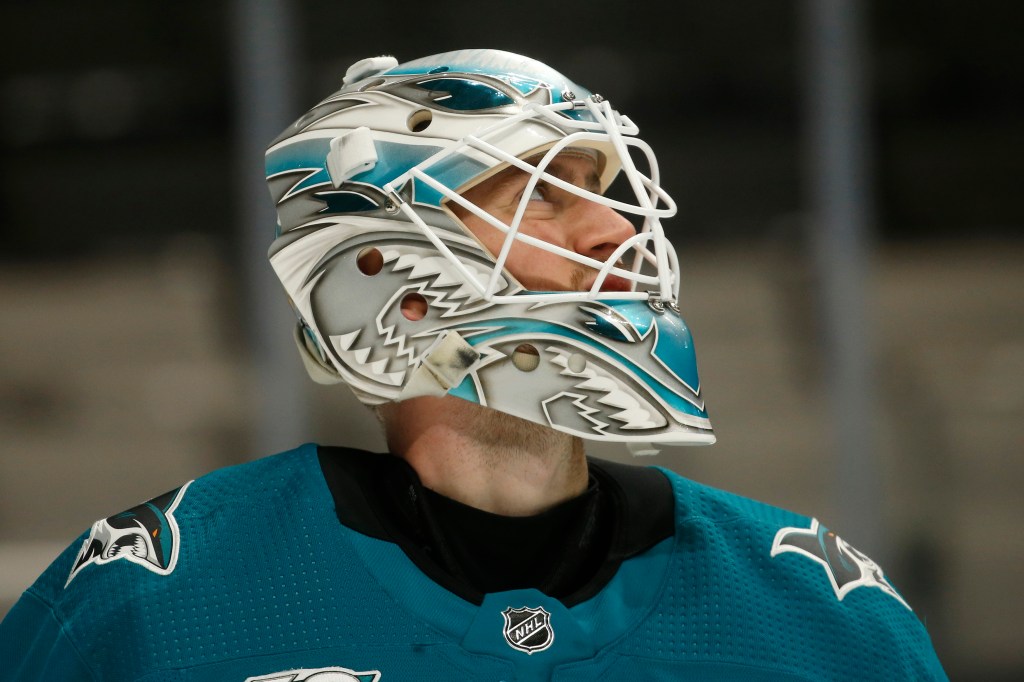 SAN JOSE – Goalie Martin Jones will not start either one of the Sharks’ games this weekend with the Arizona Coyotes, leaving open the possibility that he may have already played his last game with the team after six seasons in teal.

Sharks coach Bob Boughner said goalie Josef Korenar will start Friday’s game with the Coyotes and Alexei Melnichuk will likely go in net Saturday in what would be his first career NHL start. Melnichuk was one of three players the Sharks recalled from the Barracuda on Thursday and added to their taxi squad.

The Sharks, who have been eliminated from playoff contention, finish their season Wednesday at home against the Vegas Golden Knights. Boughner said he did not know which goalie would start that game, although it wouldn’t be a surprise to see Jones finish the season.

“I think all the veterans know that we’re trying to get a look at some guys and need to get a read on some players,” Boughner said. “There’s been some player movement here in the last couple of weeks up and down. It wouldn’t be a shock to any of these guys what we’re doing this weekend.”

Jones has gone 0-5-2 with a .857 save percentage in his last eight games, although poor puck management and sloppy defense by his teammates contributed to his struggles. Jones’ save percentage so far this year is .896, the same as it was the last two seasons.

The Sharks have a team goals-against average this year of 3.19, fifth-worst in the NHL.

Boughner’s frustrations with his team’s inability to keep the puck out of the net became evident after the Sharks’ loss to the Colorado Avalanche on Monday when Jones allowed five goals on 31 shots.

Asked how the momentum changed after San Jose blew a two-goal lead in the third period and lost 5-4 in overtime, Boughner said, “I don’t know. Three bad goals. Didn’t get a save. You guys watched the game. It’s pretty obvious.”

In the meantime, Korenar, 23, has started to look more comfortable. He has won three of his last four starts, including Wednesday’s game with Colorado when he stopped 30 of 32 shots in a 3-2 Sharks win over the Avalanche. Korenar has a .902 save percentage in nine games.

The Sharks hope that getting Melnichuk, 22, a bigger taste of the NHL now will help him in the long run.

“Part of that is a reward as well,” Boughner said. “We said at the beginning of the season that the guys that have played well and dug in and really committed to elevating their game down there, that hopefully, they would get a shot here.

Jones, originally acquired by general manager Doug Wilson in the summer of 2015 from the Boston Bruins, played in 60 postseason games from 2016 to 2019 when the Sharks won six playoff rounds, including three in 2016 when the Sharks advanced to the Stanley Cup Final and two in 2019 when they made to the Western Conference final.

But the Sharks’ goaltending has been among the worst in the NHL for three straight years, and upgrading the position will presumably be one of Wilson’s top priorities this summer.

Jones has three years remaining on the six-year, $34.5 million contract extension he signed with the Sharks in July 2017, a deal that has an average annual value of $5.75 million.

If the Sharks wanted to part ways with Jones, they could try to trade him to another team and retain up to half of his salary cap hit or buy out the remaining years of his deal. Jones, per CapFriendly, has a modified no-trade clause in which he submits a list of three teams to which he would accept a trade.

Melnichuk, who signed with the Sharks out of the KHL a year ago, is thought to be one of the brighter prospects in the Sharks’ system even though he has had an up-and-down season with the Barracuda. In 17 AHL games, Melnichuk has a 7-7-3 record with a .868 save percentage.

Melnichuk made his NHL debut Feb. 11 when he relieved Martin Jones in the third period of a game with the Los Angeles Kings. Melnichuk played the final 9:11, stopping all five shots he faced in a 6-2 Sharks loss to the Kings.

“He’s gone down and played a lot of hockey for the Barracuda, which is nice,” Boughner said. “He’s gotten acclimated with the game and the professional life over here in North America, so I’m excited for him to see if he can transfer that to this level.

“You’re not basing his whole season on one game playing for us, but I know he’s battled hard for (the Barracuda). He’s an active goalie, he’s athletic, and he’s got a ton of energy.”