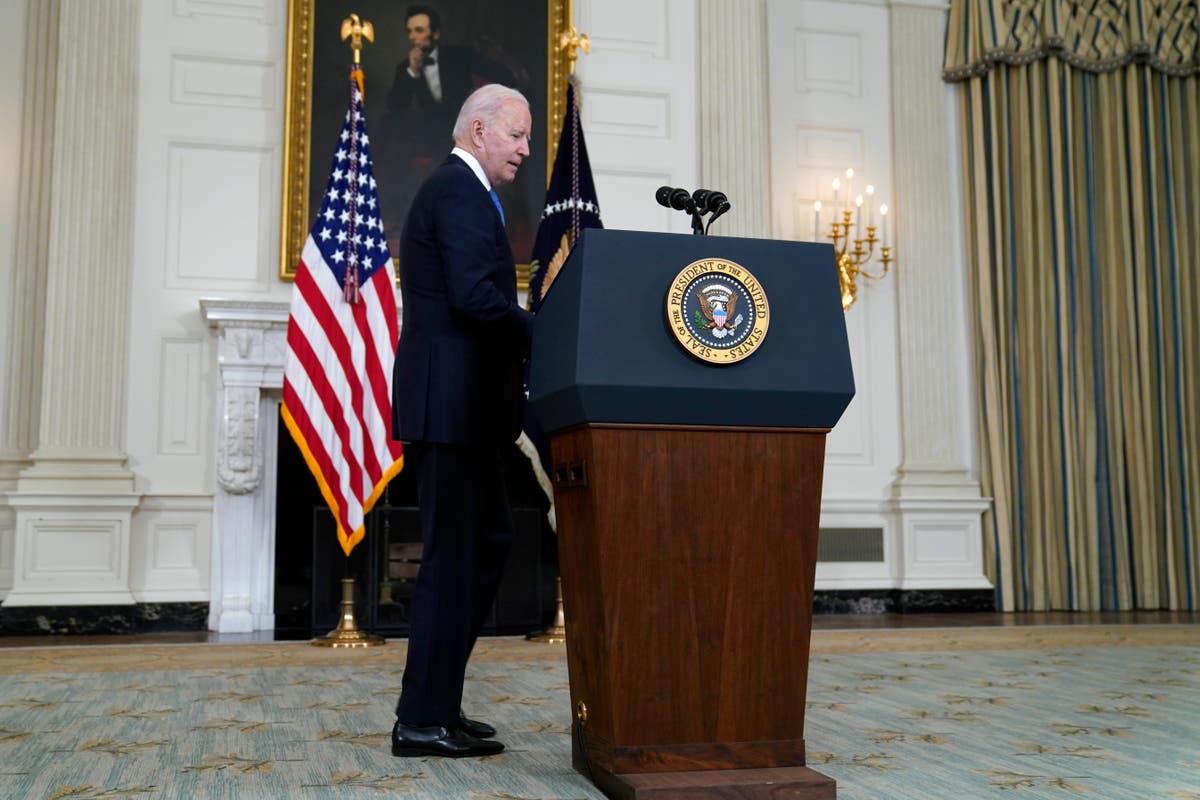 United States Trade Representative (USTR) Katherine Tai announced the proposal on Wednesday ahead of a World Trade Organisation (WTO) debate on the waiver after a small number of wealthy countries vetoed it.

“I applaud the Biden administration for taking this bold step to speed up the production and availability of coronavirus vaccines,” wrote Mr Sanders. “I also recognize the dedicated work done by activists around the world to put this issue on the global agenda. We are all in this together.”

Ms Ocasio-Cortez tweeted out her support for other moves on high-priced essential medications: “Let’s do insulin next.”

The waiver announcement comes as Mr Biden described the GOP as being in the midst of a “significant sort of mini revolution” amid attempts to oust No. 3 House Republican Liz Cheney.

“I think Republicans are further away from trying to figure out who they are and what they stand for than I thought they would be at this point,” he said.

Florida’s new legislation to make voting more difficult hasn’t attracted the same national attention as Georgia’s, but it still marks another victory for Republican efforts to make participating in the democratic process more onerous for groups that tend not to vote their way.

Governor Ron DeSantis is signing the bill today, but hasn’t allowed the wider news media into the room – just the GOP’s preferred outlet.

US jobless claims continue to drop

Good news for the American worker: the nationwide number of jobless claims has hit its lowest level since the pandemic began crushing the US economy, auguring well for the prospect of economic recovery.

Jared Kushner stays in the game on Middle East peace

Despite his lack of experience on the issue Donald Trump’s son-in-law Jared Kushner was put in charge of the last administration’s diplomatic efforts to advance peace in the Middle East. At the end of the Trump years, the administration announced it had brokered deals with several Arab countries that would see them officially recognise Israel for the first time.

Now, Mr Kushner is launching a new group, the “Abraham Accords Institute for Peace”, that will work to stabilise the agreements – which were opposed by many Palestinian groups, who say the Arab nations that signed them violated their promises not to make peace with Israel until it withdraws from occupied Arab lands.

US will ‘respond’ to ‘reckless or aggressive’ actions by Russia, vows Antony Blinken

Antony Blinken, the US secretary of state, has warned Moscow that Washington will “respond” to any acts of aggression or recklessness carried out by the Russian government.

Speaking during a meeting of G7 ministers in London, America’s top diplomat attacked Vladimir Putin’s administration over its treatment of Kremlin critic Alexei Navalny and interference in US presidential elections.

Mr Blinken also spoke out against what he said was Russia’s “cyber intrusion” during the hacking of the US tech company SolarWinds last year.

Joe Biden has responded to Senate Minority Leader Mitch McConnell‘s comment that he will dedicate “100%” of his focus “on stopping this new administration”.

“Look, he said that in our last administration, (with former President) Barack (Obama, that) he was going to stop everything – and I was able to get a lot done with him,” Mr Biden told reporters on Wednesday.

“Again, look – everything I’m proposing that be done to generate economic growth, employment, and put us in a position where we can out-compete any other country in the world with research and development, and moving ahead: I pay for it.”

Senator Bernie Sanders has praised the Biden administration for backing a patent waiver for Covid-19 vaccines, describing it as “the kind of leadership the world needs”.

The senator for Vermont said in a statement: “I applaud President Biden and his administration for taking this bold step in response to the world’s most urgent crisis. Our vaccination efforts here at home will only be successful if vaccination efforts in the developing world happen simultaneously.

“Supporting this waiver, and putting people over profits, will help us to do that by speeding up the production and availability of vaccines. This is exactly the kind of leadership the world needs right now.

“I also recognise the dedicated work done by activists in communities around the world to put this issue on the global agenda. We are all in this together.”

China has rejected criticism by the Group of Seven of its human rights and economic record, accusing foreign ministers of meddling in its affairs.

A statement by G-7 diplomats in London on Wednesday “made groundless accusations” against China said a foreign ministry spokesperson, Wang Wenbin. He accused them of “blatantly meddling” in China’s affairs.

“China strongly condemns it,” Wang said at a press briefing.

Animal rights groups hit out at Republican campaigning with bear

A businessman running a campaign for governor in California has prompted backlash from animal rights activists after he launched his campaign alongside a 1,000-lb bear.

John Cox hired the Kodiak bear, which features heavily on his campaign adverts and website, to kick off his campaign for the recall against incumbent Gavin Newsom in Sacramento on Tuesday.

The animal could be seen milling about behind the candidate as he discussed his plans to make “big, beastly changes in Sacramento,” with an electrical wire separating the bear from the crowd.

EU ‘ready to discuss’ US proposal for vaccine patent waiver

The bloc is exporting more than 200 million vaccine doses globally, while vaccinating 30 Europeans per second.

“The EU is also ready to discuss any proposals that addresses the crisis in an effective and pragmatic manner,” Ms von der Leyen said in a speech to the European University Institute in Florence.

“That’s why we are ready to discuss how the US proposal for a waiver on intellectual property protections for Covid-19 vaccines could help achieve that objective.”

Joe Biden to argue for $2.3 trillion infrastructure plan in Lousiana

Joe Biden will make the case for his $2.3 trillion infrastructure plan in the Republican state of Louisiana on Thursday, pushing back against GOP lawmakers who advocate trickle-down economics.

The president will speak in the city of Lake Charles in front of a 70-year-old bridge that is 20 years past its designed lifespan.

Mr Biden is trying to convince Republican voters that higher corporate taxes can generate revenue of $115bn for infrastructure like roads and bridges, as well as hundreds of billions of dollars more to upgrade the electrical grid, make the water system safer, rebuild homes and fire up the manufacturing of electric vehicles.