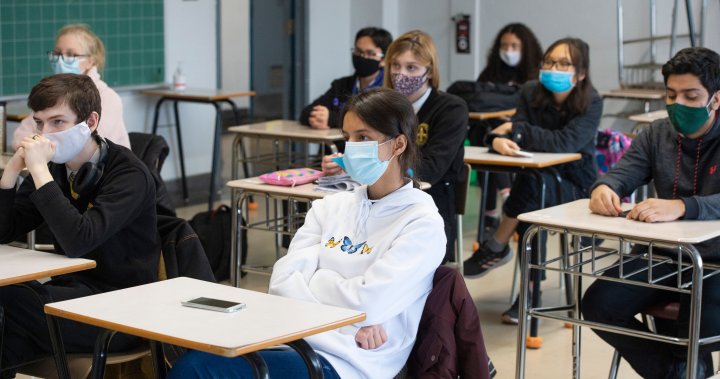 Quebec is widening its COVID-19 immunization campaign to include adolescents aged 12 to 17, the province’s health minister said Thursday.

Christian Dubé announced the measure one day after Health Canada authorized the Pfizer-BioNTech vaccine for children 12 and up. Teams are already preparing for the rollout next month.

The goal is to offer a first dose to that age group by the end of school year. Dubé said the booster will be given before students return to class in the fall.

”We’re so pleased with this news because it’s good for the people that will be vaccinated, and good for the population in general,” he said. ”We’re back to school in September, and this is behind us.”

The latest expansion comes as Dubé says 40 per cent of eligible Quebecers have received a first shot. Since December, more than 3.4 million doses have been administered in the province.

The province is gradually lowering the age of vaccine eligibility, with appointments set to open to anyone 35 and older starting Friday.

Under the plan, Quebec has promised to offer appointments to all adults by mid-May. The government’s goal is to give a first dose to anyone over the age of 18 by June 24.

Officials also stress that immunization is key to keeping the pandemic under control. The director of Quebec public health said it will help in easing restrictions designed to limit the spread of COVID-19.

“We more we vaccinate, the more we can deconfine,” Dr. Horacio Arruda said.

Quebec will also soon start offering electronic proof of vaccination. Dubé explained that adults can ask for a QR code, which will then be sent by email.

“Paper proof, however, will still continue to be given at sites after vaccination,” he said.

0:50
Quebec to provide QR code as digital proof of vaccine starting next week

When asked if that may be considered a vaccine passport, Dubé said “not at this time” and that the proof of being immunized is being offered digitally.

“After that, how this proof of vaccination will be used, this is the question that we’ve asked public health,” he said.

Play it safe for Mother’s Day

Officials also took the opportunity to caution Quebecers about having celebrations this upcoming weekend.

“It’s going to be Mother’s Day, and we want your mothers to be in safe conditions,” Arruda said.

Even as vaccination ramps up, public health measures remain in effect, he added. People should still wear masks, stay two metres apart and wash their hands if they see one another.

“I know it’s difficult,” Arruda said. “But don’t take risks with your mother.”

Arruda went on to say that remaining on guard against the novel coronavirus and abiding by restrictions is the “best thing” that people can do to protect their mothers.

READ MORE: ‘We must vaccinate as many Quebecers as possible’: province turns to ads, mobile sites

— With files from The Canadian Press