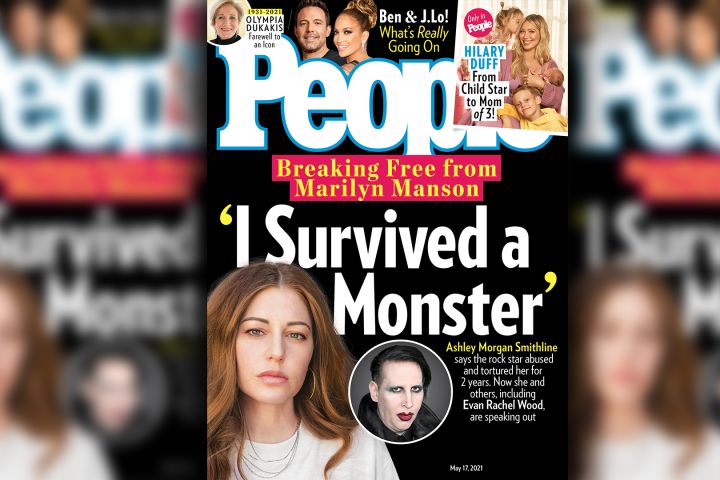 Ashley Morgan Smithline is opening up about the alleged physical and emotional abuse she suffered at the hands of Marilyn Manson.

Smithline, 36, details her alleged experiences with Manson in a new interview with People, her first since naming Manson as her abuser in February.

“I survived a monster,” Smithline asserts.

She accuses Manson of biting her, whipping her, cutting her with a swastika-emblazoned knife and shoving his fist in her mouth during sex. The “Beautiful People” rocker is also accused of forcing Smithline to engage in a blood pact.

“He cut me on my stomach and then drank my blood. Then, he had me drink his,” she said. “The more I let him hurt me, the more I loved him and the more I was proving myself to him.”

Smithline details how Manson locked her in “the bad girls’ room,” a glass, soundproof room, whenever she “p**sed him off.”

“If I had to pee while he was replaying one of his songs I’d heard 30,000 times, I’d have to be locked in the box,” Smithline alleged. “I was malnourished and cold.”

The accuser shares what drew her to Manson. Smithline said the Grammy nominee “lured me in with this endless intelligence.”

“He seemed brilliant and I still think he is,” she says. “We talked about Nabokov and Tolstoy and foreign films and not in a pretentious ‘first year of film school’ way. In a way of really appreciating art and literature.”

Smithline is one of 15 women, including actresses Evan Rachel Wood and Esmé Bianco, to accuse Manson of sexual, psychological, and physical abuse.

Smithline detailed the alleged physical abuse she experienced at rape.

“The physical abuse became sexual,” a passage for the original story reads. “The first time she says he raped her, she woke up in the morning screaming, realizing her arms were tied. Manson had been penetrating her while she slept.”

“He kept telling me, ‘You can’t rape someone that you’re in love with,’” Smithline recalled.

A spokesperson for Manson said they “strongly deny her claims” in a statement to the publication.

“There are so many falsehoods within her claims that we wouldn’t know where to begin to answer them,” the spokesperson added. “This relationship, to the limited extent it was a relationship, didn’t last one week.”

Smithline provided People with emails and messages allegedly sent from Manson over a span of two-plus years. Manson is currently being investigated for domestic violence by the Los Angeles Sheriff’s Department.

“I’m not a victim,” she told the out. “I’m a f**king survivor. I want people to know who he is, and it’s worth it if not one more woman gets hurt again.”

“I stand with you @ashleylindsaymorgan,” she wrote.