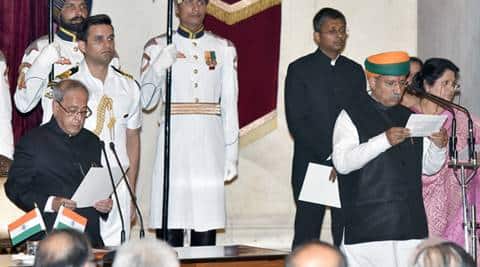 The President, Shri Pranab Mukherjee administering the oath as Minister of State to Shri Arjun Ram Meghwal, at a Swearing-in Ceremony, at Rashtrapati Bhavan, in New Delhi on July 05, 2016. (Source: PIB)

A bureaucrat-turned-politician, Arjun Ram Meghwal, the chief whip of BJP in Lok Sabha, is known for his penchant for pedalling to Parliament.

Meghwal was born into family of weavers in Kishmidesar village of Bikaner district. He began his career as a telephone operator while pursuing his LLB and got into the
Rajasthan Civil Services after two failed attempts.

He was later promoted to the Indian Administrative Service (IAS).

A two-time MP, the 61-year-old was first elected to the Lok Sabha in 2009 from Bikaner constituency which was earlier represented by Bollywood star Dharmendra.

Known for his active participation in Lok Sabha debates on a variety of issues, Meghwal had recently attacked the judiciary for its “extra constitutional” activism. The dalit leader had demanded that “running commentary” by judges should end.

Easily identified by his green and saffron turban, Meghwal has of late started using a bicycle to commute to Parliament during sessions. This, he says, saves fuel, protects environment and keeps him fit. He often sings bhajans in the morning which he says keep him mentally alert.

As an MP, he has been a member of various parliamentary Committees including on defence, science and technology, environment and forest, personnel, public grievances and law and justice.

Meghwal has participated in many programmes for development of Rajasthani language and its inclusion in 8th Schedule of the Constitution.