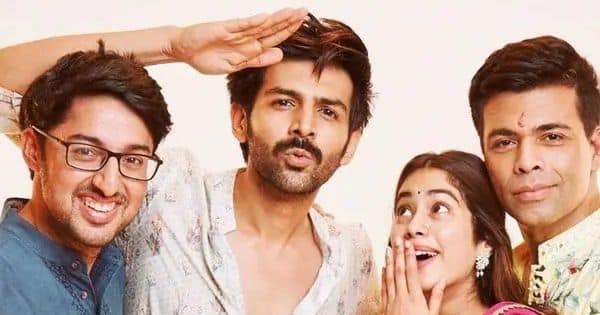 Last month, Karan Johar‘s banner Dharma Productions officially announced that Kartik Aaryan would no longer star in their upcoming production Dostana 2. While it was being said that Kartik’s unprofessional behaviour prompted Karan to remove him from the film, both Kartik and Karan refrained from commenting on the matter. Netizens had started slamming the production house alleging nepotism. But it seems like the real reason behind Kartik’s ouster from Dostana 2 has come to the fore. Also Read – From arm-twisting to salary hike: 5 possible reasons that led to Kartik Aaryan and Karan Johar’s fallout

If a report in TOI is to be believed, Kartik had an ugly fallout with his co-star Janhvi Kapoor and their friendship reportedly ended in January. This incident apparently made Kartik quite uncomfortable on the sets. He reportedly avoided shooting for Dostana 2 citing the pandemic and eventually the shoot got delayed. Also Read – Dostana 2: Has Akshay Kumar stepped in for Kartik Aaryan in the Karan Johar film?

The report further says that Kartik was deeply affected by his sudden rift with Janhvi that prompted him to walk up to his director Collin D’Cunha to tell him to scrap the film. Janhvi and Kartik were reportedly not on talking terms during this time. He reportedly asked the makers to drop Janhvi from the film and in exchange, was ready to adjust his fees for Dostana 2.

This forced Karan to make a tough call to drop Kartik and find his replacement. Kartik had already shot 60 per cent of the film and replacing him would mean an increase in the film’s budget. But Karan was apparently ready to shell out money from his pockets and do the reshoots with a new acctor. Several names such as Akshay Kumar, Sidharth Malhotra, Varun Dhawan, Rajkummar Rao and Siddhant Chaturvedi have come forward as Kartik’s replacement.

While an official statement from both Karan Johar and Kartik Aaryan is awaited, it remains to be seen if this reason turn out to be true.