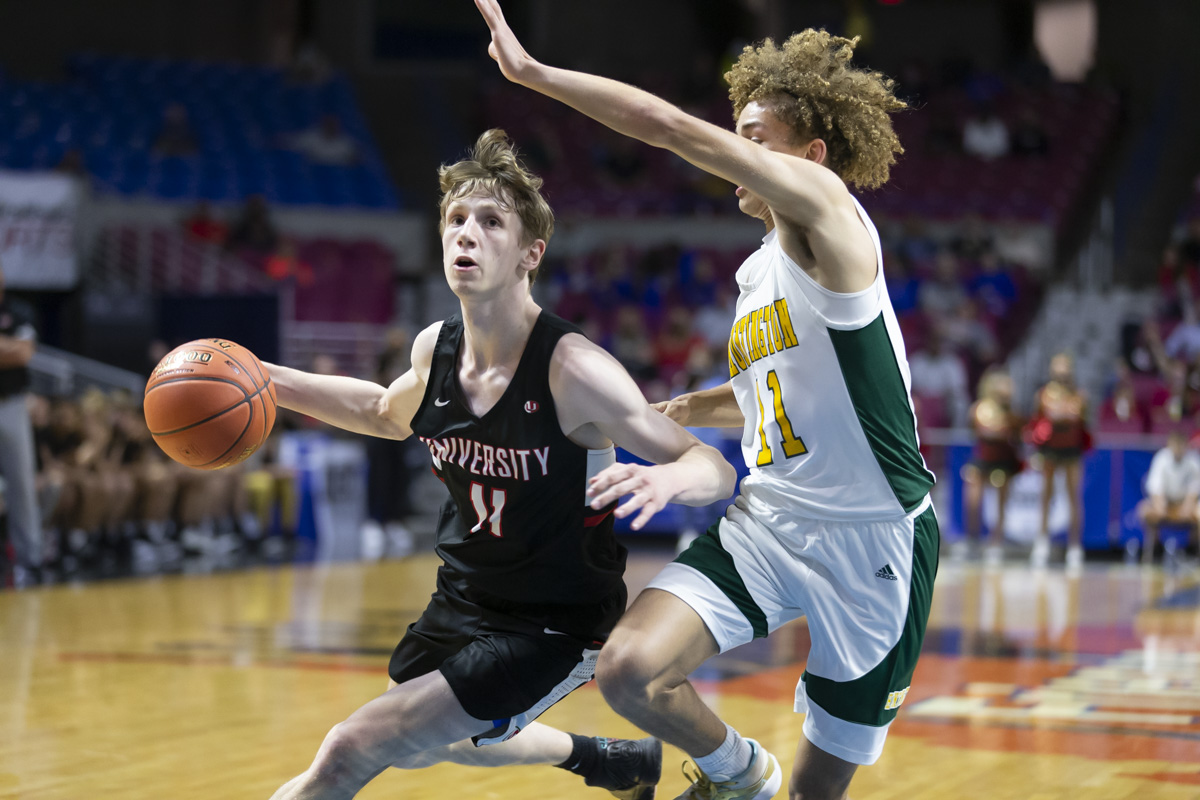 CHARLESTON, W.Va. – No. 5 University looked as if they would easily cruise over fourth-ranked Huntington in the 4A quarterfinals, but a late rally by the Highlanders saw them close a 10-point gap to overtake and defeat the Hawks, 66-63.

“They outplayed us down the stretch,” UHS Joe Schmidle said. “They executed really well.”

University opened up strong, taking an 18-9 lead after the first frame behind a strong performance by Ryan Niceler, Garrison Kisner and Tracy “T.T.” Brooks. Blake Barkley, who has been dealing with injury lately, took to the pine for UHS and helped the Hawks push their lead even further shortly into the second quarter at 25-15. Huntington battled back to cut the lead within four points, but UHS regained momentum and entered the locker room up seven, 32-25.

The Hawks continued to roll in the third quarter, pushing the lead back to 10, holding that at the end of the stanza at 47-37. Then, HHS unleashed the storm. The Highlanders methodically chipped away at the Hawks’ lead, bringing it within two, two minutes into the quarter. University regained some ground, pushing the lead to eight, but HHS strung together an 8-0 run to tie things up and then a 6-2 run to take a four-point lead. The Highlanders managed to hold UHS to two points for one minute and held their small lead until only seconds remained. Despite pulling it within three, UHS was unable to complete a comeback of their own and the reigning state champions fell.

Huntington coach Ty Holmes credits his guys’ resiliency and pressure in the second half for the win.

“We told them going in that’s a little harder. you don’t see a court like this all year. Usually, there’s a wall behind the basket. We had to attack the glass, follow our shots and be more aggressive. In the second half, we did that. The games we watched, they shot the ball pretty decent. Our pressure really affected them in the second half.”

The pressure was intense enough to knock Barkley out of the game with five fouls. Without the starter, who had shot 100% up to that point, the Highlanders took advantage.

“We weren’t where it needed to be,” he said. “Weren’t clearing out when we needed to; mental mistakes for a young team. We finished really well; a very physical game. We didn’t have a lot of people in the game that we normally do because of foul trouble and that kind of threw everything off. When Blake got in foul trouble and fouled out, we’re not as good.”

Brenden Hoffman led the Highlanders with 25 points off the bench, while Amare Smith picked up a double-double in the win with 18 points and 10 rebounds. Smith also led the team with five steals.

Holmes had a lot of good to say about his sixth man, too.

“He brought a lot of energy and scoring and made a lot of free throws,” he said. “That’s what we need from him when he comes in. He hit some big shots and a big-time 3-pointer. That 3 is really what gave us the edge and momentum.”

Niceler, Brooks and Barkley paced the Hawks in the loss with 19, 16 and 13 points, respectively. Brooks and Kisner led the team in boards (6), while Barkley led in steals (3).

Up next, Huntington will face No. 1 Morgantown Friday at 5:30 p.m. in the semifinals match. The Mohigans defeated No. 8 Woodrow Wilson earlier Thursday afternoon.

“Morgantown? They’re similar to us. play hard, quick guards, bigs can shoot,” Holmes said. “We have to play solid defense. No magical thing you should do, just play solid and play our game the way we have been all year.”

The loss ends University’s season. The Hawks say goodbye to two seniors, Niceler and Brooks, who have been pivotal throughout UHS’s COVID-laden rebuilding year.

“They’ve been great leaders this year,” Schmidle said. “That wasn’t an easy job taking over for what we had lost and facing adversity of two different quarantine periods. We lost a lot of practice time and these guys came to work every day, worked their tail off hard and they made their teammates do the same.”

“The main goal was to get to states, but it’s a big accomplishment that we could make it here with what we faced throughout the year,” Niceler said. “I knew we could do it, but it wasn’t our night.”