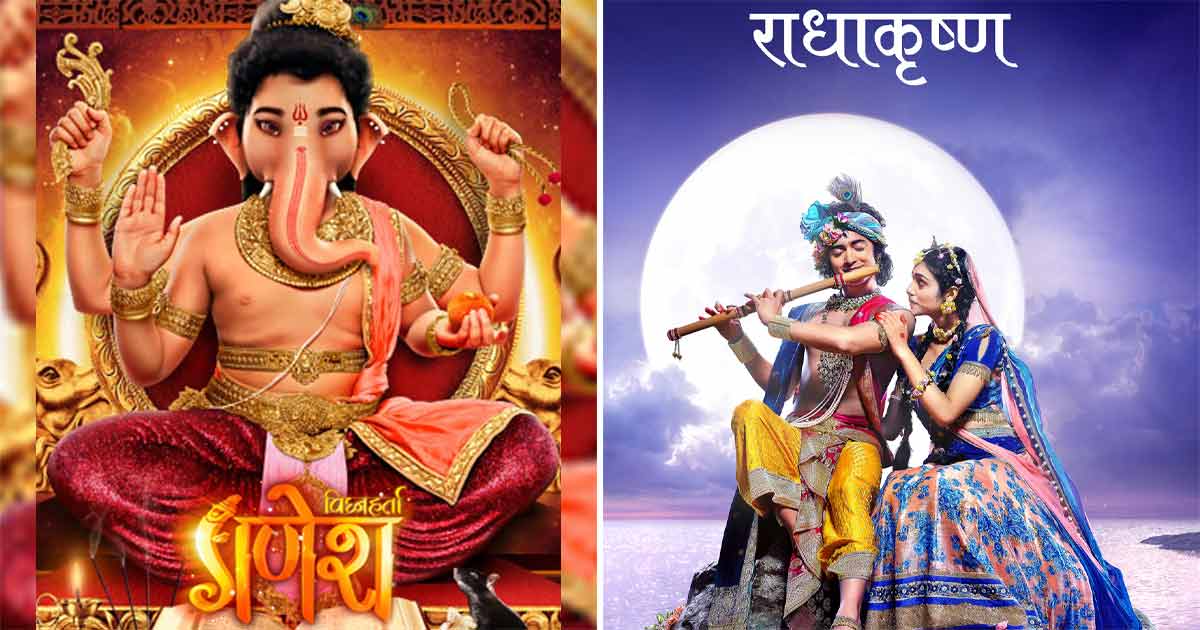 Last year during Covid lockdown, Doordarshan struck gold re-telecasting “Ramayan”, Ramanand Sagar’s hit mythological series of the eighties. This year, as India has come to a standstill once again owing to the second wave of the deadly coronavirus, many soap makers seem to have picked up cue. Mythology seems to be flavour on the tube once again, as Indian television finds a ready homebound audience base.

A host of shows including “Vighnaharta Ganesh” and “RadhaKrishn” make for prime family viewing while the epics “Ramayan” and “Mahabharat” are being re-run on a private channel.

Shooting for mythological shows in the time of Covid is naturally tough, given the grandeur of set, costumes, heavy jewellery and the execution they demand. Also, no matter the precautions, actors would always have to take off their masks in front of the camera.

“Shooting in Covid times is tough because there are so many precautions. Actors are at high risk because while shooting we cannot wear a mask. If the team is good and precautions are being taken, actors are safe. You need to sanitise your hands and take precautions and see if people are wearing masks around you and sanitising their hands,” says Riney Aryaa, who plays Goddess Laxmi in “Vighnaharta Ganesh”.

She adds: “A lot of people touch actors for costume, hair and make-up. The costumes are so heavy and the temperatures are high and that makes it very difficult. We are in our jewellery and get-up for 16 hours.”

In times of despair as the lockdown, portraying a mythological character also entails a very different challenge. Shows in this genre are meant to spread hope during a crisis as the pandemic, as people look up to divine protagonists on the small screen with reverence. In turn, this means there is the need to be careful about portraying a character with authenticity more than ever, as these are characters people have immense faith in and are sensitive about.

This is something actress Madirakshi Mundle observes. She plays Devi Parvati in “Vighnaharta Ganesh”.

“I feel fortunate to have essayed Goddesses on the TV screen. Sita, Lakshmi and Parvati are all Goddesses in our epics whose stories of virtue, ennobling qualities, benevolence and deep intrinsic strength we have grown up with and have a deep reverence for. They are often very commonly invoked as role models. People are attached to them and they are deeply integral to our culture and mythology. So, the audience’s feelings towards them are of paramount importance when I essay such a role. People have a certain image they attach with such a character, in their minds,” says Madirakshi.

For Tarun Khanna, who plays Hanuman in “Radhakrishn”, the challenge about mythological portrayals is more universal. “Mythological shows are tough physically and a person has to be very good at Hindi,” he says.

Here are some of the mythological shows that are currently a rage on the tube:

The popularity of late Ramanand Sagar’s tele-epic continues to grow with time. While the show broke several records upon re-release on Doordarshan during last year’s lockdown, it has been brought back on Star Bharat this year. The show stars Arun Govil as Ram, Deepika Chikhalia as Sita, Sunil Lahri as Lakshman, Arvind Trivedi as Raavan and Dara Singh as Hanuman.

The story of the show revolves around the life story of Sai Baba of Shirdi and talks of how he helps multiple people who seek him. His path of Dharma is highlighted in the series. The show stars Tushar Dalvi, Kishori Godbole and Vaibhav Mangle.

The show is a sequel to the series “Santoshi Maa” and has been produced by Rashmi Sharma and Pawan Kumar Marut. Actress Gracy Singh plays the lead in the show. Actors Tanvi Dogra and Vijay Badlani are also part of the show.

The series revolves around the eternal bond of love shared by Radha and Lord Krishna. The show stars Sumedh Mudgalkar and Mallika Singh and has been directed by Rahul Kumar Tiwari.

Must Read: Sheeba Chadha On Her Deleted Scene From Gully Boy: “Next Time When I Meet Zoya, I’m Going To Have A Little Chat…”