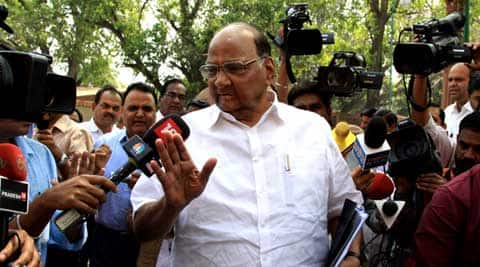 “Why has Pawar failed to see Fadnavis’ great social engineering. The decision to nominate Chhatrapati, who represents the royal Maratha clan, along with Dr Vikas Mahatme, representing the ‘dhangar’ shepherd community, to the Rajya Sabha shows our effort to accommodate all castes and classes,” argued several BJP leaders and Cabinet ministers.

Almost 24 hours after Pawar’s remarks at a function in Kolhapur, BJP leaders, cutting across caste and class, wondered what made Pawar to rake up caste and class to attack Fadnavis.

Senior BJP leader Madhu Chavan said, “Whenever the NCP loses political ground, Pawar rakes up the caste factor to divide people. His decision to ridicule Fadnavis for nominating Chhatrapati has exposed his caste bias. In 1993-94, he used to ridicule the BJP saying ‘it is a Joshi-Mahajan government’. In 1995, the Shiv Sena and the BJP voted the then ruling Congress out of power and Manohar Joshi became the chief minister.”

The Shetkari Sangathana too objected to Pawar’s remarks. “The NCP president had raked up the caste factor, riling our leader Raju Shetty, who belongs to the Jain community, when he had given a tough fight to the NCP in the Lok Sabha elections,” it said.

At a book release function in Kolhapur, Pawar chided the BJP for nominating Chhatrapati as Rajya Sabha member. Referring to history, Pawar said, “In the past, Chhatrapati (the royal title used by the ruling Maratha king) used to appoint Peshwas equivalent to the prime minister in the Maratha empire. In turn, Peshwas would appoint Fadnavis (a ministerial post in the Peshwa period). However, the nomination of Sambhaji Chhatrapati has been done by Peshwa-Fadnanvis.”

In a sharp retort, Fadnavis said, “Chhatrapati’s nomination was done by the President of India and the Prime Minister. I am only a ‘sevak’ (true servant of the people). And the decision to honour Chhatrapati was to express our reverence to the social reforms that continues in the royal family.”

“Honouring Chhatrapati is also to signal that we want to continue the legacy of reforms started by the royal family.”

A senior NCP functionary, however, told The Indian Express, “Pawar’s remark was just a historical fact. It was not with any motive to trigger a caste debate or undermine anybody. Pawar believes in inclusive politics.”

A senior Congress leader took a dig at Pawar, “It is the Nehru-Gandhi family which could rise above caste-class politics. The NCP has always pursued Maratha politics. This was evident in their cabinet and party composition. The NCP always took pride in the tag of great Maratha leader bestowed on Pawar.”