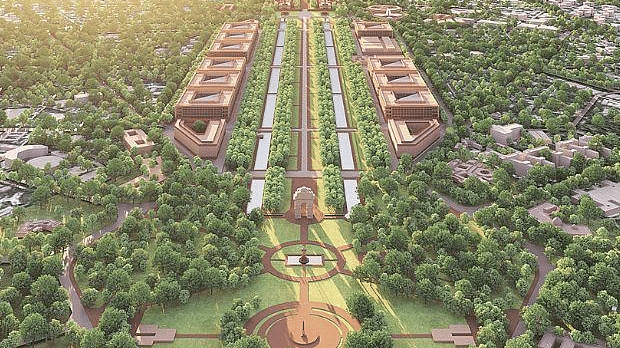 
New Delhi: A request was made to the Delhi High Court on Monday to give an early hearing to a PIL seeking a stay on the construction of the Central Vista here amid the raging COVID pandemic.

The request was mentioned before a bench of Chief Justice D N Patel and Justice Jasmeet Singh by senior advocate Sidharth Luthra, and the court said an early hearing application be filed first.

Luthra told the bench that he was mentioning the matter as the Supreme Court on May 7 asked the petitioners to seek urgent hearing before the high court on May 10.

Petitioners — Anya Malhotra, who works as a translator, and Sohail Hashmi, a historian and documentary filmmaker — had moved the apex court against the high court’s May 4 order adjourning their plea to May 17.

The high court had adjourned the matter saying it first wants to study the apex court’s January 5 judgement giving a go ahead to the Central Vista project.

In the appeal before the Supreme Court, the petitioners had contended that the project was not an essential activity and therefore, it can be put on hold for now during the pandemic.

In the hearing before the apex court, Luthra had said that the plea was only opposed to the permission granted for continuing the construction going on at Rajpath, Central Vista stretch and gardens.

Labours are being transported from Sarai Kale Khan and Karol Bagh area to Rajpath and Central Vista, where construction work is going on. This enhances chances of spread of COVID infection among them, Luthra had told the apex court.

On Monday, he made the same argument before the high court while seeking an early hearing of the matter.

The application for early hearing is likely to be heard by the high court on Tuesday, May 11.

Luthra had told the apex court that when the nation was considering lockdown and even the Indian Premier League is being shut, the construction activity cannot be allowed.

The plea before the high court has contended that the project has the potential to be a super spreader if allowed to continue during the pandemic.

It has also contended that the continuation of the project was a matter of concern in view of the “crumbling” healthcare system and the lives at stake of the workers employed at the construction site.

The project entails construction activity on Rajpath and the surrounding lawns from India Gate to Rashtrapati Bhawan, the plea, filed through advocates Gautam Khazanchi and Pradyuman Kaistha, has said.

The project envisages constructing a new Parliament House, a new residential complex that will house the Prime Minister and the Vice-President, as well as several new office buildings and a Central Secretariat to accommodate Ministry offices.

Also Read: Central Vista project was always needless, now it has no moral ground either