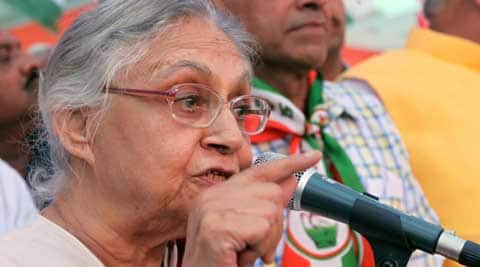 Sheila Dikshit rejected the party’s advances towards making her the Congress face for the polls: report. (Source: Express Archive)

NDTV on Monday reported that Dikshit has rejected the party’s advances towards making her the CM face for the polls.

On June 16, Dikshit met Congress President Sonia Gandhi and vice president Rahul in Delhi triggering speculation among party circles that she might be named as the chief ministerial candidate ahead of the UP polls.

Earlier, poll strategist Prashant Kishor, who was roped in by the Congress to guide the party ahead of assembly polls in Punjab and UP, proposed fielding Priyanka Vadra and Rahul Gandhi’s as the party’s CM face; but the idea was soon dropped.

Dikshit is currently embroiled in a water tanker ‘scam’ with the Aam Aadmi Party accusing her of impropriety. The case was handed to the Delhi Anti-Corruption Bureau, who registered an FIR and said she could be called in for questioning.