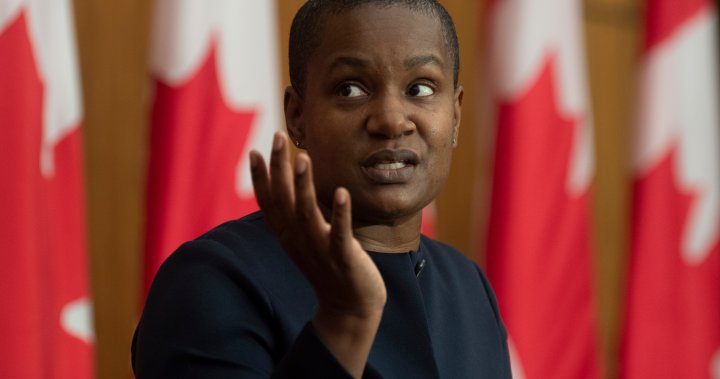 Green Party Leader Annamie Paul is considering her next steps, Global News has learned, after her party’s governing federal council threatened her Tuesday night with a non-confidence vote if she failed to repudiate a former advisor in her office who many party members — and the two remaining Green MPs — hold responsible for the defection of MP Jenica Atwin from the Greens to the Liberals.

In a narrow 5-4 vote, with one abstention, that came at the end of a three-hour meeting that concluded at about 11 p.m. ET on Tuesday, the federal council directed Paul and Nanaimo MP Paul Manly “to organize a joint statement and a press conference where Annamie Paul would repudiate Noah Zatzman’s attacks and explicitly support the GPC caucus.”

Zatzman is the advisor in Paul’s office who, through a social media post, threatened to work to defeat Atwin in the next general election after Atwin, also on social media, sharply criticized one of Paul’s statements on the recent Israel-Hamas conflict.

Paul’s position on that conflict was similar to the position of the governing Liberals in calling out both sides for excessive violence and appealing for a ceasefire.

Atwin, in her post, said Paul’s position was “totally inadequate” and suggested that Israel was an apartheid state, a characterization that drew immediate criticism from many parliamentarians and Jewish groups. Paul, who is Jewish herself, did not respond publicly to Atwin’s criticism though, sources say Atwin privately apologized to Paul for that social media Post.

Then, after joining the Liberal caucus, Atwin issued a statement apologizing for her remarks.

Nonetheless, several Green Party sources have told Global News that, regardless of the issue at hand, Paul should have publicly censured Zatzman for threatening to defeat a sitting MP, something which she has not done.

Paul, elected leader last summer to succeed Elizabeth May, is a member of the federal council, though she was not permitted to cast a vote Tuesday night.

Under the party’s constitution, a non-confidence vote in the leader must pass by a three-quarters majority at federal council. If such a motion clears that hurdle, it would have to be ratified by the party’s membership at a general meeting. Only then would a leader be relieved of the job.

Zatzman, for his part, will end his employment with Paul’s office at month’s end when his contract expires. The party’s federal council had on June 4, before Atwin defected, issued a written notice to Zatzman telling him to essentially “down tools” and not do any work for Paul or the party until his contract expired.

In the meantime, the 18-position council is itself is about to be radically re-shuffled. The party is in the midst of elections for 13 federal council positions as the terms for those council positions expire. There were three vacancies on the council before Tuesday’s meeting started and now appears to be five.

One federal council member, Lia Renaud quit her position as Nova Scotia’s representative on the council, after Tuesday’s meeting. Renaud told The Canadian Press she “could not in good conscience continue” her support for Paul, but that she is still backing May and Manly. Global News has not been able to confirm the identity of the other council member that resigned in the wake of Tuesday’s meeting but that individual is also believed to no longer support Paul’s leadership.

All of that has Paul’s supporters noting that the process to unseat Paul is being taken now by what is essentially a lame-duck council in its final weeks before the council elections that will take place Aug. 19. Under the current federal council configuration, 11 members would have to vote to remove Paul in a non-confidence to clear the three-quarter majority that is required for such a move. That means, that in addition the five who voted in favour of Tuesday night’s motion would need to find an additional six votes. Conversely, if the four who voted against Tuesday night’s motion stick with Paul, that would be enough to defeat a non-confidence vote at the July 20 vote.

Similarly, neither of the party’s two sitting MPs — Manly and May —  returned multiple phone or e-mail messages Tuesday.

Party spokesperson Rosie Emery said the party expects to release a statement about the matter sometime on Wednesday.