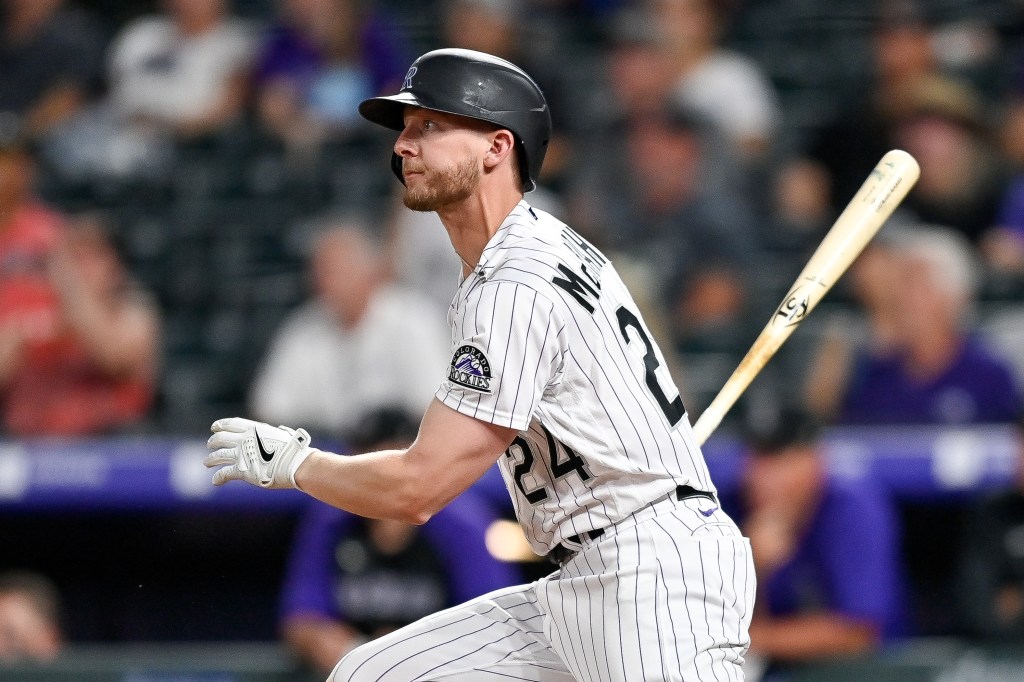 He proved it again Tuesday night in the Rockies’ 8-4 come-from-behind win over San Diego at Coors Field. McMahon hit 3-for-3 and drove in four runs.

McMahon, who started at third base, stepped up to the plate in the seventh inning with the bases loaded, needing a double to complete the 10th cycle in Rockies history.

McMahon hit a laser to left-center field, and for an instant, it looked as if the cycle was his. Until San Diego center fielder Trent Grisham made a running catch. Nevertheless, McMahon, whose 42.4% hard-contact rate is the third-highest in the National League, drove in Raimel Tapia to extend Colorado’s lead to 6-4.

“At first I was really excited (to drive in Tapia), but I’d be lying if I didn’t say I was in the dugout saying, ‘Man, 5 more feet left and I’ve probably got a double,’ ” McMahon said.

Added Black: “Hey listen, that might have been the hardest ball he hit all night. That was a bullet.”

The Rockies piled on in the eighth, getting two-out RBI doubles from Tapia and Yonathan Daza. Tapia went 2-for-5 and drove in two runs, extending his hitting streak to 12 games, tying his career-high.

The Rockies may be roadkill away from Coors, where they are 5-27, but they’ve become a buzzsaw at Coors Field. By taking the first two games of the series from the Padres, they improved to 22-14 at home.

“This was a good win tonight,” Black said. “The coaches, when we were shaking hands after the game, there were a number of guys who said, in passing, ‘That was a good one.’

“We all knew we were down 4-0 to a good team, with a guy who’s probably headed to the All-Star Game, in Yu Darvish. He’s a really good pitcher. But we drove his pitch count up a little bit and then put together some really good at-bats against the best bullpen in the National League.”

McMahon led off the second inning with a single off Darvish, tripled off Darvish to score Trevor Story in the fourth, and hit a two-run homer off Darvish in the sixth, again driving in Story. McMahon’s home run was his 16th of the season and he now has a team-high 43 RBIs.

Overshadowed by McMahon’s big night was the performance of starter Chi Chi Gonzalez.

The right-hander was tagged for three home runs at Miami in his last start, and on another hot night at Coors Field — a first-pitch temperature of 98 degrees — it looked like he might be in for another rough outing.

It sure looked that way in the first inning when Manny Machado crushed a two-out, first-inning double and Fernando Tatis Jr. followed up with a two-run, 431-foot homer to right-center. It was Tatis’ 20th home run of the season.

San Diego extended its lead to 4-0 lead in the second, stringing together three hits, including an RBI single by Darvish.

But after that, Gonzalez took care of business, blanking the Padres for the next four innings. Over six innings, the right-hander gave up four runs on six hits, walked one and fanned one. He coaxed the Padres into 11 groundball outs and at one point he retired 10 batters in row.

“I really focused on hitting that black (on the plate),” Gonzalez said. “They have an aggressive team and they came out aggressive against me. That’s what I have to figure out is to execute from pitch one.”

The Rockies will attempt to finish a sweep of the Padres on Wednesday afternoon at Coors. The Padres, picked as a preseason powerhouse, have won just four of their last 16 games since May 30.