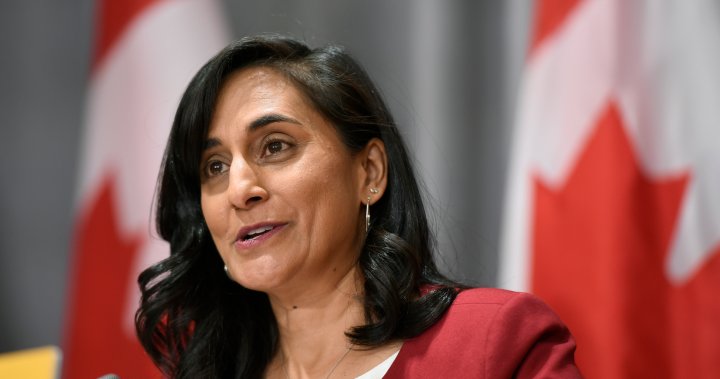 Canada is set to receive an extra one million doses of the Moderna COVID-19 vaccine from the United States on Thursday night, says Procurement Minister Anita Anand.

In a series of tweets on Thursday morning, Anand announced the boost to vaccine supplies from Canada’s southern neighbour and thanked U.S. President Joe Biden as well as her American counterpart, Jeffrey Zients, and Canada’s ambassador to the U.S. Kristen Hillman for their work on the agreement.

A White House official told Global News the shipment is part of the 80 million vaccines the U.S. pledged to share with the world by the end of June. A Canadian official confirmed the doses are a donation.

That official said they did not have the specific expiration dates for the vaccines on hand at the moment but that expiration is not imminent and that is not expected to be an issue in the rollout of those doses.

I would like to thank President Biden and my counterpart Jeffrey Zients for their partnership. A special thanks to Ambassador Hillman for supporting Canadians’ access to COVID-19 vaccines via the U.S. 2/3

Last week, Anand said Moderna had confirmed it would be shipping 7 million doses of its mRNA COVID-19 vaccine to Canada in June in an estimated two or three shipments.

The shipments mark a massive infusion of shots from Moderna, which has at times appeared to struggle to provide clarity on delivery dates and timelines for its shipments to Canada.

The pharmaceutical giant’s vaccine works the same way as the vaccine from Moderna, and both are deemed highly effective by Health Canada in preventing the spread and severe outcomes of COVID-19.

The first shipment from Moderna this week included 2.9 million doses while the second will contain 4.2 million doses and arrive later in the week, with delivery to provinces and territories next week.

Another 2.4 million doses of Pfizer’s vaccine are set to arrive this week as well.

As of June 16, Canada has given out 30.3 million doses of COVID-19 vaccines, according to most recent update on the government’s vaccine tracker.

Date last updated on June 11 on that same tracker states 70 per cent of Canadians over the age of 12 have now received at least one dose of a vaccine, which is 61 per cent of the total population.

Just over nine per cent over the age of 12 are fully vaccinated with both doses of a vaccine, which represents eight per cent of the total population.

With files from Global’s Reggie Cecchini.