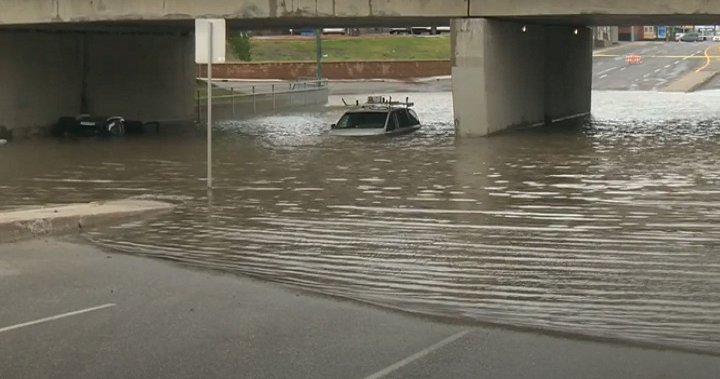 The City of Regina says about 50 to 70 millimetres of rain fell between 7 and 9 a.m. Friday, which caused flooding in parts of the city, most notably at the Albert and Broad Street underpass.

Some residents also dealt with flooded basements, including in Regina’s North Central neighbourhood, which was hit the hardest.

“We started seeing service requests Friday afternoon and have continued to see them, so we’re following up,” said Kim Onrait, the City of Regina’s citizen services executive director.

“We’ll follow up on each one of those. Our crews are working with the residents to help them through this.”

As of Monday, Saskatchewan Government Insurance (SGI) reported 451 property claims and 78 vehicle claims resulting from flooding due to the heavy rain Friday.

The city does have a long-term plan in place to address storm flooding with infrastructure improvements being made in North Central at a cost of $15 million over the next three years.

The improvements will impact about 450 homes.

More than $200 million has been and is being spent by the city on the McCarthy Boulevard pumping station, along with its wastewater treatment plant.

“We take rain events like the one on June 11 very seriously. That’s one of the reasons … we are significantly investing in our wastewater, stormwater systems,” said Kurtis Doney, the City of Regina’s director of water, waste and environment.

“As a last resort and in order to reduce sewer back up into residents home and ensure the protection of city assets, the Harbour Landing lift station and the Garnett Street lift station discharged diluted wastewater in the storm channel and Wascana Creek.”

Because of this, Doney said the impact on the environment is expected to be minimal.