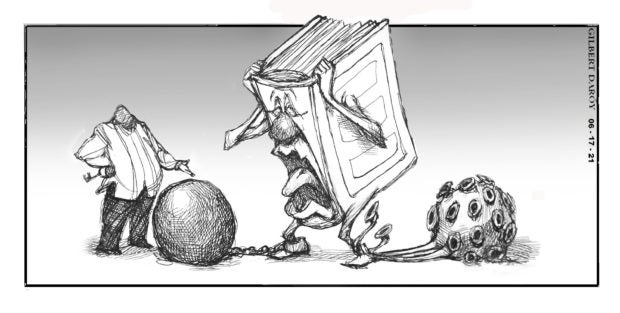 The sudden shift to online learning due to COVID-19 quarantine restrictions has already put the country’s private schools on the ropes. But the sector fears that far too many of them will be knocked out completely if the new tax regulation that will more than double their income tax will be enforced.

The Bureau of Internal Revenue (BIR) issued on April 8 Revenue Regulation No. 5-2021, providing for an increase in the income tax rate of for-profit educational institutions to 25 percent from 10 percent. The schools have described the measure as “devastating,” an additional financial burden they could ill afford at this time when they are already in dire straits due to unprecedented pandemic restrictions.

The BIR issued the regulation following the passage of the Corporate Recovery and Tax Incentives for Enterprises (CREATE) Act, which in fact called for the temporary reduction in the corporate tax rate for “proprietary educational institutions” to 1 percent from 10 percent originally, for three years from July 2020 to July 2023, precisely because legislators wanted to give these vital institutions much-needed relief amid the still-raging COVID-19 pandemic.

According to the 2,500-member Coordinating Council of Private Educational Associations (Cocopea), the problem stemmed from the BIR’s insertion of the term “nonprofit schools” in the definition of proprietary educational institutions, which then limits the scope of the lower tax to nonprofit schools, and subjects for-profit educational institutions run by stock corporations to the regular corporate tax rate of 25 percent.

That interpretation will cause “irreparable damage” to their ranks, said Cocopea. The BIR, meanwhile, in denying the group’s plea for reconsideration, insisted that the Tax Code granted the preferential tax treatment only to nonprofit educational institutions.

“The imposition of RR 5-2021, especially during this deep economic recession, will penalize, marginalize and discriminate against proprietary educational institutions with unfeasibly higher taxes that may force financially distressed schools to close down and trigger a radiating wave of economic disruption that will hit not just teachers and school personnel, but also the extensive network of linked small and medium businesses and livelihood activities of the host communities,” said Cocopea managing director Joseph Noel M. Estrada. The BIR’s “arbitrary move… is ill-conceived and insensitive to the realities of the education sector.”

Cocopea cited in a paper that since the start of the pandemic in 2020, almost 900 private basic education schools have closed, and several private higher education institutions have suspended operations. The Department of Education likewise reported on March 1 that enrollment in private K-12 schools had dropped by over 900,000 versus the prior year.

In higher education, a survey conducted by the Philippine Association of Colleges and Universities in April 2021 indicates that over 50 percent of respondents experienced a decline in enrollment by 10-50 percent in school year 2020-2021 versus the prior year.

Over a million students, faculty, and school personnel in private schools have been impacted by the pandemic. Thus, as Cagayan de Oro Rep. Rufus Rodriguez warned, if the BIR rate will stand, more schools will be forced to close down or raise their tuition to levels unaffordable for most students.

Added Senate Minority Leader Franklin Drilon: RR 5-2021 “could potentially be the ‘last nail in the coffin’ for some of these private schools which barely survived the effects of the pandemic.”

Legislators are heeding the urgent warnings, with the House ways and means committee last Monday approving a substitute bill to amend the National Internal Revenue Code and address ambiguities so that for-profit educational institutions will continue enjoy the 10-percent preferential income tax rate—a rate they have been enjoying since 1968—plus the relief granted under CREATE.

However, these proposals will still have to go through the legislative process starting July when Congress resumes session. In the meantime, Senate President Pro Tempore Ralph Recto said “nothing prevents the BIR from rectifying its oversight,” by withdrawing the “erroneous order” based on “wrongful interpretation” following the legislators’ original intent.