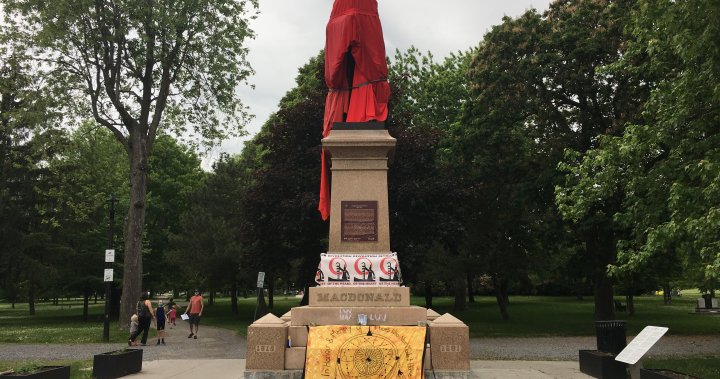 At an emergency meeting held Wednesday night, Kingston council decided to move the statue of Sir John A. Macdonald to his gravesite, pending Indigenous consultation.

It was a lengthy special meeting, centred around the discussion of what to do with the statue currently standing in Kingston’s city park.

Macdonald’s legacy has been under scrutiny over the past number of years and even more so in the past few weeks in the wake of the discovery of the remains of 215 children at unmarked gravesites at the site of a former residential school in Kamloops, B.C.

Earlier this week, a city working group met to discuss the fate of the City Park statue after renewed calls to remove it from its downtown location. The group voted unanimously to recommend the statue’s removal to council.

About a dozen delegations presented their thoughts and opinions both for and against removing it.

In the end, councillors voted on option three, 8 to 5. Council will consult with local Indigenous communities before moving the statue to the cemetery.

The statue will be removed from City Park and placed in storage until a plan to relocate it to the cemetery is solidified.