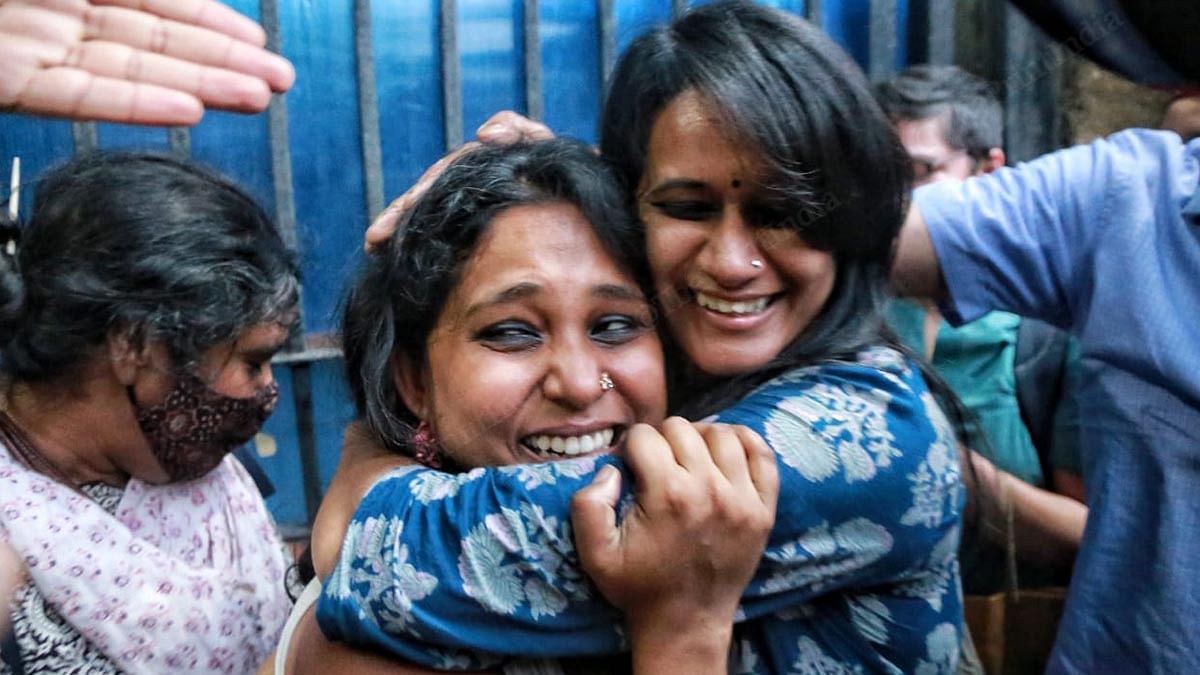 
New Delhi: With the slogans ‘Lal Salaam’ and ‘Inquilaab Zindabad’ echoing in the air, student activists Devangana Kalita, Natasha Narwal and Asif Iqbal Tanha walked out of Tihar Jail Thursday, over a year after they were arrested under the stringent Unlawful Activities Prevention Act (UAPA).

Accused in the Northeast Delhi riots case, the three were released 48 hours after the Delhi High Court granted them bail, and after a Delhi court ordered their immediate release early Thursday.

They were greeted by family, friends, students and Pinjra Tod activists — the female students’ collective that Kalita and Narwal are part of. Several of them held placards that read ‘Scrap UAPA’ and ‘Release all political prisoners’.

“I wish I was granted bail when my father needed me, I couldn’t be with him during his last moments,” said Narwal, breaking down, after she walked out of Tihar Jail’s Gate No. 3, around 7.20 pm. Kalita and Narwal walked out of prison, hand-in-hand.

Natasha’s father Mahavir Narwal had passed away due to Covid-19 last month. She was then granted a three-week bail to organise his funeral.

Meanwhile, Tanha, a student of Jamia Millia Islamia, had been granted interim custodial bail for his exams two weeks back, and stepped out of Tihar’s Gate No. 4 after completing formalities.

For Kalita, this was the first time she stepped out of prison after being arrested. “It feels unreal to see the sky outside these gates, but I am not sure till when this will last. We were framed under false charges, it can happen again, but our cause and activism will remain,” she said.

“They called me terrorist, spy, jihadi, it doesn’t bother me because I am not one of them. With this verdict, the Delhi High Court has proved that the judiciary will stand by its citizens,” said Tanha, asserting that he will continue to raise his voice against the Citizenship Amendment Act and the National Register of Citizens.

The three student activists were arrested in May last year and were accused of being “masterminds” behind the Northeast Delhi riots that happened in February 2020. As many as 53 people were killed and 200 were injured in the violence that lasted three days.

Despite the Delhi High Court granting bail Tuesday, the release of the three activists was delayed by about 48 hours.

This happened even though their counsel moved an application for their immediate release on Tuesday itself.

Additional Sessions Judge Ravinder Bedi had adjourned the application to give Delhi Police a day’s time to complete the verification process of the sureties as well as the permanent residential address of Kalita, Narwal and Tanha.

After hearing both sides, the trial judge reserved his orders on the police application, but later adjourned the pronouncement to Thursday, noting that the workload of the court was too heavy for the day.

The deferment forced defence lawyers to move the high court, where they complained against the Delhi Police’s delay tactics. A bench comprising Justices Siddhartha Mridul and Anup Bhambani, which had given the bail verdict, assembled to hold a special session Thursday.

During the hearing, the judges questioned the police for its application and remarked that the trial court was bound to implement its order promptly.

“Are we missing the wood for the trees,” it remarked, directing the trial court to assemble at noon. It fixed another hearing for 3.30 pm, indicating that it may intervene if the trial court fails to issue any order.

At 12 pm, the sessions court ordered the “immediate release” of the activists, and said the delay in the verification process couldn’t be a plausible reason for the accused to remain in prison.

Judge Bedi noted that the investigating officer should have completed the verification process of the sureties by Wednesday itself since they are local residents of Delhi.

The Delhi Police, however, was allowed to continue with its exercise to verify the permanent residential addresses of Kalita, Narwal and Tanha and submit its report by 23 June.

On the delay of their release, Kalita said: “At one point, I stopped expecting to step out, to see my family and my friends. I had this feeling that the police would come by and arrest us in some other case or the other.”

Meanwhile, Narwal’s uncle Virendar Malik, noted: “The Delhi Police hasn’t learnt its lesson yet even after the High Court’s verdict. This is not how a democracy is supposed to function. This is the unbecoming of a police force.”

Also read: I have not spent a day or night in my cell without extreme anxiety: Umar Khalid from Tihar