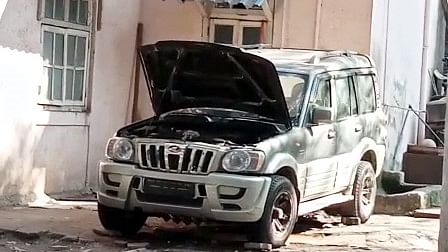 The two alleged henchmen — 40-year-old Satish Tirupati Mothkuri and 46-year-old Manish Vasant Soni — along with two others, Santosh Shelar and Anant Jadhav — abducted businessmen Mansukh Hiren, smothered to him to death and then threw his body in a creek, sources claimed.

Shelar and Jadhav were arrested on 15 June.

According to sources, it was Sharma, with over 300 encounters against his name, who arranged five men to “get rid of Mansukh” on the directions of former cop Sachin Vaze.

Hiren, 48, an auto parts dealer, was the owner of the explosives-laden Scorpio found abandoned outside Antilia on 26 February. He was found dead at Mumbra Creek, with handkerchiefs stuffed in his mouth, on 5 March.

“Satish and Manish are the two men who were hired by Pradeep along with three others, who were arrested earlier, to get rid of Mansukh as they were scared that he may open his mouth and take their names. They were present in the red Tavera car in which Mansukh was smothered to death,” a source said.

According to the source, Sharma and Vaze first tried to convince Hiren to “confess that he planted the explosive-laden Scorpio outside the house of industrialist Mukesh Ambani”. But when he refused, they planned to “eliminate him”.

The three men will be in the NIA’s custody till 28 June.

Abducted Hiren on the pretext of arranging ‘safe place’ for him

According to the source, it was on 4 March that the men told Hiren that he should leave Mumbai for a few days and that they would arrange a “safe place” for him to stay.

Hiren was allegedly told that a man named Tavde would call him and direct him on what to do. “A policeman, Vinayak Shinde, (already arrested) then called him posing as Tavde, and got him out of his house. He then handed him over to these people in the Tavera car, which had henchmen of Pradeep Sharma. They drove Mansukh around and smothered him to death. His body was then thrown in the creek,” the source claimed.

“The men even contacted Vaze and Sharma after the murder to update them,” the source added. “It was all a plan of Vaze and Sharma. These men who actually murdered Hiren were arranged by Sharma.”

The police conducted a raid at Sharma’s residence which went on for over four hours and seized a computer and a laptop along with some unlicensed arms and ammunition. For some weapons, the licences were found to be expired.

On Wednesday, the NIA also sought the permission of a special court in Mumbai to extend the custody of police inspector Mane, who was arrested on 23 April.

While being produced in the court, Sharma said that although Shelar was his informant for 12 years, he had not hired him to kill anyone.

Sharma also said that there were “two groups in Mumbai Police” and it is their conspiracy to frame him.

More arrests are likely in the coming days, the source said.