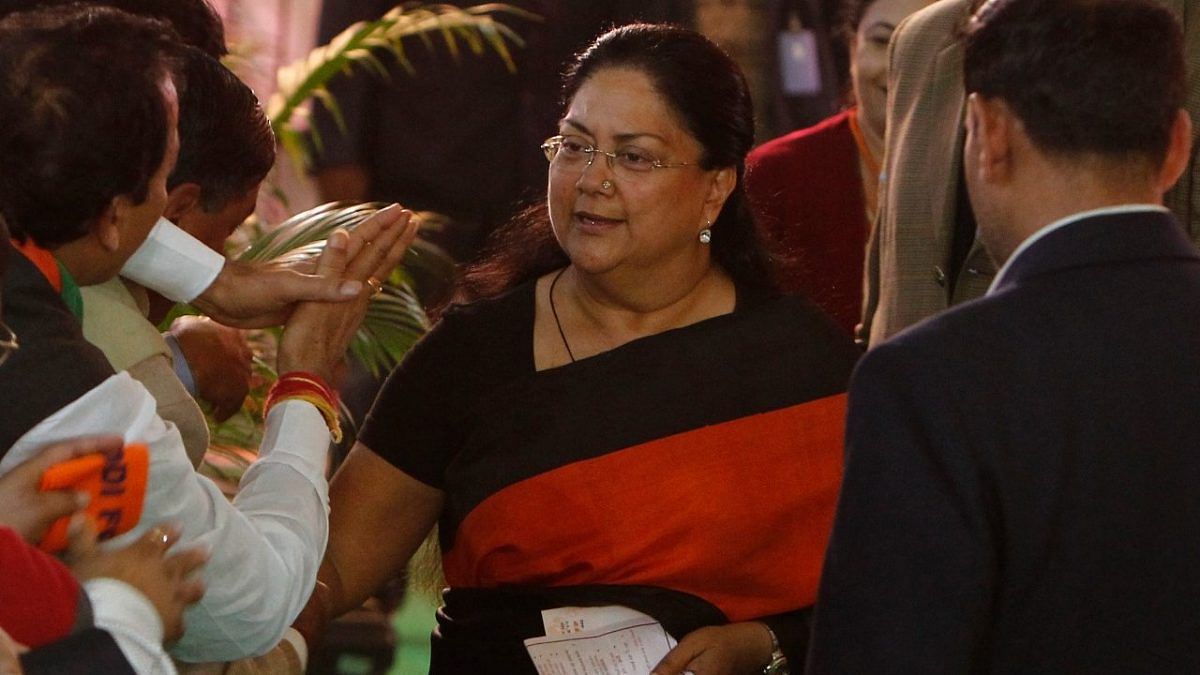 
New Delhi: The rift between former Rajasthan chief minister Vasundhara Raje and the BJP leadership seems to be widening with each passing day. Raje has stopped attending most of the meetings and has also not been participating in the activities organised by the state unit of the party, ThePrint has learnt.

“Hundreds of virtual meetings” have been organised over a period of time, but Raje did not attend most of them, a senior BJP leader in the state said. The recent episode of Raje, also a BJP vice-president, being sidelined in the new posters that have been put up at the state headquarters in Jaipur has only brought to the fore the fault lines in the state unit.

At the same time, many in the state unit claim Raje is trying to run a ‘parallel system’ with the focus only on her and not the party.

On 9 June, the state BJP launched a hashtag campaign aimed at the Ashok Gehlot government. While the entire state unit participated, Raje did not post a single tweet.

Earlier, the main hoarding featured the former CM and deputy leader of the opposition Rajendra Rathore, apart from Poonia and Kataria, besides the PM, Nadda and Union Home Minister Amit Shah.

In January, Raje supporters had formed an outfit called ‘Vasundhara Raje Samarthan Manch Rajasthan’. What raised eyebrows in the political circles was the fact that at a time when the BJP was concluding its ‘Sewa hee Sangathan’ programme, launched to help the needy during the Covid-19 pandemic, Raje was running parallel welfare programmes on her own.

Vasundhara Raje, who is considered close to veteran leader L.K. Advani, has had an uneasy relationship with the BJP high command ever since Narendra Modi and Amit Shah took centre-stage at the national level in 2014.

Having led the party to victory in the 2013 assembly election and secured all 25 Lok Sabha seats in the state for the BJP in 2014, Raje wouldn’t brook any interference in state affairs from the central leadership. In the run-up to the 2018 assembly election, she resisted Amit Shah’s move to appoint Gajendra Singh Shekhawat as the state BJP president and stalled it for two months.

Shah finally relented and appointed Madan Lal Saini as the state unit chief. Since the BJP’s loss in 2018 — when the party got 73 seats in the 200-member assembly — Raje has been sidelined in the party, with most appointments in the state unit being made without any consultations with her.

Speaking to ThePrint, about the state BJP hoardings, Satish Poonia said, “…everything in the BJP has a certain protocol, which is decided by the central leadership. They set the protocol and we all follow.”

He said the central leadership has decided that the hoardings in states where the party is in power will display pictures of PM Modi, Nadda and the chief minister. In states not ruled by the BJP, hoardings will carry the photo of the leader of the opposition and the state president, Poonia said.

“I can say with utmost responsibility that there is no issue with relation to these hoardings. If anyone is giving it a political colour then it is completely wrong,” he added.

ThePrint reached Vasundhara Raje through text messages and calls for a comment but did not get a response till the time of publishing this report.

“Apart from a single virtual core committee meeting of the Rajasthan BJP, she has not attended any other meeting. On her own, she keeps calling parallel meetings for several districts with her own aides,” added another leader.

A third senior BJP leader said: “She had been missing in action for quite some time and now that she has become active once again in politics, the issues of internal fighting have become the talk of the town. She has not been attending party meetings regularly and has also been missing from state BJP programmes.”

A close aide of Raje, however, said she has been actively involved in helping people during the pandemic, “despite some health emergency”.

“On Twitter too, through the office of Vasundhara Raje she has been extending help to the people. She has also been attending meetings as and when possible. People have been deliberately trying to spread such stories,” the aide said.

Charges of a parallel run

In January, Raje supporters had formed ‘Vasundhara Raje Samarthak Manch Rajasthan’, and demanded that Raje be declared as the party’s chief ministerial face for the 2023 elections.

BJP leaders say the former chief minister is closely involved with the outfit.

“This outfit has put in place teams at the state and district level and they conduct their own programmes. She may say that it has been launched by the supporters but she is actively involved,” another senior BJP leader said.

“Her supporters were seen distributing food packets to the poor families in different parts of the state under a campaign called Vasundhara Jan Rasoi,” the leader added. “The focus is not on the party or the state unit but completely on her. All the posters and banners of Jan Rasoi only have the picture of Raje and there is no mention of the party.”

A fourth BJP leader said that the campaign covered 5-7 districts, including Karoli, Bharatpur, Jodhpur, Sawai Madhopur and Jaipur. “The idea is to show her as the main leader and put pressure on the BJP that ignoring her can cost them dearly,” the leader said. The programme is being run across all the districts.

This is not the first time that Raje has tried to put the spotlight completely on her, the leader added. In March as part of her birthday celebration, she undertook a religious visit with a huge “show of strength”. “She used the opportunity to show the support she still enjoys and even reminded the central leadership of her family’s contribution as she addressed a public rally,” he added.

According to a source, Raje was supposed to undertake a yatra in the state. “The state leadership conveyed this to the central leaders and they strictly told her not to indulge in any such activities,” the source said.

“She has not attended most of the virtual meetings. We must have conducted around 400 so far. The only meetings she attends is when the central leadership is involved like the one where Arun Singh (BJP national general secretary) had come. Though even then she had reached quite late,” the source added.

“She also didn’t participate in any of the hashtags that were run by the state unit against the Ashok Gehlot government. While right from the president, the leader of the opposition tweeted, she did not post a single tweet. Her focus is only on her and not the party.”

Raje supporters, however, deny the allegations.

“During Covid-19, a number of daily wagers, labourers, were rendered jobless and the Gehlot government had promised to serve them food through Indira Rasoi. But barely after a few days, it was shut as the government did not give them funds,” said Prahlad Gunjal, former MLA from Kota North and a Raje loyalist.

“It is then that Vasundhara Rajeji told us that party workers should get involved and ensure no one goes to sleep hungry. Why are people raising objections to this noble work?”

When asked about the Jan Rasoi only featuring Raje and making no mention of the party, he said, “She has been the chief minister twice, is currently the vice-president so what is the issue in putting her photo? A party is made of people only. What is wrong with projecting her face and name? Without her, the BJP will find it difficult to come to power in the state”.

Also read: Congress must split to weaken BJP. Let those who want to join Hindutva exit