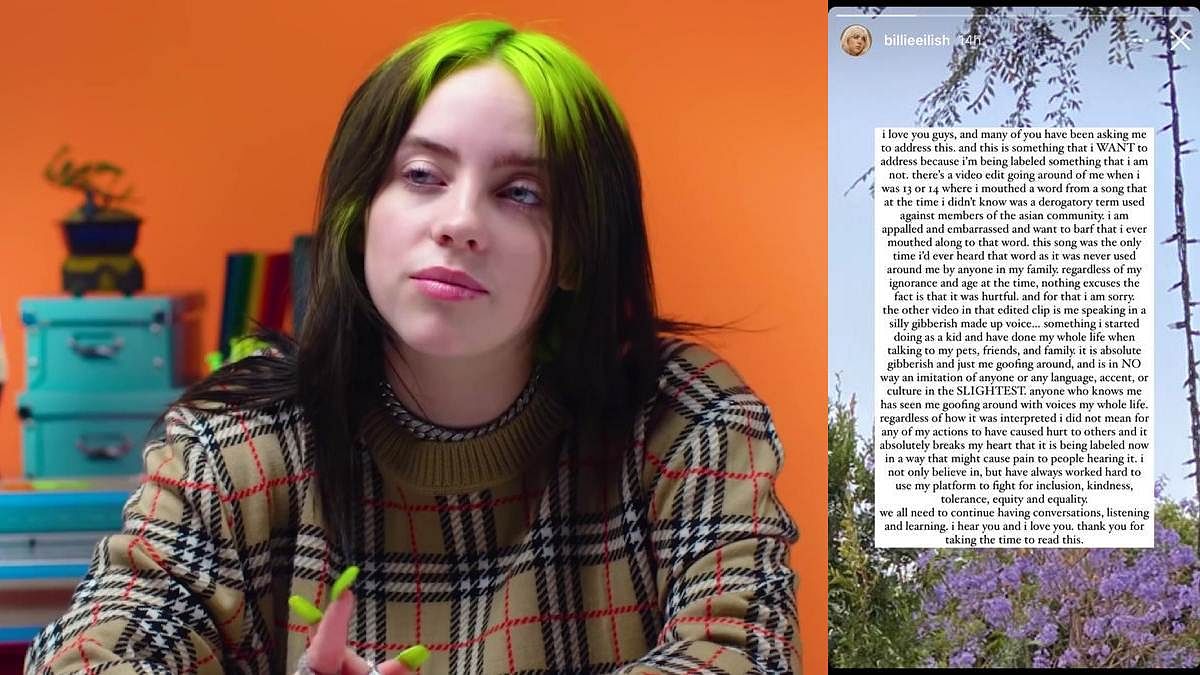 The clip showed a “13 year old” Eilish lip-syncing to the song, ‘Fish’, a 2011 song by Tyler, the Creator, which mentions “ch**k”, a derogatory term for Asian people.

The exact line in the lyrics read: “Slip it in her drink and in the blink of an eye I can make a white girl look ch**k.”

“i mouthed a word from a song that at the time i didn’t know was a derogatory term used against members of the asian community. i am appalled and embarrassed,” Eilish wrote in an apology note shared to her Instagram story.

The video, which first went viral on TikTok earlier this month, was re-shared on Twitter and garnered nearly 1 million views.

One of the clips in the video also showed Eilish “mocking” the Asian accent while another recorded Eilish’s brother, Finneas, allegedly calling her out for “talking with a blaccent”.

Many viewers deemed her acts racist and demanded a response.

A Twitter user posted: “i think she needs to clarify things because a lot of asian people are offended :/// i’m sad.”

i think she needs to clarify things because a lot of asian people are offended :/// i’m sad

the “im not asian but i forgive her” shit is so fucking stupid like how dumb can you be? https://t.co/dPZxfmQqNh

A user named Jessi wrote, “billie eilish has been racist to asians on multiple occasions (saying the c slur and mocking asian languages) but no one ever talks about it.”

billie eilish has been racist to asians on multiple occasions (saying the c slur and mocking asian languages) but no one ever talks about it.

Eilish, however, found support too. “…I feel like some people have been wanting to drag her or try to cancel her for a long time now, so this is their opportunity to try too,” a user posted.

Exactly and I feel like some people have been wanting to drag her or try to cancel her for a long time now, so this is their opportunity to try too.

‘In no way an imitation’

In her Instagram story, the singer said she was “speaking in a silly gibberish made up voice”, something she has done since childhood when talking to pets, friends and family.

The 7-time Grammy-winning artist added that it was “in NO way an imitation of anyone or any language, accent, or culture in the SLIGHTEST. anyone who knows me has seen me goofing around with voices my whole life”.

In a follow-up video, Lena, the TikTok user who first posted the video, wrote “she finally addressed this !!!”. She said she was “glad” and that it was “understandable and good she finally said something”.

With the United States seeing an increase in anti-Asian hate crimes during the pandemic, fuelled by the fact that Covid originated in China, people have started to become more conscious of casual racist remarks, with many people, online and offline, quick to highlight such incidents.

The killing of eight people of Asian origins at three massage parlours in Atlanta in March this year ignited a huge debate on the rising cases of racially motivated hate crimes in the US.

US President Joe Biden recently signed a bill to address the incidents of assault during the pandemic, with a special focus on the rise in violence against Asian Americans. The bill aims to make reporting of hate crimes more accessible at local and state levels by boosting public outreach.