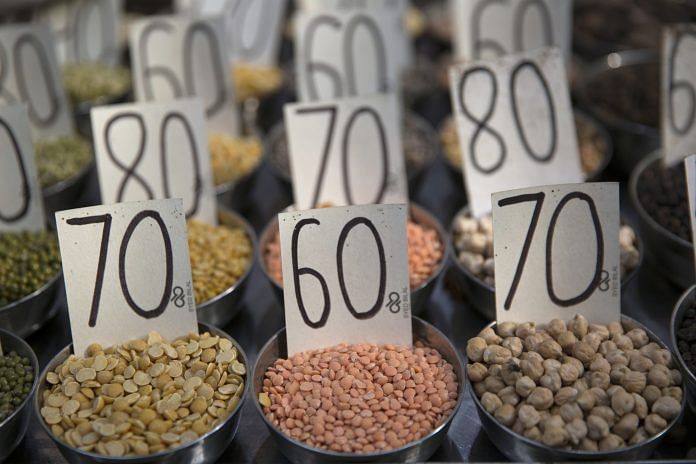 
New Delhi: The Modi government has implemented a stock limit on pulses under the Essential Commodities Act (ECA), with immediate effect, which will be effective until 31 October.

Under this order, stock limits have been prescribed for all pulses except moong varying up to different amounts for different stakeholders such as wholesalers, retailers, millers and importers.

According to the order, wholesalers can only stock up 200 Metric Tonnes (MT) (provided there should not be more than 100 MT of one variety) of pulses, retailers can only stock 5 MT while for millers, it is either the last three months of production or 25 per cent of annual installed capacity, whichever is higher.

A senior official familiar with the matter, on the condition of anonymity, told ThePrint that this has been done to rein the prices of pulses.

“The price of pulses was already shooting up when the country was under stringent Covid lockdown in April-May. The prices are expected to further shoot up with the gradual unlocking happening across the country and opening up of major commercial avenues of pulse consumption such as hotels, restaurants and the catering sector,” the official said.

“This coupled with the upcoming festival season will not only increase the prices of whole pulses but also of processed items in the market derived from pulses and their products such as besan etc,” the official added. “The stock limit will help in maintaining the availability of pulses in the market and to cool off prices until the import arrives in September-October this year.”

The central government has, incidentally, only been able to enforce stock limits under ECA since the Supreme Court has put on hold the implementation of three new farm laws, which have relaxed many provisions related to enforcing stock limits.

The enforcement of the stock limit is a second major intervention by the government in the pulses sector this year.  It had earlier this year made changes in import policy of pulses, for the first time in three years, by shifting tur, urad and moong from restricted to the free category.

Since August 2017, the import of pulses had been put under quantitative restrictions — that is the government limited the quantity or permitted import to only to a few stakeholders such as millers, traders and processors.

The price of pulses has been surging this year, especially at a time when prices of various food items such as edible oil, egg, fish, chicken and pulses are touching new highs in domestic markets.

The prices of pulses have witnessed sustained inflation this year, hovering above the Rs 100/kg in the retail market.

While tur/arhar and urad retail prices have been at Rs 120-125/kg, the price of masoor has also increased to Rs 90/kg.

This has been further aggravated by the fact that buffer stock of major pulses such as tur/arhar and chana with the government has dwindled severely in 2021 as compared to last year making it difficult for the government to include pulses in its food aid scheme.

Two major factors are responsible for the lower buffer stocks. Due to the market prices of pulses exceeding the minimum support prices, the government agency, NAFED, was not able to procure pulses in the kharif and rabi season in sufficient quantities to maintain the buffer stock.

Another reason was that due to the distribution of a large quantity of pulses under the Pradhan Mantri Garib Kalyan Yojana (PMGKY), NAFED was faced with a depleting carry-over stock in the current fiscal.

This has also wiped off the accessibility of protein-rich diets to poor people in the country this year as unlike last year, the government will not be distributing pulses as part of  PMGKY this year to over 19 crore families in the country.