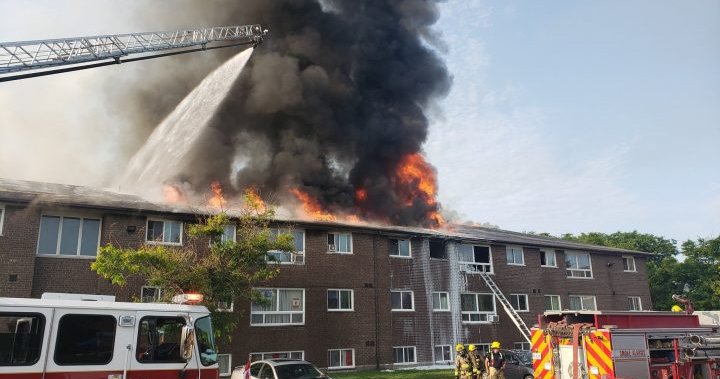 Two people were rescued from a large fire at an Oshawa apartment complex on Saturday, officials say.

The blaze occurred in the area of Ritson Road South and Valley Drive.

Images from the scene showed huge flames burning through the roof of the complex and thick black smoke rising.

Oshawa Fire Services tweeted that fire crews rescued two victims upon arriving at the scene, both of whom were taken to hospital by paramedics.

Fire officials later said one victim had been released from hospital while the other remained in critical but stable condition.

Residents displaced by the fire are able to use the South Oshawa Community Centre for temporary shelter, officials said.

A Durham Region Transit bus was brought in to transport those affected.

There is no word on what caused the blaze.

Displaced residents of 1420 Ritson Rd S can proceeded to South Oshawa Community Centre for temporary shelter. Durham Region Social Services is on site. The Durham Regional Transit bus located on Madawaska Ave will provide transportation for those in need. pic.twitter.com/6QDpQ2eW1e

Update from the scene at 1420 Ritson Rd S, upon arrival crews rescued two victims and transported to hospital by paramedics. Many thanks to @DRPS, @DurhamParamedic and @Durham_Transit for their assistance and support. Great work by all. @DanCarterOshawa @oshawacity @iafflocal465 pic.twitter.com/vgXKuLRXm2