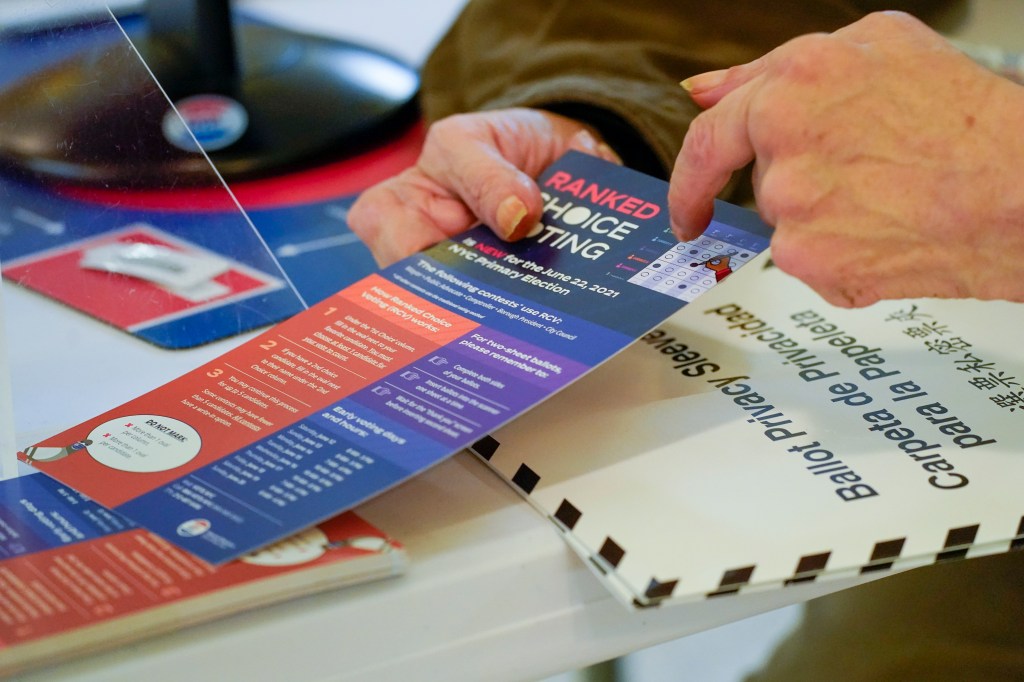 Want to know what the future of Denver politics may look like? New York City’s Democratic mayoral primary gives us plenty of clues.

But first a refresher on Denver’s municipal election system.

In May 2023, Denver is scheduled to hold general elections for mayor; auditor; clerk and recorder, and all 13 city council seats. In each of these races, if no candidate receives more than 50% a runoff election with the two highest vote-getters is held 30 days later. There, the two candidates have an opportunity to explain their vision and policy differences to Denver voters.

But that could soon change.

This week, Gov. Jared Polis signed House Bill 1071 into law, which allows municipal elections to use ranked-choice voting (RCV) as part of a coordinated election.

RCV is a voting method that allows voters to rank their candidates in order of preference. If no candidate earns a majority after counting first choices, the last-place candidate is eliminated and the second-choice votes on those ballots are lifted to be recalculated among the remaining candidates. The process continues until a candidate receives 50% of the vote.

Proponents of that election system want Denver to adopt a rank choice voting system. Proponents assert that RCV provides more choice to voters, discourages negative campaigning, and saves money by eliminating runoff elections. Clerk and Recorder Paul Lopez is studying various changes to how Denverites elect their officials, including the timing of the May 2023 election which could get moved to another month and what type of RCV model Denver could administer.

RCV could be referred by City Council to Denver voters or separately placed on the ballot through the initiative process by RCV proponents.

Ranked-choice voting made its mayoral debut in New York’s June 22 Democratic primary, where voters ranked up to five of the thirteen candidates from first to last on their ballots. In the first round, the last-place candidate is eliminated. Those votes are then reallocated to the candidates whom his or her voters ranked second. The process continues until one candidate has claimed a simple majority, making him or her the winner.

Initially, Eric Adams, a relative moderate, garnered 31.7% of the first round in a race full of punches and acrimony.  Adams was a police captain, state senator, and from 1995-2002, a registered Republican before becoming Brooklyn’s borough president in 2014.

Maya Wiley, former counsel to Mayor Bill de Blasio, came in second with 22.3%.  Her biggest endorsement came from Rep. Alexandria Ocasio-Cortez and she enjoyed the support of the progressive movement.

Kathryn Garcia, former city sanitation commissioner and interim head of the Housing Authority, was endorsed by the New York Times and came in third with 19.5% of the initial vote.  In the final days, Garcia campaigned with former presidential candidate Andrew Yang, who came in fourth. Adams criticized the alliance saying that it was aimed at preventing a “person of color” from winning the race.

Seven days after the election, New York’s Board of Elections released new results after 11 rounds of RCV elimination and it showed Garcia jumping over Wiley into second place with Adams holding onto a 51% to 49% margin, reflecting just 16,000 votes. Remarkably, the Board ran these elimination rounds before even adding in the initial results of 120,000 absentee ballots.

Just hours after releasing the results, the board removed the updated RCV tabulations from its website after discovering that it had mistakenly included 135,000 “test ballots” in its vote tally, sending the election into chaos.

Regardless of the ultimate outcome, this confusing, complicated process will surely fuel distrust and disenfranchise voters and may lead to lower voter turnout in future elections. Former President Donald Trump wasted no time in attempting to compare the mishap to the “vast irregularities” he falsely claimed in the presidential election.

Cities must invest substantial time and money educating and preparing voters long before an RCV conversion.  That’s the precise issue that the New York City Council’s Black, Latino and Asian Caucus highlighted in criticizing the board’s rollout and execution this week.

In addition to undermining the integrity of the outcome, the New York City example provides ample evidence that RCV can be more costly than a simple runoff election between the two highest vote getters.

And, unlike a runoff election, it is highly unlikely that voters will have an understanding of the various candidates policy positions too in order to confidently rank multiple candidates.

As a result, voters are likely to leave columns blank on their ballots. In the New York example, suppose you only ranked your top two or three candidates and they were eliminated. Your now-blank ballot wouldn’t be counted in the final rounds at all and you would not have had an opportunity to express any choice about the two leading candidates.

Further, in an ironic twist of fate, those choosing the losing candidates, ultimately have the biggest voice in determining the winner.

RCV may also give life to chicanery and extreme candidates creating coalitions that could lead to absurd results inimical to majority voter wishes.

Denver should think long and hard before replacing a working system with the political flavor of the month.

Doug Friednash is a Denver native, a partner with the law firm Brownstein Hyatt Farber and Schreck and the former chief of staff for Gov. John Hickenlooper.