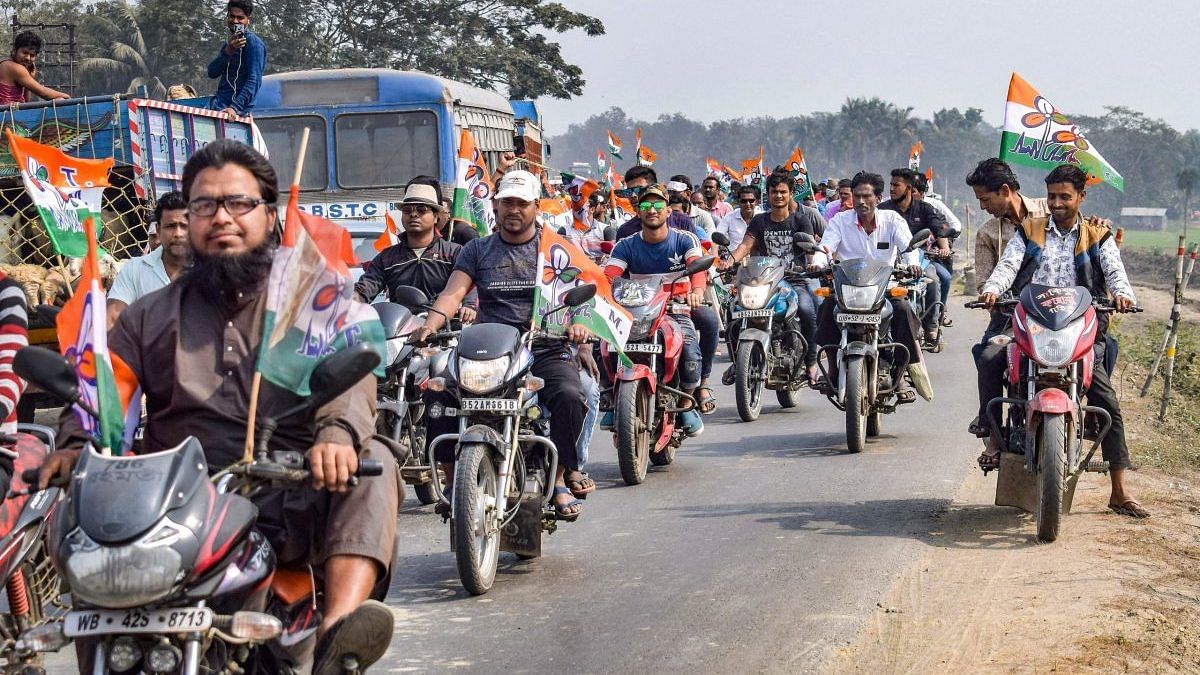 
Kolkata: The Trinamool Congress (TMC) saw an exodus of leaders and cadre ahead of the assembly elections in West Bengal.

Now some of its former grassroots workers in the state’s rural areas are returning — but not before being subjected to ‘purification’ ceremonies, in some cases being literally disinfected, and very public apologies, known as Muchleka in the villages.

While the Trinamool Congress brass says it has nothing to do with any of this, BJP workers seeking to return to the party are being made to undergo suddhikaran (purification) with Gangajal (water from the Ganga), are having their heads tonsured and being made to carry out ‘apology-campaigns’ on Totos, the battery operated rickshaws that are an indigenous public transport in Bengal villages.

The ceremonies are being organised by local Trinamool units, particularly in villages of Birbhum district.

The district had seen tremendous groundswell in favour of the BJP in the 2019 Lok Sabha elections. The BJP didn’t win either of the two Parliamentary seats in the district but led in five of 11 assembly segments.

In the 2021 assembly elections, however, the Trinamool won in 10 of 11 assembly constituencies.

Senior Trinamool leader and the party’s Birbhum district president Anubrata Mondal told ThePrint that at least 25,000 cadre have realised that they “committed a blunder by joining and voting for the BJP”, and have have already re-joined the TMC in Birbhum and Bardhaman.

Mondal, who also holds charge of three important areas — Mangalkot, Ketugram and Ayush Gram — in Bardhaman, added that it was the villagers who wanted those returning from the “party of their torturers to do certain things”.

“The Trinamool Congress has nothing to do with this; local villagers are making them atone and these are spontaneous,” he said.

The Trinamool’s top leadership has completely dissociated itself from such events, saying it has issued no such instruction to its district or block leadership to organise such programmes.

“There is no such instruction from the party. The local units are doing such things but the party has asked all to be tolerant and kind in victory. We are not a party that seeks revenge,” said Trinamool MP Sukhendu Sekhar Roy.

A month of ‘spontaneous atonement’

The events to re-induct former Trinamool cadres have been going on for the past month.

The first such incident occurred on 8 June, when a group of BJP workers in Birbhum, started taking the round of their respective panchayat areas in Totos.

Armed with BJP flags, they began announcing that they were “misinformed and misguided” about panchayats not working and about cut money. “Those were all lies. We committed a sin by working for the BJP,” the BJP workers said. “Please forgive us.”

Since then, multiple such incidents have been reported across villages in the district.

The latest of the re-induction events was on 24 June, when around 150 BJP workers joined the Trinamool in Birbhum’s Illambazar. They were sprayed with disinfectant.

Days earlier on 19 June, the local Trinamool Congress unit had organised a “purification process” for around 300 such cadres in Birbhum’s Sainthia.

The BJP cadre, holding posters with lines such as ‘Joining BJP was a blunder’, ‘BJP is a party of tyrants, please forgive us and take us back’ were standing near the party office. After high drama, local Trinamool leaders reached the spot, sprinkled Ganga water and inducted them into the party.

“We did not ask them to do this. They (the BJP cadre) did this on their own. They are repentant,” Mondal said. “In many places, they are writing public apologies and joining us. We did not ask them to join us. I am still getting hundreds of calls everyday from leaders and workers, who want to come back to our party fold.”

In Hooghly’s Khanakul, on 22 June, around 200 BJP workers joined Trinamool. At least half a dozen of them had their heads shaved as prayaschitta (atonement) for joining the BJP.

The local MP (Arambagh), Aparupa Poddar, who was present at the spot during the process, told ThePrint that she would not comment on the incident. “I will talk about it in the political forum and not in the media. Many workers are wanting to join us back. This is their decision,” she said,

Dilip Jadhav, Trinamool district president in Hooghly, added, “These are not an official joining process. In villages many people are doing many things. How can we be responsible for all these?”

“We have a strict process of inducting people from any other party. We need to prepare a list, send it to the state committee and can induct cadres only after the list is vetted and approved by our leaders,” he added.

“But it is true that people at the ground level always want to side with the ruling party and that is what they are doing now. They want to prove a point so that they can be inducted. These are not the party’s policies that you are seeing. These are stray cases.”

State BJP president Dilip Ghosh rubbished the claims of these incidents being “spontaneous”.

“The workers are forced to join Trinamool and go through such a humiliating process. Had these been stray incidents, as claimed by some Trinamool leaders, would you have seen so many happening across districts?” he asked.