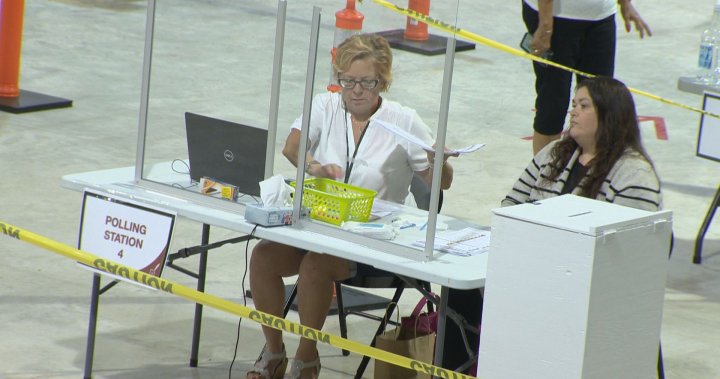 According to voters who showed up at the Kahnawà:ke sports complex to vote Saturday, the 2021 Mohawk Council of kahnawà:ke elections stood for one thing above all.

Community officials say the elections are special this year. In addition to filling 11 council chief positions — and there were 17 candidates for that — the votes were held to fill the vacancy left after the passing of longtime Grand Chief Joe Norton last summer.

In the 2018 elections, Norton won by acclamation. This time, there were five candidates vying for the position.

“It’s going to be like a start of a new generation, you could say,” said electoral officer Angus L. Montour.

That there were so many candidates, some believe, is an indication that there’s been a shift in the community.

“I think our community is at a critical point, too,” resident Arlene Horne told Global News outside the sports complex. “Things are changing within the world, you know?”

For some, one sign of that change is that there are two women running to replace Norton.  One is Kahsennenhawe Sky-Deer who has 12 years of experience as a council chief.

If she wins, she thinks she’d be an inspiration to other young women.

“Especially coming from an LGBTQ2S community also,” she pointed out, “representing the people here, that that doesn’t matter.”

Officials say there is a buzz around these elections and they expect the turnout to be 20 to 30 per cent higher than average, in spite of COVID-19 restrictions.

Mike Delisle, former Grand Chief from 2004-2015, and who ran for a seat as council chief Saturday, expects the person who replaces Norton to have her or his hands full.

“Land grievances, land claims as Canada says, in my heart and mind is the preeminent issue,” he told Global News.

He also believes the Quebec government needs to engage more with the community.

Another issue he thinks the new chief will have to deal with is the discovery of bodies at former residential school sites.

“The church, as well as the crown, being suspects, if you will, that’s obviously going to be a major factor going forward as well,” he said.

There are other challenges too — housing, health, education, different visions of how the community of 8,000 should be run — are things that some voters like Boyer see as motivation.

“It makes us want to work harder for ourselves, become a stronger nation, move forward,” she said.