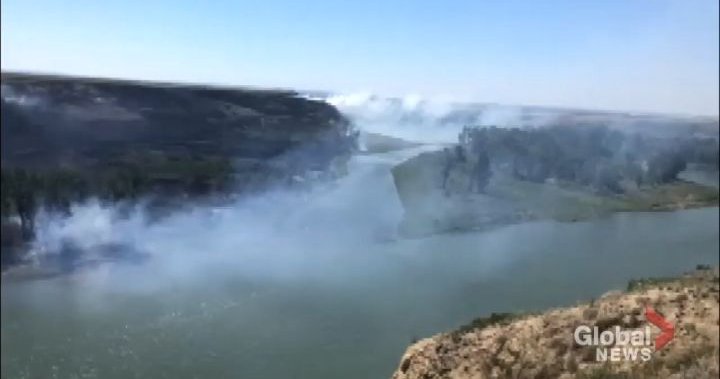 A 40-year-old man from Langdon, Alta., has been charged in connection with grass fires on Siksika Nation that the RCMP say were intentionally set.

Philip John Strange was arrested on Canada Day. On Friday, the RCMP issued a news release and said he had been charged with arson and trespassing on a reserve.

Strange is scheduled to appear in Siksika Provincial Court on Aug. 12.

“This past week has been trying on the Siksika people,” said Sgt. Scott Mercer of the Gleichen RCMP. “These intentional acts of property damage affect the well-being and security of everyone that lives here.

“We are asking people to remain vigilant and report any suspicious activity immediately to the police.”

RCMP responded to reports about a suspicious person on the First Nation who witnesses said was setting grass fires.

While no injuries were reported and no structures were damaged, the RCMP said the fires caused “extensive” damage to land that “includes areas of cultural significance.”

The chief of Siksika Nation said the land that was set ablaze is used by members of the First Nation for tobacco ceremonies and other traditional ceremonies.

Ouray Crowfoot added that “every inch of Siksika is what we consider sacred land.”

“There’s not many places on Siksika that you can point to that aren’t sacred,” he told Global News, adding that he does not know the motive behind the fires.

Crowfoot said he believes a suspect was arrested so quickly because of a combination of watchful members of the community, his nation’s relationship with the RCMP and the growing effectiveness of the nation’s own security services.

“If anybody feels like they can come on the Siksika Nation and do any kind of damage or vandalism, they will be under surveillance,” he said.

“I can’t speculate,” Crowfoot responded when asked about what may have prompted someone to start the fires. “I won’t get into the mind of someone burning a field.”

The grass fires broke out just days after police were called to two different churches on the Siksika Nation. In one case a fire started and in another police believe someone tried to start a fire. In both cases, the RCMP have suspected arson.

“There is no discernible link between this arson (grass fires on Siksika Nation) and the deliberate fires set at the Catholic or Anglican churches earlier this week,” police said on Friday.

There has been a wave of church fires and churches being splattered with red paint across Canada ever since the discoveries of hundreds of unmarked burial sites at former residential schools in B.C. and Saskatchewan.

Crowfoot acknowledged that the discoveries have unleashed a painful but important new chapter in Canada and people are reacting in different ways.

“It is a turning point right now in Canada,” he said. “These residential schools, the stories we’ve been telling for decades, are now coming to life. They’re now believed when you see these actual children coming from the ground.

“Now that these children are literally coming out of the ground, so is the emotional baggage that the survivors put away… They’ve packed it away in some kind of compartment in their body.”

Crowfoot said it is no longer possible for people to deny the atrocities that unfolded at residential schools, traumas that went beyond the schools’ aim of trying to erase Indigenous culture and identity.

“I ask Canada, I ask the Catholic church, I ask the Anglican church, where is the reconciliation?” he said. “A lot of these activities were criminal activities… Sexual abuse… against children… physical abuse, emotional abuse.”

Crowfoot said many residential school survivors have been told for years to hide their pain and “get over it” — something he believes has added to the horror of what unfolded at the schools.

“You can see the trauma that it’s caused for multiple generations,” he said.

Despite the reality that Canadians are now being forced to confront the truth of how Indigenous people have been treated, Crowfoot suggested he believes there is hope for finding a way forward.

“As a chief, when I looked around our ceremony yesterday — our healing event — we had a lot of non-nation members in that audience,” he said. “It does show that the gap is being bridged.”

Watch below: Some Global News videos about residential schools in Canada.

Crowfoot said while he believes many Canadians are beginning to view the country’s history more fully, there are also signs that hate still exists. He said the RCMP is investigating several recent incidents targeting Siksika Nation members that are believed to be motivated by hate.

Siksika Nation is about an hour’s drive east of Calgary.

The Indian Residential Schools Resolution Health Support Program has a hotline to help residential school survivors and their relatives suffering with trauma invoked by the recall of past abuse. The number is 1-866-925-4419.