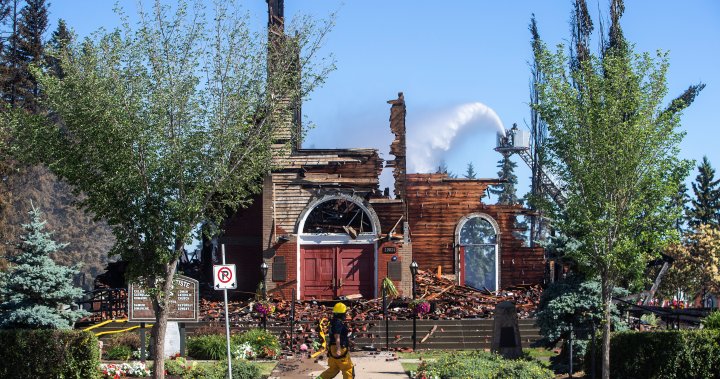 Prime Minister Justin Trudeau is speaking out against multiple acts of vandalism that have taken place across Canada, from the burning of churches to red paint being splattered across buildings and toppled statues.

“It is unacceptable and wrong that acts of vandalism and arson are being seen across the country, including against Catholic churches,” Trudeau said, speaking at a press conference on Friday.

“I understand the anger that’s out there against the federal government, against institutions like the Catholic Church. It is real and it’s fully understandable, given the shameful history that we are all becoming more and more aware of and engaging ourselves to do better as Canadians.”

Read more:
Trudeau says ‘be honest’ about our past, as residential school reflections mark Canada Day

In recent days, four small Catholic churches on Indigenous lands in rural southern British Columbia have been destroyed by suspicious fires and a vacant former Anglican church in northwestern B.C. was recently damaged in what the RCMP said could be arson.

Two recent incidents on the Siksika First Nation in Alberta are also under investigation.

On Monday, the RCMP said a fire was deliberately started at the Siksika First Nation Catholic Church. On Tuesday, they said an attempt was also made to start a fire inside the Siksika Anglican Church but was unsuccessful. Alberta’s RCMP is also investigating the burning of the St. Jean Baptiste Parish Church, which unfolded on Wednesday.

The RCMP in Indian Brook, N.S., are investigating a suspicious fire that damaged a Roman Catholic church on Wednesday. The St. Kateri Tekakwitha Church serves the Sipekne’katik First Nation.

In addition to the fires, churches and statues have been targeted in other ways in recent days. Calgary’s police service is investigating the vandalism of 10 different churches that they say took place overnight on June 30.

“Orange and red paint was placed on the exterior of the churches and one had a window smashed so paint could also be thrown inside,” read a release from the City of Calgary.

“Handprints, the number ‘215’ and other markings suggest the vandalism was in response to the graves recently found at former residential schools.”

Two prominent buildings in St. John’s, N.L. and a statue dedicated to the local police force were also recently vandalized with bright red paint, and the statues of Queen Victoria and Queen Elizabeth were toppled on the grounds of the Manitoba legislature during a Thursday rally in Winnipeg.

All of the aforementioned incidents are still under investigation.

The vandalism follows the discovery of over 1,100 unmarked graves at former residential school sites across the country — though the motive for many of these acts has not yet been firmly established.

Last week, Cowessess First Nation in Saskatchewan said a ground-penetrating radar detected an estimated 751 unmarked graves at the site where the Marieval Indian Residential School once sat. The news came not long after the remains of 215 children were found at another former residential school site in Kamloops, B.C.

Just one day before Canada was set to celebrate its national pride on July 1, the Lower Kootenay Band said a search using the same ground-penetrating radar technology found 182 human remains in unmarked graves near a former residential school site in Cranbrook, B.C.

Speaking Friday, Trudeau warned that the incidents at churches could be robbing families of a source of comfort in the wake of the horrific discoveries.

“I can’t help but think that burning down churches is actually depriving people who are in need of grieving and healing and mourning from places where they can actually grieve and reflect and look for support,” he said.

“We shouldn’t be lashing out at buildings that can provide solace to some of our fellow citizens.”

“This is not the road to reconciliation. Reconciliation builds up our country. Actions like this tear down and destroy,” he said, linking to a BBC article about Queen Victoria’s statue being torn down.

“I believe in Canada — and that includes our ability to meaningfully address our past, while securing a future that includes everyone.”

Politicians aren’t the only ones speaking out about the recent events.

In a video posted to YouTube on Tuesday, Arthur Noskey, the Treaty 8 First Nations of Alberta grand chief, pleaded with members of the community to leave the churches alone because the destruction of these buildings could take important evidence down with them.

“We’re asking you to refrain from vigilante actions against the church buildings. We’re discouraging it…. We don’t want to destroy evidence, and these are crime scenes,” Noskey said.

“We’re going to do this right.”

He said there are schools adjacent to reserves, and he knows people want “to do something right now, right away.”

“I even feel that way many times,” Noskey said.

But, he warned, if communities act “with a heart of anger or agitation,” they will “miss out on doing it right.”

Read more:
‘Not something you can get over’ — Survivors, youth reflect on lasting residential school impacts

National Chief of the Assembly of First Nations Perry Bellegarde voiced a similar sentiment in a press conference on Wednesday.

“I can understand the frustration and the anger,” he said, “and I would say that burning things down is not the way to proceed.

“I would say building things up would be the better way to proceed and build relationships. I can understand the frustration, the anger and the hurt and the pain. There’s no question. But to burn things down is not our way.”

Two of the churches that were vandalized in the series of incidents were Ukrainian Catholic Churches. But these churches provide important supports for the community — especially during the heatwave that’s hitting Western Canada, Roman Zakaluzny, Chairman of the Ukrainian Catholic Civil Liberties Association, told Global News in a Friday interview.

2:43
Calgary police investigate after at least 10 churches targeted with red and orange paint

He said the congregations are “devastated.”

“The heat (in Calgary) is overwhelming, and they got woken up on Canada Day with news that they had a cleanup to do,” said Zakaluzny.

“So they spent the day using chemicals to remove graffiti that was all over their church walls, the church windows, the church signs and of course, our memorial plaque.”

He added that the Ukrainian Catholic Church had nothing to do with the residential school system.

“Everyone should take a breather, a step back and calm the waters.”