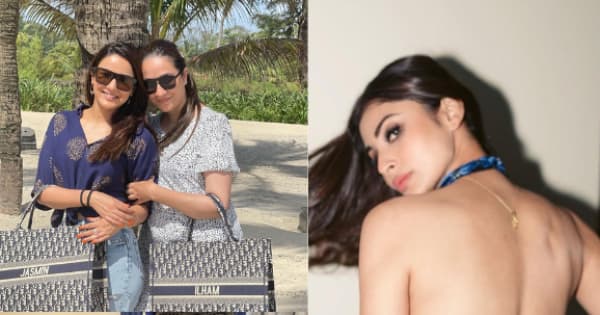 Hola friends, it’s time for our weekly wrap of the best posts on Instagram. These celebrities sure put in a lot of thought into what goes on their gram. These days, reels, videos, pictures posts have been shared on Instagram by various television celebrities that went viral in no time. Also Read – ‘Nature lovers’ Sanjeeda Shaikh and Ayra Ali have fun in a lake with this German Shepherd is the mother-daughter goals we all want – watch video

Jasmin Bhasin celebrated her 31st birthday earlier this week. It was a happening affair with her beau, Aly Goni and his family attending the same. The actress shared a couple of reels shot by Aly on her gram. Jasmin was seen flaunting her various looks and grooving on the latest music such as Paani Paani and Insane. Have a dekko at her videos below: Also Read – Sanjeeda Shaikh shares daughter Ayra Ali’s new video and we are in love with the little one’s cuteness and intellect

Rubina Dilaik took up the hip-walk challenge on Instagram. The actress twisted it and did a kind of moonwalk. The Shakti Astitva Ke Ehsaas Ki actress captioned the post saying, “Gotta Twist.” She began the video by applying lipstick and looked very pretty in Saumya’s get up. Have a dekko at the video below: Also Read – Sanjeeda Shaikh and Ayra Ali’s late-night homework session is the most ADORABLE thing on the internet – watch video

Bigg Boss 14 contestant and actress Pavitra Punia, who is dating her fellow contestant and actor Eijaz Khan, recently, grooved to one of the most romantic songs ever Pehla Nasha. She captioned the post saying, “First dance together after Biggboss From #allahduhaihai to #pehlanasha Always twining.” They look really good together, don’t they?

Rupali Ganguly penned a heartfelt note on meeting veteran actor Mithun Chakraborty, Madalsa Sharma‘s father-in-law, on the sets of Anupamaa. She shared several BTS pictures on her gram and wrote, “When Happy memories come visiting. The first time I ever faced the camera was with him when I was 4 yrs old. My first Hindi film as a heroine was with him … (set par Pappa aur inse bohot daant padti thi!) He is the person who always admonished me for not taking myself seriously as an actor. Elated and Overwhelmed beyond measure when he said he is proud of me and that my performance moved him to tears ….. aur kya chahiye …. Aise laga jaise mehnat safal ho gayi. The original Rockstar – My father’s favorite …. @mithunchakrabortyofficial thank u for blessing our set with ur presence. Thank u @madalsasharma.” Have a dekko at her post here:

A couple of days ago, Aamir Ali shared a heartwarming video of her mother and daughter’s interaction. Aamir’s mother had turned 75 and Ayra had dropped by to wish her grandmother. Ayra Ali was seen feeding cake to her granny as well. Aamir captioned the post saying, “Maa turns 75.. thx for loving me unconditionally n being there.. I’m always there with u..N plz stop stalking me on Insta n advising me Wat to post.. love u #maa #birthday #love #mom.” Aamir Ali and Sanjeeda Shaikh had reportedly welcomed a baby girl in 2019 via surrogacy.

Mouni Roy is back with flaunting her back. The Brahmastra actress shared a couple of pictures on her Instagram from her latest photoshoot. And boy oh boy, she looks HOT. Mouni is seen in a blue brocade print halter-neck and backless jump suit. She inserted a witty caption which read, “Oh, how I wish I could shut up like a telescope! I think I could, if only I knew how to begin.” For, you see, so many out-of-the-way things had happened lately, that Alice had begun to think that very few things indeed were really impossible.”