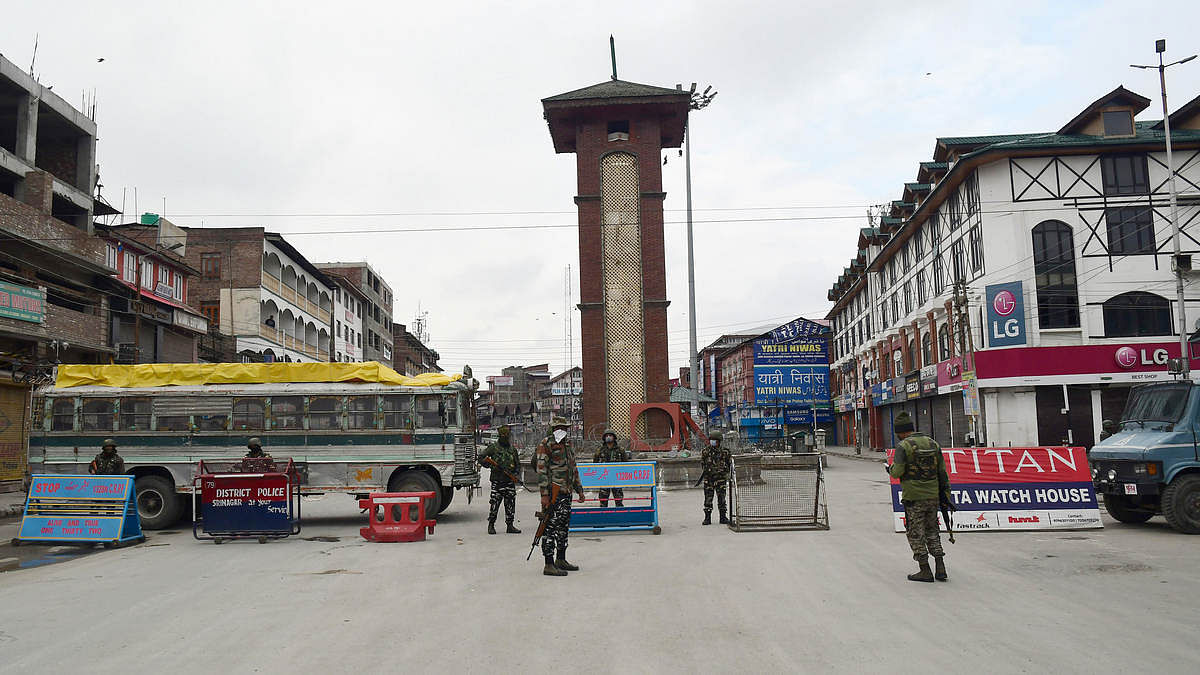 
A few days ago, I happened to enter a chat room on the popular social media app Clubhouse. The discussion had no stated title or theme. It was simply a bunch of people talking about what they referred to as the “freedom struggle”. On hearing the comments, it became apparent that I was in a large Kashmiri group with members hailing from Srinagar and outlying areas such as Anantnag, Shopian and Bijbehara. A quick scan of the participants’ list revealed that there were only two Kashmiri Hindus in the group — myself and another gentleman. One of the speakers mentioned the minority Pandit community, loudly proclaiming that they could not have a stake in the future of an independent Kashmir because Kashmiri Pandits were an integral part of the Indian Union. At this, the other Pandit in the chat room chimed in saying that the community was entitled to a seat at the table like everyone else in the room. But someone interjected, calling him a part of the “Indian occupation” and from there, it all went downhill.

I raised my virtual hand in the Clubhouse room and was briefly given the podium. In a few minutes, I touched on some key topics, primarily the need for resettlement of Pandits in the Valley, especially those who did not have the wherewithal to relocate elsewhere and were still languishing in dilapidated refugee quarters. The person who spoke after me stated categorically that Pandits were welcome in Kashmir on the condition they severed all ties with India and joined the “freedom struggle” or else there could be no guarantee of their security.

Again, I tried to raise my virtual hand to respond but realised I had been blocked.

Some days after this curious exchange on Clubhouse, I ran into a reporter who works for a London-based digital news outlet focused on the Middle East and North Africa. I had written to him earlier, complimenting him on what appeared to be a balanced piece on Pandits. Therefore, I was all the more surprised when he dubbed me a “collaborator” for returning to Kashmir without surrendering my Indian identity despite knowing that I am a Kashmiri. According to this journalist as well, the minority Hindu community was welcome in Kashmir only if they severed all ties with India.

I was bemused but also taken aback by such vitriol. I soon realized this type of casual bigotry was par for the course in the fever swamps of Kashmiri social media discourse and otherwise.

Smear campaigns and half truths

A family of Pandits running a successful business near Srinagar was smeared by one Samiullah Chalaroo, a resident of Chattabal township on the outskirts of the city. Using fake Twitter and Facebook accounts, Chalaroo accused the Pandit family of playing informers for the Indian security forces, thereby helping them nab militants. Acknowledging the grave danger to the family, Srinagar SSP Sandeep Chowdhury traced the social media accounts of Chalaroo who was arrested shortly thereafter. It turned out, he was a habitual offender.

In local parlance, those who are seen loyal to the Indian State are labeled as “touts”, “informants” or “collaborators”. This makes it easy for Pakistan-sponsored terror groups such as Lashkar-e-Tayyeba or Jaish-e-Mohammed to identify and mark them for elimination. Veteran Kashmiri journalist Shujat Bukhari was marked for elimination in a similar manner, as were many others.

Such loaded terms are used most often by ‘over ground workers’ like Chalaroo, or others who provide support to militants through social media or traditional news outlets. They are in fact the real collaborators in this macabre scenario.

The media bias in the Valley tends to be pronounced and very transparent. A 2019 survey found that out of 132 published media stories about Kashmir between 5 August and 3 September 2019 in some of the mainstream news outlets, just three per cent mentioned Kashmiri Pandits. Clearly, it’s not an issue that resonates with them as it puts a dent in the separatist narrative.

Also read: Kashmir issue is riding on Palestinian cause to gain global support. But who is behind it?

The menace of over ground workers

According to an article by Colonel A.S. Chonker of the Centre for Land Warfare Studies, “Over ground workers (OGWs) have always been the mainstay for an insurgency movement.

Previously, OGWs were primarily involved in logistics support and intelligence gathering. Of late the distinction has blurred considerably with OGW also capable of carrying out small scale strikes while retaining the capability to mix rapidly with the population. OGWs also become a significant tool for strategic communication and recruitment by their handlers in J&K.”

Then there are OGWs who help orchestrate acts of terror in tandem with their counterparts in Pakistan. After the Pulwama attack, the suspension of mobile and internet networks had forced the terror networks to shift base to neighboring regions like Chandigarh. A National Investigation Agency (NIA) probe revealed that three of Jaish-e-Mohammed’s OGWs, namely Zahoor Ahmed Khan, Shoaib Manzoor and Suhail Javed Lone, were allegedly using internet services in Chandigarh to communicate with their Pakistan-based handlers Abu Hamza and Abu Bakar. Their assigned duties included ferrying arms and militants across the border into Kashmir. The rationale behind strategic suspension of internet services in terror-infested regions such as the Valley is evident.

Not long after my experience on Clubhouse, a Bharatiya Janata Party councilor, Rakesh Pandit, was murdered in Tral where he had gone for an informal visit. Soon after, a spate of killings targeting both innocent civilians and officers employed with Jammu and Kashmir Police ensued. One of the casualties in this murderous spree was inspector Pervaiz Ahmed Dar, killed while returning from prayers in Nowgam. Inspector Dar is survived by his wife and two children aged 10 and 13 years. In a similar attack, J&K Special Police Officer Fayaz Ahmed, was shot dead, along with his wife and daughter by two Jaish-e-Mohammed militants in Pulwama.

When terrorists target innocents in the Valley, or when their acts of murder are glossed over by journalists and academics in distant Mumbai, Delhi, US or UK, it’s not them who suffer the consequences but small business owners, artisans and rank and file Kashmiris. It should be abundantly clear to anyone but the most delusional that militants and their proxies are not remotely interested in the wellbeing of Kashmiris and certainly not motivated by any romantic notion of “freedom.”

Also read: Jagmohan’s death a personal loss for Kashmiri Pandits. He saved us, became a victim of lies

For many of us, this author included, having grown up under the influence of mushy liberal values, it can be difficult to come to terms with the hard and often cold-blooded decisions required to protect our communities and nation from forces that would like to tear them asunder. Good art and literature can help us understand the broader context, the moral dilemmas and the sacrifices involved.

During my university days, a film that left a deep impression was Francis Ford Coppola’s opus, Apocalypse Now. The film, adapted from Joseph Conrad’s seminal novella Heart of Darkness, tells the story of Colonel Kurtz, a decorated army vet who goes mad during the Vietnam war and becomes a tyrant running his own private fiefdom deep inside the jungle. As such he has become a clear and present danger to his own side. Rookie officer Willard is dispatched to take care of the situation. Initially resistant to the idea of eliminating one of his own, and full of the idealism and moral ambiguity that plague the young, Willard seeks advice from his commanding officer who tells him in no uncertain terms that he must put aside his emotions and do as duty demands.

“Terminate with extreme prejudice” are the last words the commanding officer says to Willard before leaving the room.

Vikram Zutshi @vikramzutshi is a journalist, filmmaker and cultural critic. He runs The Big Turtle Podcast and edits Sutra Journal. Views are personal.