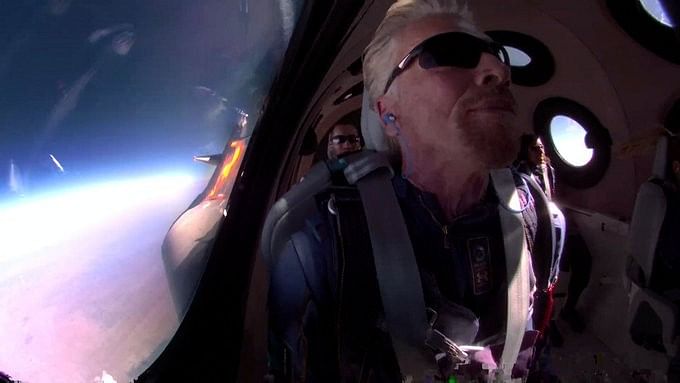 
On 11 July, founder of the Virgin Group, Richard Branson completed a trip to the boundary of outer space on his Virgin Galactic’s VSS Unity, dawning a new era of making space “more accessible to all”. Meanwhile, Amazon founder Jeff Bezos is also scheduled to lift off on his suborbital space vehicle ‘New Shepard’ on 20 July.

The privatisation of space travel is hardly a new phenomenon and neither is the desire to look beyond this planet to new avenues, be it over a genuine curiosity about the universe or over ambitions of colonisation. We aren’t that far removed from Donald Trump’s Space Force dreams either.

The face of astronomy in popular culture, Neil DeGrasse Tyson, perfectly stated the positive side of having a “cosmic perspective”.

“The day we cease the exploration of the cosmos is the day we threaten the continuance of our species,” Tyson said, as part of a spoken word performance released in 2016.

Sadly, such a well-intentioned, albeit idealistic, position is nowhere to be found in the high-budget, ill-advised vanity projects that make up the billionaires’ space race today. The space race now appears to be more about ego than scientific advancement as evidenced by how Branson ‘preponed’ his space flight to outdo Bezos.

From dream to reality, this is the story of @VirginGalactic. The next chapter begins tomorrow. Watch the #Unity22 launch live at 6 am PT | 9 am ET | 2 pm BST on https://t.co/PcvGTmA661 pic.twitter.com/ETa6KXRW5F

The Bezos vs Branson ‘coincidence’

In an interview with The Washington Post, Branson attempted to quell any notions of a rivalry with Bezos, stating that it was a mere “coincidence” that he and Bezos will be embarking on space travel in the same month.

But it is too little, too late. The hype trailers are out on social media and the narratives around ‘Bezos vs Branson’ have long since been manufactured. SpaceX owner Elon Musk also weighed in, wishing Branson luck ahead of the launch, as did Bezos.

2 days until #Unity22! Watch the launch live this Sunday at 6am PT | 9am ET | 2pm BST with @StephenAtHome @thegreatkhalid @Cmdr_Hadfield @KellieGerardi @virgingalactic pic.twitter.com/tpjIqeVE0L

Jeff Bezos with some kind words for Richard Branson on the eve of his historic flight.https://t.co/WNJ3xb6oG9 pic.twitter.com/3i6YW8VER1

Not everyone among the public appears to be particularly invested or impressed in seeing how their trips play out. To be honest, much on social media was about the Wimbledon or the Euros rather than Branson bicycling to his launchpad. But we did see criticism and memes directed at these billionaires.

wait jeff bezos and richard branson aren’t being *launched* into space? they’re just going to be in a plane that goes very high? that’s lame as hell i’m sorry

I hope Richard Branson stays in space. And he can take that other billionaire clown Bezos with him. What a shitty example of how privileged fuckers conduct themselves.

Richard Branson is proof that when billionaires realize saving the planet is like hard or whatever, their next best idea is to leave the planet behind entirely. As long as it’s still about them. A story in three parts. pic.twitter.com/Cf4qql02V9

Political commentator Francesca Florentini’s post is particularly strong, citing Branson’s history of false promises over the past two decades on the issue of climate change. This apathy towards the planet’s crumbling environment is far from the only issue surrounding this billionaires’ space race though.

The New Republic’s Jacob Silverman writes: “The best argument against the billionaire space race is how little impact it will have on the lives of most of Earth’s inhabitants. It will inaugurate a new era of ultra-expensive stunt tourism, perhaps, but it will do nothing for the common good.”

Science writer Shannon Stirone also commented in The Atlantic, “Leaving Earth right now isn’t just bad optics; it’s almost a scene out of a twisted B-list thriller: The world is drowning and scorching, and two of the wealthiest men decide to … race in their private rocket ships to see who can get to space a few days before the other. If this were a movie, these men would be Gordon Gekko and Hal 9000—both venerated and hated.”

Also Read: If Elon Musk wrote this, the headline would be a meme & Dogecoin fortunes would’ve changed

Harsh realities of what goes into making a space trip

What the social media marketing posts from Branson and Bezos conveniently omit the most is the challenges that make up the preparation of any expedition beyond Earth’s atmosphere.

In Branson’s case, the teething problems and previously fatal test flight faced by the VSS Unity spacecraft have been well-documented over Virgin Galactic’s 17-year history. As a result, Branson’s effort to gain a first-mover advantage in the race by moving the scheduled date feels hasty and doesn’t inspire confidence that everything will run smoothly.

Jeff Bezos has also encountered several issues, including not getting insurance, petitions to stop him from returning to Earth, among others.

But even if you put aside specific issues with the spacecraft, there’s a myriad of variables affecting the cosmic aspirations of all the billionaires in this race.

If any of you are under the impression that our billionaires might succeed in “escaping” to space, while the world burns, let me put those fears to rest with what I know from being the spouse of a NASA flight controller. 🧵

As detailed perfectly by journalist Sim Kern, the realities of space travel are a far cry from the glamorous, Hollywood-inspired “champagne-sipping” vacations that Branson or Bezos would have you believe.

The entire itinerary is intensely micromanaged amid equipment that needs to be constantly monitored for maintenance. Be it exercise, food, sleep or going to the bathroom, every aspect of time spent in the spacecraft is akin to being in a zero-gravity cage with no means of escape.

Despite this glamourised propaganda that has surrounded this space race, it will be truly amazing to see the level of spin that Branson or Bezos will use about their experiences. Branson has already announced a sweepstakes contest where the winners will get two tickets to go to space with all the proceeds going to a ‘space tourism charity’ called “Space for Humanity.” Branson claimed that his experience was the first step towards making space accessible to those who cannot afford it.

“If you ever had a dream, now is the time to make it come true. I’d like to end by saying welcome to the dawn of a new space age,” he said.

Bring on the vanity project, the memes are already in drafts.

I did not wake up this morning thinking someone would need to take this meme and modify it for Richard Branson, but here we are. pic.twitter.com/jcVFSEX1d8

Richard Branson, Jeff Bezos and Elon Musk to the rest of us pic.twitter.com/W7u6wyttkb