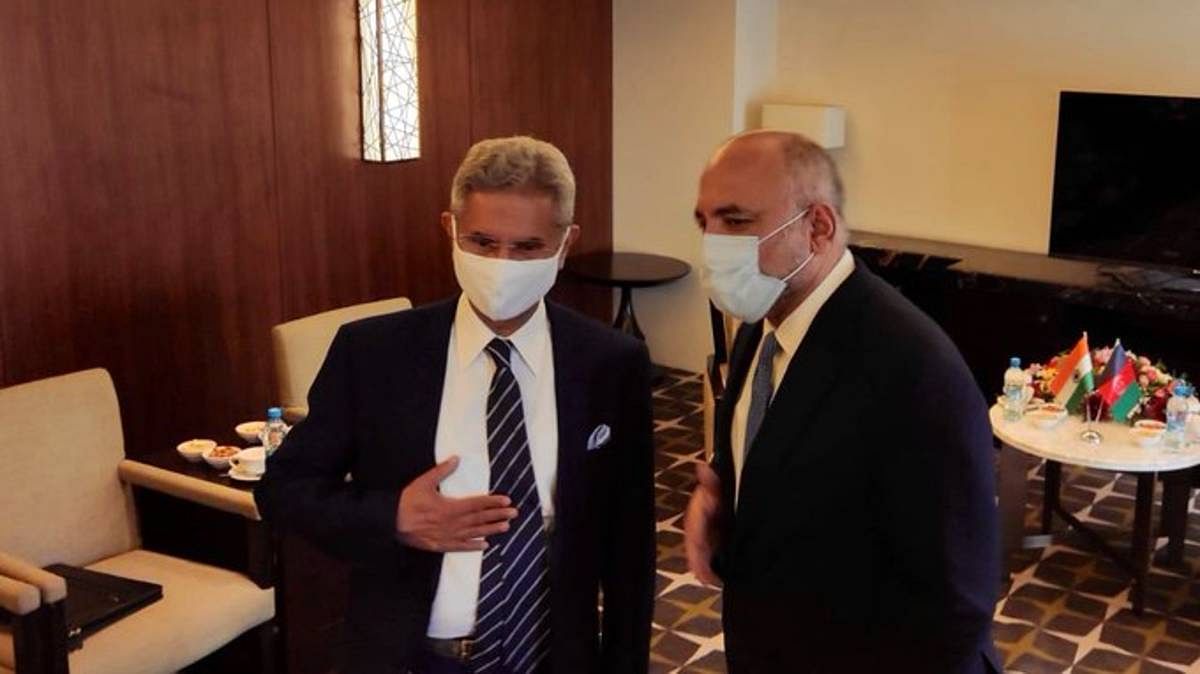 The meeting came on the sidelines of the Shanghai Cooperation Organization (SCO) Council of Foreign Ministers conference and the SCO Contact Group on Afghanistan.

Jaishankar is on a back-to-back trip to Tajikistan and Uzbekistan, which began Tuesday, to attend the SCO Foreign Minister’s meeting as well as the SCO Contact Group on Afghanistan.

After this, he will be traveling to Tashkent, Uzbekistan with the single biggest agenda of Afghanistan and the state of play there post the US’ withdrawal from the country by 31 August.

“Began my Dushanbe visit by meeting with Afghan FM @MHaneefAtmar. Appreciate his update on recent developments. Looking forward to the meeting of the SCO Contact Group on Afghanistan tomorrow,” Jaishankar said in a tweet.

Began my Dushanbe visit by meeting with Afghan FM @MHaneefAtmar. Appreciate his update on recent developments. Looking forward to the meeting of the SCO Contact Group on Afghanistan tomorrow. pic.twitter.com/O34PDkOFoh

This is their first meeting since India’s decision last week to evacuate its diplomatic staff from its mission in Kandahar owing to the rapid advancement of the Taliban fighters there.

According to sources, both sides also discussed the state of play in the Doha peace talks, which is going on between an Afghan government delegation and Taliban leaders at the Qatari capital.

India, sources said, is now also increasingly getting worried about the presence of its diplomats in Mazar-e-Sharif in Afghanistan, where it has a fully operational consulate.

An 11-member Afghan government delegation, which includes their key peace and reconciliation leaders Abdullah Abdullah and former President Hamid Karzai among others, are reportedly planning to visit Doha to meet the Taliban leaders there.

Also read: The Afghan chessboard is up for grabs again. And India is looking towards Iran this time

India’s channels of communication with the Taliban

Sources also told ThePrint that the Indian government has now “opened” channels of communication with the Taliban even as it aims to play a larger role as a stakeholder in the Afghan peace process.

According to a source, the Modi government believes that this is the time to speak to the Taliban, but a distinction has to be made between the moderates and the extremists.
Sources also added that Indian officials have been meeting the Taliban in Doha, not individually on a one-on-one basis but in groups.

Suhail Shaheen, spokesperson of the Taliban in Qatar, recently said in an interview that they expected India to remain impartial in the Taliban’s struggle to establish an Islamic Emirate in Afghanistan and that New Delhi should align with the Afghan people and not with a government which has been “imposed” on them.

This Monday, the US forces witnessed a transfer in command in Afghanistan. During the transition ceremony, the outgoing commander of U.S. Central Command Gen. Austin Miller, said, “It is important that the military sides set the conditions for a peaceful political settlement in Afghanistan.”

Marine Corps Gen. Kenneth F. McKenzie, who took over from Miller, said his primary responsibility will be to ensure the protection of American diplomats in the war-torn country, as well as supporting the Afghan government forces.

The Afghan National Defense and Security Forces (ANDSF) are now busy fighting the Taliban, who have escalated their fighting in Kandahar, Afghanistan’s second largest city in the south after Kabul and Ghazni City in south-eastern Afghanistan.

According to the Ministry of Defence of Afghanistan, the ANDSF have killed 267 Taliban terrorists, wounded 119 and arrested four in a series of operations in Nangarhar, Laghman, Kandahar, Herat, Balkh, Faryab, Jowzjan, Helmand, Badakhshan, Kunduz, Takhar, Kapisa and Kabul provinces since Monday, while diffusing 13 IEDs.

Uzbekistan’s capital Tashkent, where Jaishankar is next headed, will be hosting the international conference ‘Central and South Asia: Regional Interconnectedness. Challenges and Opportunities’.