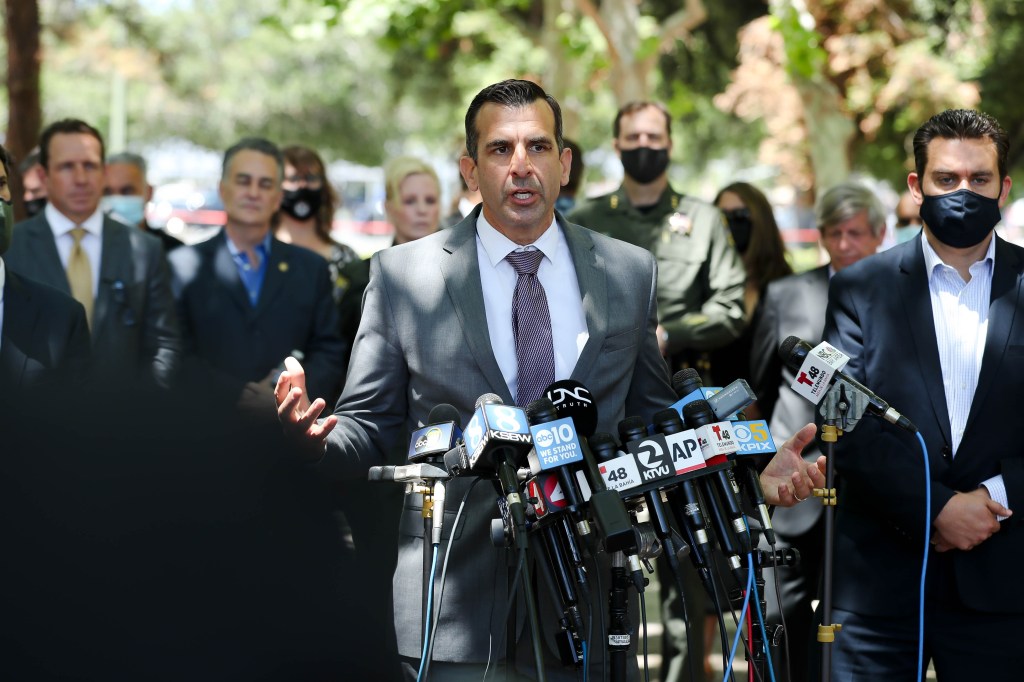 Less than two weeks after San Jose leaders made moves to enact a first-in-the-nation measure to make firearm owners pay for gun violence, Mayor Sam Liccardo traveled to the White House Monday to meet with President Joe Biden to discuss strategies to combat a surge in gun violence across the country.

Alarmed by the rise in such crimes, Biden touted his new federal crime prevention plan as he pushed back on progressive calls to defund the police and instead urged more funding for law enforcement.

“This president is genuinely interested in what is happening in local communities and what new ideas they’re trying,” Liccardo said in an interview after the meeting. “Because while there might be significant roadblocks to get new laws passed by Congress, there is a lot that can be done through executive order and reallocating resources to local communities.”

Monday’s meeting in Washington D.C. came about six weeks after the Bay Area’s deadliest mass shooting where nine employees at a VTA rail yard in San Jose were gunned down by their long-disgruntled colleague.

Although the FBI does not release full crime statistics until September, the National Commission on COVID-19 and Criminal Justice estimates that the U.S. homicide rate rose by 30% last year and gun assaults increased by 8% in big cities. Black and Brown Americans continue to be disproportionately harmed by gun violence. In Oakland, for instance, the city so far this year has seen a dramatic rise in gun crimes, including homicides, shootings, armed robberies and even mass shootings.

Biden last month laid out a plan for tackling gun violence that largely called for investing in, rather than defunding, the police — distancing himself from calls by some public safety reform advocates to spend more money on mental health and other social services instead of police departments, which is a stance Liccardo also has taken in San Jose.

As part of Biden’s strategy, he is encouraging jurisdictions across the country to draw on their designated $350 billion in coronavirus relief funds to support law enforcement such as hiring more police officers and crafting new crime prevention programs. The funds can also be used to pay for programs and jobs aimed to reach at-risk youths before they head down a path of crime and violence.

In San Jose, the city has allocated $20 million of its federal COVID relief funding to create a program called Resilience Corps whose goal is to employ hundreds of young adults in high-poverty and high-unemployment neighborhoods in jobs such as tutoring, food distribution, wildfire safety and disaster resilience.

“We know when we utilize trusted community members and encourage more community policing, we can intervene before the violence erupts,” Biden said during the meeting.

In mid-June, they passed a new law that requires gun retailers to video-record all firearm purchases, making San Jose the largest city in California and among the first major cities in the United States to do so. Then just two weeks later, the city council approved the mayor’s sweeping gun control plan, most notably forging ahead with plans to become the first U.S. city to mandate that gun owners carry liability insurance and pay the city a fee to spare taxpayers the financial toll of gun violence.

Liccardo said he used Monday’s meeting to provide the president and his senior advisors with more details about San Jose’s gun control reforms but also to hear about methods and programs that other cities are attempting.

“This is a reality that is afflicting every big city in the nation,” he said in an interview. “And it’s going to take a lot of collaboration. Certainly the federal government can help and cities can learn from one another about the best ideas that are having the most impact.”

Asked about the mayor’s visit with the president, gun rights groups again voiced their disgust for the San Jose’s new gun control measures and repeated threats of litigation.

“It is fantasy that the mayor believes that this is going to happen and that it is going to have any impact whatsoever on crime, gun violence or mass shootings,” said Sam Paredes, executive director of Gun Owners of California.

Paredes added that he was “spending an exorbitant amount of time” with fellow second amendment advocates to determine “who is going to file the first lawsuit and in what court.”

Even so, some San Jose residents are celebrating Liccardo’s leadership on this volatile issue.

Rachel Michelson, leader of the nonprofit Moms Demand Action San Jose, said Monday that she was “very encouraged” by the steps San Jose was taking to tackle illegal gun use in the city and that she was glad to see the recent VTA shooting sparked action from city leaders like Liccardo rather than “the typical thoughts and prayers.”

“We want our politicians to listen and take feedback from those on the streets and then to make policy around that,” she said. “One law or ordinance will not end our gun violence but we can attack it from all of these different angles.

“And I think we’re on the right path.”