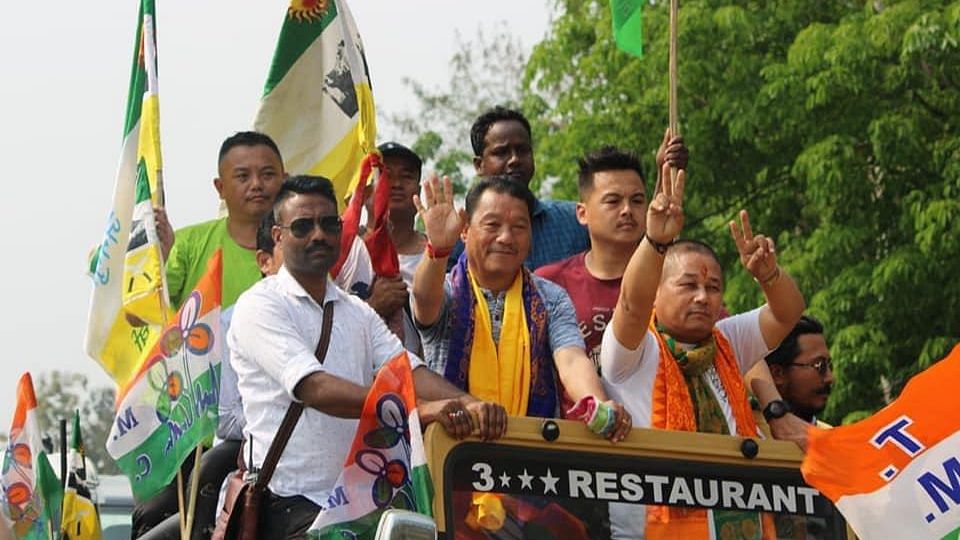 
Kolkata: The founder-president of the Gorkha Janmukti Morcha (GJM), Bimal Gurung, has accused the Modi government of “using and dumping” regional allies and said he was now negotiating with the West Bengal government for a permanent political solution to the Gorkhaland issue.

As part of the permanent solution, Gurung and his party want greater autonomy for the Gorkhaland Territorial Administration, the autonomous district council that partly governs the Darjeeling and Kalimpong areas.

“Over the past seven years, I’ve seen the abrogation of Article 370 in Kashmir, triple talaq, NRC, and CAA but nothing for Gorkhaland. That is how they (Modi government) used Gorkhas for one of the most important and internationally strategic Lok Sabha seats for the past 12 years,” Gurung said.

“They cannot afford to lose Darjeeling because of its proximity to Nepal and China. So, they used our emotive issue of Gorkhaland and gave nothing in return.”

Gurung has been the face of the Gorkhaland agitation since 2008 when he ousted Gorkha National Liberation Front (GNLF) chief Subhash Ghising from the Darjeeling hills. He had been a part of the BJP-led National Democratic Alliance (NDA) since 2009 before he broke away in October 2020. He allied with the Trinamool Congress (TMC) ahead of the 2021 assembly elections in West Bengal.

In this interview, Gurung spoke of his expectations from the Mamata government, his election losses, the GJM factions, and his opponents labelling him as a spent force.

‘Looking to Mamata for a permanent solution’

Gurung told ThePrint that a GJM delegation, led by the party’s general secretary Roshan Giri, was in Kolkata last week to discuss the Gorkhaland issue.

According to him, the team met senior ministers and the Trinamool general secretary Abhishek Banerjee, who is the CM’s nephew, over the promised permanent political solution (PPS), a term that was coined by the BJP.

The BJP, in its election manifesto for the 2019 Lok Sabha and 2021 assembly polls, had promised a permanent political solution for the Gorkhas.

“Before the 2021 elections, Mamata Banerjee too promised PPS to us. We need to accelerate the process now,” Gurung said. “That is why I sent a team to Kolkata. I will meet Didi soon to discuss this issue.”

While Gurung wants greater autonomy, neither the BJP nor the Trinamool has ever spelt out what they meant by a permanent solution.

“Mamata Banerjee promised a political solution before the election, and we want greater autonomy for Gorkha regions. We are gathering data for the region, the statistics related to the Gorkha population living in the hills, Terai, and the Dooars regions,” Gurung said.

“We are documenting this data. We will prepare a draft and submit it to the government soon. I have not returned after three years to sit idle or relax. I will fight for the Gorkha rights again, but I will do it peacefully now.

“Gorkhas did not achieve anything through mindless violence. I do not want jhamela with the state anymore. I will work with Mamata Banerjee and get a solution,” he added.

The Trinamool Congress brass told ThePrint that only Mamata can take a call on the political solution as it is “sensitive and not defined”.

Subrata Mukherjee, Mamata’s senior-most colleague in the cabinet and state’s panchayat and rural affairs minister, said, “Gurung’s team led by Roshan Giri met me. They sought elections in the GTA area and the adjacent panchayats in the region. I have asked them to prepare a document with details and submit it,” he said. “I will put it forward to the chief minister. She is in charge of the hill and home affairs. She will take a call.”

Another senior leader, close to Trinamool general secretary Abhishek Banerjee, said, “PPS for Gorkhas is a sensitive issue. There is no specific definition. So, Abhishek also told them that he would take this to the next level, that is Mamata Banerjee. None can speak on this except her.”

For all his overtures and initiatives, Gurung in recent years has had to contend with a breakaway faction, legal troubles,  a growing belief that he is no longer the face of the Gorkhaland movement, and most recently, an election wipeout in the hills.

Gone are his fiery speeches or the crowds he once garnered in Darjeeling’s Mall and Chowrasta areas. Also gone are the hundreds of young Gorkha men who used to surround him — Gurung now leads a solitary life with a small team of “personal bodyguards”.

He stayed away from the Darjeeling hills for three years, following the violent agitation in 2017 that killed over a dozen Gorkha youth after he was slapped with a number of cases.

There were as many as 156 cases against him, including charges of murder and sedition. Over 100 cases have been dropped by the state government and around a dozen cases are still on, he said.

“The case with the CBI (Madan Tamang murder case) is still on and will continue. I have a few more cases against me,” Gurung said. “The law will take its own course as politicians keep getting cases slapped against them. I am more interested in getting the names of my young brothers and sisters cleared from the political cases.”

Gurung holds the Modi government responsible for the violence in 2017. “The central government sent central forces that assaulted our people so much,” he added.

That incident also cost him politically as his most trusted lieutenant Binoy Tamang broke away to form the Tamang faction of the GJM.

The Tamang faction even outperformed Gurung’s GJM in the 2021 Bengal assembly elections.

Of the three hill assembly constituencies, the BJP-led coalition won Darjeeling and Kurseong while the Tamang faction took Kalimpong.

Gurung’s GJM had, in fact, finished third in all three constituencies, garnering 20.7 per cent of the vote share, while the BJP secured 39.4 per cent and the Tamang faction ended up with 32.8 per cent.

Gurung’s rivals point to his party’s election showing to insist that he is now a “spent force”.

“Bimal Gurung was a mass leader, who enjoyed immense public support as long as he fought for the collective aspirations of the people,” said Raju Bista, the BJP MP of Darjeeling. “But he changed tack and joined hands with the very party and individual who suspended all Constitutional rights of the people of the Darjeeling hills, Terai and Dooars. She arrested thousands on fabricated charges and unleashed tyranny and police raj on them. So it was but natural for the people to withdraw their support for him.

“I am sure Chief Minister Mamataji may have realised by now that bully tactics won’t work on the people from our region,” he added.

Binoy Tamang echoed Bista’s views. “Bimal Gurung is compromised and a spent force. Gorkhas don’t trust him anymore,” Tamang said. “He brought so much violence into our lives and then sold the Gorkha cause for his vested interests. He lost elections too. He is a nobody now.”

Reacting to the “spent force” jibe, Gurung said he was rebuilding his organisation.

“If Bimal Gurung can get around 20 per cent vote-share in the region without any organisation, can they imagine what he can do with an organisation?” he asked.

“The 2021 elections have been a lesson for us. I am with the state government, and I will see which government does what for the Gorkhas. Accordingly, I will plan my next move. For the time being, I am roaming around and rebuilding my organisation.”