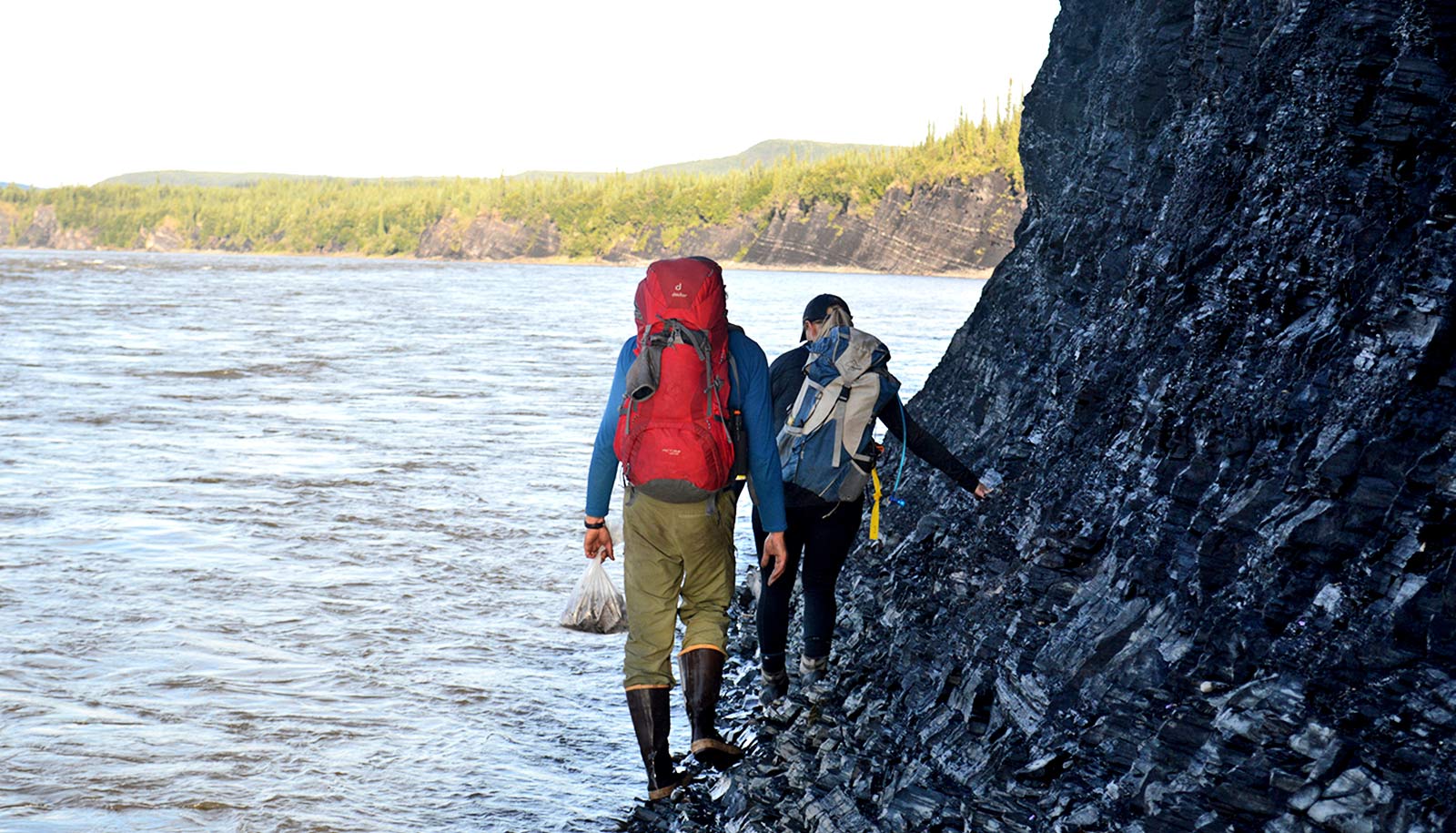 Expeditions to a remote area of Yukon, Canada, have uncovered a 120-million-year-long geological record of a time when land plants and complex animals first evolved and ocean oxygen levels began to approach those in the modern world.

Hundreds of millions of years ago, in the middle of what would eventually become Canada’s Yukon Territory, an ocean swirled with armored trilobites, clam-like brachiopods and soft, squishy creatures akin to slugs and squid.

Along the banks of the Peel River a few hundred miles south of the Arctic’s Beaufort Sea, scientists have unearthed a trove of fossils and rock layers formed on that ancient ocean floor.

The team hacked through brush with machetes beside Class VI rapids to collect hundreds of fist-sized samples of rock.

The discovery reveals oxygen changes at the seafloor across nearly 120 million years of the early Paleozoic era, a time that fostered the most rapid development and diversification of complex, multi-cellular life in Earth’s history.

“It’s unheard of to have that much of Earth’s history in one place,” says Stanford University geological scientist Erik Sperling, lead author of a paper on the findings in Science Advances. Most rock formations from the Paleozoic Era have been broken up by tectonic forces or eroded over time. “There’s nowhere else in the world that I know of where you can study that long a record of Earth history, where there’s basically no change in things like water depth or basin type.”

Oxygen was scarce in the deep water of this and other oceans at the dawn of the Paleozoic, roughly 541 million years ago. It stayed scarce until the Devonian, roughly 405 million years ago, when, in a geological blink—no more than a few million years—oxygen likely rocketed to levels close to those in modern oceans and the diversity of life on Earth exploded. Big, predatory fish appeared. Primitive ferns and conifers marched across continents previously ruled by bacteria and algae. Dragonflies took flight. And all of this after nearly four billion years of Earth’s landscapes being virtually barren.

Scientists have long debated what might have caused the dramatic shift from a low oxygen world to a more oxygenated one that could support a diverse web of animal life. But until now, it has been difficult to pin down the timing of global oxygenation or the long-term, background state of the world’s oceans and atmosphere during the era that witnessed both the so-called Cambrian explosion of life and the first of Earth’s “Big Five” mass extinctions, about 445 million years ago at the end of the Ordovician.

“In order to make comparisons throughout these huge swaths of our history and understand long-term trends, you need a continuous record,” says Sperling, an assistant professor of geological sciences at Stanford’s School of Earth, Energy, and Environmental Sciences.

The rough trip to Yukon fossils

With permission from the Na Cho Nyak Dun and Tetlit Gwitch’in communities in Yukon, Sperling’s team, which included researchers from Dartmouth College and the Yukon Geological Survey, spent three summers at the Peel River site. Arriving by helicopter, the research team hacked through brush with machetes beside Class VI rapids to collect hundreds of fist-sized samples of rock from more than a mile of interbedded layers of shale, chert, and lime mudstone.

Back at Sperling’s lab, a small army of summer undergraduates and graduate students worked over five summers to help analyze the fossils and chemicals entombed in the rocks. “We spent a lot of time splitting open rocks and looking at graptolite fossils,” Sperling says. Because graptolites evolved a vast array of recognizable body shapes relatively quickly, the pencil-like markings left by the fossils of these colony-dwelling sea creatures give geologists a way to date the rocks in which they’re found.

Once the researchers had finished identifying and dating graptolite fossils, they ground the rocks in a mill, then measured iron, carbon, phosphorous, and other elements in the resulting powder to assess the ocean conditions at the time and place where the layers formed. They analyzed 837 new samples from the Peel River site, as well as 106 new samples from other parts of Canada, and 178 samples from around the world for comparison.

The end of the graptolites

The data show low oxygen levels, or anoxia, likely persisted in the world’s oceans for millions of years longer than previously thought—well into the Phanerozoic, when land plants and early animals began to diversify. “The early animals were still living in a low oxygen world,” Sperling says. Contrary to long-held assumptions, the scientists found Paleozoic oceans were also surprisingly free of hydrogen sulfide, a respiratory toxin often found in the anoxic regions of modern oceans.

When oxygen eventually did tick upward in marine environments, it came about just as larger, more complex plant life took off. “There’s a ton of debate about how plants impacted the Earth system,” Sperling says. “Our results are consistent with a hypothesis that as plants evolved and covered the Earth, they increased nutrients to the ocean, driving oxygenation.” In this hypothesis, the influx of nutrients to the sea would have given a boost to primary productivity, a measure of how quickly plants and algae take carbon dioxide and sunlight, turn them into new biomass—and release oxygen in the process.

The change probably killed off graptolites. “Although more oxygen is really good for a lot of organisms, graptolites lost the low oxygen habitat that was their refuge,” Sperling says. “Any environmental change is going to have winners and losers. Graptolites might have been the losers.”

Support for this work came from an Ocean Sciences Research Fellowship from the Alfred P. Sloan Foundation, the affiliates of the Stanford Program on Deep-water Depositional Systems, the McGee-Levorsen fund at Stanford, the National Science Foundation, the Agouron Institute, and the Natural Sciences and Engineering Research Council (Canada).