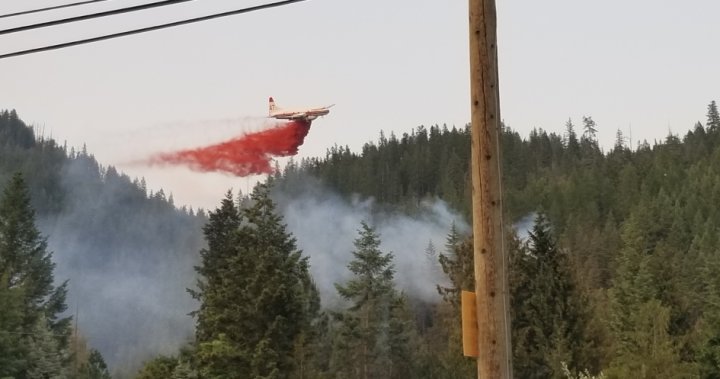 Officials heading B.C.’s wildfire battle said Thursday the season was so “unprecedented” they’re being forced to choose which fires to fight to protect both lives and property.
Kurtis Isfeld, manager of wildfire operations with the B.C. Wildfire Service, said the unusual weather pattern that moved across the province in late June brought a heat wave followed by a thunderstorm that caused more than 2,000 lightning strikes.

“These are typical of conditions usually seen in August so the season has been pushed forward by about a month,” Isfeld said.

“This appears to be the type of season that’s going to drag into the fall.”

He said usually at this time the service has responded to around 209 wildfires and about 60,000 hectares burned.

“About 35 per cent of total wildfires this season have been attributed to human activity,” Isfeld said of the current fire season, while almost half are believed to have been started by natural causes and the rest are still be determined.

Right now, there are 27 wildfires of note burning in the province across five of the six fire centres.

The focus for crews remains on the initial attack, Isfeld explained and said more than 2,500 personnel are involved in fighting fires across the province right now.

“What we’re finding this year that sets it apart from previous years is that neighbouring jurisdictions are also encountering the same type of challenging conditions,” Isfeld added.

“In addition, COVID has caused some complexities around resource exchange arrangements that we have with some of those agencies.”

“With the current resource challenges that we have, we are unable to commit to all new ignitions,” Isfeld said.

This means the focus is on allocating those resources to dealing with issues where there is immediate concerns to life and safety.

Read more:
B.C. wildfire map 2021: Location and size of the fires burning around the province

A state of emergency has not been declared in B.C. due to the wildfires burning.

Speaking at the same news conference, Brendan Ralfs, director of response for Emergency Management BC, said he wants to remind everyone that a state of emergency is “primarily a legislative tool.”

“During this current event, a provincial declaration of a state of emergency has not been necessary to provide assistance to people to access funding or to coordinate or obtain additional resources, including federal assets to support both response efforts and people who are affected or impacted by the event.”

Read more:
State of emergency for B.C.’s wildfires not ‘necessary’ at this time: officials

Rob Schweitzer, director of operations for the BC Wildfire Service said right now they remain focused on the key values of life property and people’s homes.

“We are confident right now that the fires that are top priority, the ones that are affecting communities, major transportation corridors, power lines, are ones that we have our resources on and we continue to focus on that,” he added.

“Right now, safety is the number one priority for the communities and that’s what we’re focused on.”