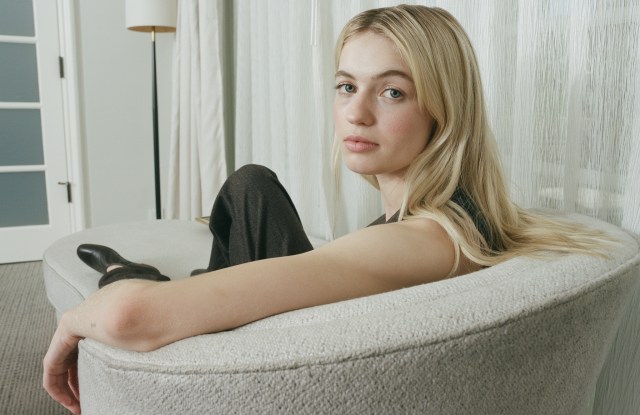 Olivia Scott Welch knew she had made it not when she’d been cast in a Netflix anthology film series nor when she was dressed in vintage Gucci for said films’ premiere. The pinch-me moment actually came when the “Fear Street” trailer yielded a trailer reaction video, which was flagged to her by her father.

Welch is the star of the “Fear Street” trilogy series on Netflix, the third and final installment of which drops on the streaming platform today. The series brings to life the cult classic R.L. Stein books, which have sold millions of copies since initial publication in 1989.

The Fort Worth, Texas native has always loved scary movies. She started watching Tim Burton films around the age of four, before her movie-buff parents began to introduce her to their favorites.

She first met “Fear Street” director Leigh Janiak on the Amazon show “Panic,” while Janiak was hard at work trying to get “Fear Street” off the ground. During the lag time, Janiak had decided to direct the “Panic” pilot, and she and Welch instantly bonded. One day at work, Welch was presented with the “Fear Street” pitch deck.

“She was like, ‘there’s three of them. They’re really crazy. And your friends will drown you in a lobster tank. And we’ll talk about them later,’” Welch recalls. “And I was, ‘well, you can’t just leave me! That’s insane!’”

The deck Janiak had made was constructed to resemble VHS tapes and was incredibly thematic.

“I just fell in love with it,” Welch says. “I knew right then that they would be so cool.”

Welch says part of the fun was getting to dive into classic horror trope characters, hers being the cheerleader figure.

“They all fit a trope like the John Hughes tropes, and those are really relevant in horror movies. And it was fun to play the cheerleader, and break her down and make her a real full person.”

Welch started out in a local after-school film program in her hometown, where she would head at 4 o’clock every day for acting classes focusing on film roles. Eventually she started working there, teaching younger students, while trying her hand at professional roles (she landed a part on a Nickelodeon show, among others). It was then that she booked a role on “Modern Family,” a favorite of hers.

“This was in the height of ‘Modern Family,’ and I was just a day player. I was in one scene, but when I was there one of the producers told me, ‘I picked you because I remembered you, I met you on the set of that Nickelodeon pilot and thought you were so good.’” It was her first glimpse into how an acting career builds, much like how her “Fear Street” leading role would later play out.

In addition to the acting, she is working with writing partners on getting their own spooky movie developed.

“I’ve always wanted to be at the start of making a movie,” she says. “I had known I wanted to do it, but then working on the ‘Fear’ shoot, our producers were a lot of ladies and they were all so young. And I was like, ‘oh, I think this is something that I could start doing right now.’ I don’t need to really wait any longer. And if I do, it’ll just be because I’m choosing to.”

More from the Eye:

Spike Lee on Louis Vuitton, Virgil Abloh and Paying Tribute to His Mother in Cannes