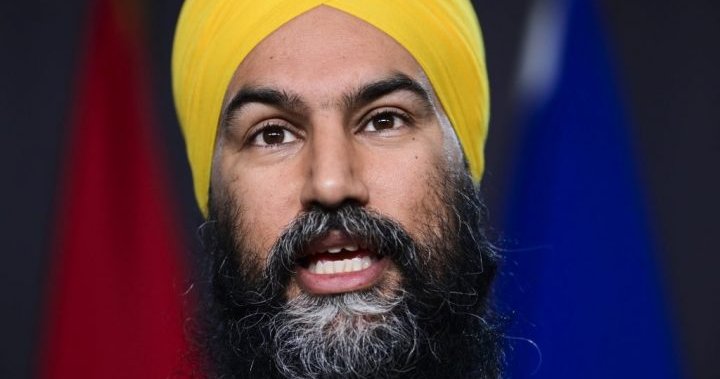 New Democrat Leader Jagmeet Singh is rejecting the idea of a one-time wealth tax that Parliament’s budget watchdog says could raise tens of billions of dollars, pushing instead for an ongoing tax on the “ultra rich.”

In a report Thursday, parliamentary budget officer Yves Giroux estimated that a one-time tax of three per cent and five per cent on Canadians with net wealth over $10 million and $20 million respectively would yield between $44 billion and $61 billion.

He qualified that his projection amounted to a “back-of-the-envelope calculation” informed by “avoidance/evasion behaviour with respect to the U.S. estate tax” and other factors.

However, Singh is sticking to his proposal from last year that calls for an annual tax of one per cent on families with fortunes over $20 million.

He said the budget officer’s report shows there’s plenty of revenue to be gleaned by government, but he believes a continuous tax on “ultra-wealthy” residents is the proper path to fair contributions.

Singh is also demanding a“pandemic profiteering tax” that would temporarily target web giants such as Google, Netflix and Amazon who are “taking that money offshore and not paying their fair share.”

“All this has happened because the Liberals and Conservatives have let them do this,” he said.

The Liberals disagreed with Singh’s characterization, pointing to a middle-class tax cut, higher personal income taxes for those earning over $150,000, and the Canada Child Benefit as among the measures “to make Canada fairer and more equitable for all.”

“We are committed to ensuring that everyone pays their fair share of tax so we continue to have the resources needed to invest in people and to help our economy recover the COVID-19 pandemic,” Katherine Cuplinskas, a spokeswoman for Finance Minister Chrystia Freeland, said in an email.

She also noted an extra $304 million in the April budget for the Canada Revenue Agency to combat tax evasion and avoidance as well as the requirement, effective at the beginning of this month, for foreign digital platforms such as Netflix and Spotify to collect and remit taxes in Canada.

2:13
Federal parties fine-tune their ballot question as signs point to an election

“Contrary to NDP talking points, Canada’s Conservatives actually created programs to stop international tax evasion. We believe the same rules apply to everyone. This is unlike the Liberals, who routinely apply one set of rules for everyday Canadians and a different set for well-connected Liberals and insiders,” he said in a statement.

As the country marches toward a likely election this year, the NDP is proposing to use the wealth-tax windfalls to pay for pricey pledges such as national pharmacare and long-term care home funding.

Singh’s stance against a one-shot wealth tax comes as he travels the country in a campaign-style tour to promote an NDP jobs plan and other platform planks.

He unveiled Wednesday the party’s plan to create one million jobs _ a goal the Liberals and Conservatives have also pledged to reach. It includes a promise that infrastructure projects funded would use Canadian steel and other domestic goods to fuel employment.

Read more:
If a federal election were called, would Conservative premiers take on Ottawa again?

The NDP’s jobs blueprint focuses heavily on past promises, including better supports for workers through a national dental care program, 10 days of paid sick leave and higher minimum wages.

Compared with a one-time wealth tax of up to five per cent, the NDP’s would-be annual tax would yield less money for Ottawa in the short term but potentially more in the long term, according to figures from the parliamentary budget officer.

Last July, Giroux estimated that a recurring net wealth tax of one per cent would pour $5.6 billion into federal coffers in 2020-21, courtesy of some 13,800 well-heeled families. That falls short of up to $12.1 billion in revenue in the first year of a one-time wealth tax, which would be collected in instalments over five years.

Data from the Canada Revenue Agency shows its recent efforts to combat tax evasion by the super-rich have resulted in zero prosecutions or convictions.

In response to a question tabled in Parliament by NDP MP Matthew Green, the CRA said it referred 44 cases on individuals whose net worth topped $50 million to its criminal investigations program since 2015.

Only two of those cases proceeded to federal prosecutors, with no charges laid afterward.