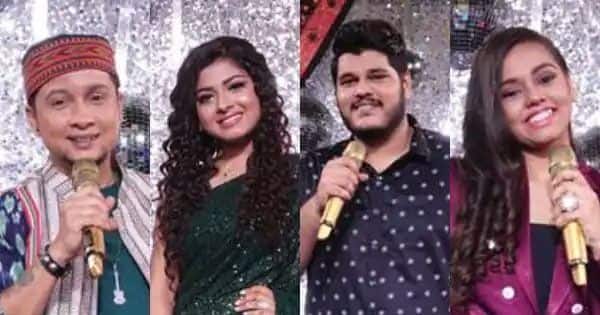 Indian Idol 12 has become the most loved reality show. The show will soon get the winner and fans are eagerly waiting to know the name. The TRPs of this season are also good but there were a lot of big celebrities who gave negative comments about the show. Indian Idol 12 has been a complete package of entertainment. The finale episode of the show will air of August 15 but there is another big update about the finale. Yes, as per reports in TellyChakkar, Indian Idol 12’s finale will be airing for a whopping 12 hours. The creative team of Indian Idol has left no stone unturned to keep the viewers glued to the show. The makers have done extensive planning to make the season’s finale a huge hit. We will see many celebrities on the finale and the past winners of the show will be gracing the finale. Also Read – Indian Idol 12: Pawandeep Rajan, Arunita Kanjilal, Shanmukhapriya and others look stylish in black as they shoot for something interesting – view pics

Reports also say that a lot of old memories will reminisce as the past winners will again enter the show. It will be interesting to see the 12 hour long finale episode. A lot of controversies have happened in this season. The makers have been called out for favouring some contestants, showing fake love angles and fake stories about the contestants’ financial conditions. Addressing the fake love angle between Pawandeep Rajan and Arunita Kanjilal, Mohammad Danish in an interview with BollywoodLife correspondent Ravi Pareek had said, “We all are like a family. We all share a great bond. There is nothing being done for TRP. I don’t think there is any love angle. They are great friends and share a great bond. But I don’t know if there is love.” Also Read – TRP Report week 27: Anupamaa BREAKS RECORDS; Indian Idol 12 and Taarak Mehta Ka Ooltah Chashmah maintain their spots

Danish had also reacted to his co-contestant Shanmukhapriya being trolled on social media because of her singing style. He said, “What she does, no one can do. What she does is not normal. All decisions are based on people’s votes. As a singer or listener and with all the knowledge that I have about music. Shanmukhapriya mein kuch toh khaas hai. So many legendary judges come on the show and they all appreciate her. So I don’t understand these controversies. I am sure she will keep entertaining people.” Also Read – Indian Idol 12: Mohd Danish reveals the truth behind Pawandeep Rajan and Arunita Kanjilal’s ‘love angle’ [Exclusive]