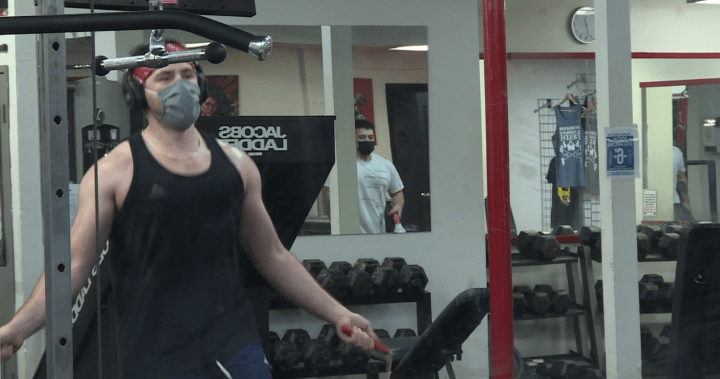 Ontario is opening its doors even further starting Friday, following the lead of many other provinces by allowing indoor dining and exercise classes, along with higher gathering limits.

But even though businesses are open, COVID-19 remains a threat across Canada.

So how can you determine how risky a location or event is, and whether you want to attend? Global News asked some experts to weigh in. Here’s what they said.

For Krishana Sankar, a molecular biologist and science adviser for the group Science Up First, the decision to go out and meet people begins with your own vaccination status.

“We know people with just … one dose of a vaccine [are] only partially protected from the Delta variant versus having both vaccines,” she said, noting protection increases to between 60 and 70 per cent and higher from about 33 per cent after a second shot.

“So it’s really important that people don’t become complacent and do get their second dose of the vaccine.”

“The other benefit we know is that it actually probably provides about 70 to 75 per cent reduction in you even getting the virus if you’re fully vaccinated. So that’s really good because that will then translate into a reduction in transmission.”

This means that if you’re vaccinated you’re also less likely to pass the virus on to others even if you do catch it, he said.

According to guidance from the Public Health Agency of Canada, if you’re fully vaccinated and you’re hanging out with a small group of other fully vaccinated people, you don’t generally need to wear a mask or keep your distance.

That calculation changes if other people aren’t vaccinated, or if you don’t know their status. This could be at the gym, at a restaurant, or at a party with people you don’t know. In those cases, PHAC says you should consider keeping a mask on and maintaining physical distancing even if you’re fully vaccinated. If you’re not, you should do this — no matter what.

“If you are in an enclosed space with others you trust and who you know are fully vaccinated, that should be fine,” Sankar said.

If there are a lot of people you don’t know, then you probably still want to take precautions, she said.


3. Risks to friends and family

You might also want to consider whether you have any particularly vulnerable people who you’re in contact with, Sankar said. This might be children who are too young to get vaccinated, or people with chronic health conditions that put them more at risk should they catch COVID-19.

“Personally, I’ve got a family with older members. If you have families with young kids or immunocompromised members in the family, you might want to really think about what the risks are for you when you gather,” she said.

If you are fully vaccinated and encountering other fully vaccinated people, the risk that you might carry the virus back to vulnerable family members is small, Evans said, adding that unfortunately, it’s not zero.

Evans said we aren’t at the point where we can say, “there’s a 100 per cent chance that you’re not going to go on and transmit it to your uncle, who has a condition where he’s immunocompromised because of his medical treatment.

“Indoors or outdoors” is the first thing you want to know about any given event, Evans said. “Anything that’s outdoors is much safer than anything indoors.”

If it is indoors, check out whether it’s in a confined space and how many people are present, he said.

“Places where … the space itself is small and enclosed and is crowded are always more risky than places where there’s a lot of room to move around and for people to kind of keep themselves distanced,” he said.

PHAC also notes that you should consider keeping windows open too.

Read more:
Ontario restaurants ‘scrambling’ to find new staff as some choose not to return

Masks are also important, Evans said, noting that if you and others are wearing masks the whole time, it’s much safer,.

He also cautions against venues that serve alcohol, as you and others are more likely to let your guard down after a few drinks and ignore masking and social distancing rules.

When case numbers are low in your community, it’s less likely that you’re going to encounter the virus, Evans said, although he said it’s better to look at a seven-day case average rather than the case count for a single day.

The percentage of tests coming back positive, and the estimated reproduction rate of the virus, are important measures to keep an eye on too, he said.

“If that reproductive number is getting to one, test positivity is rising above one per cent, closing on five per cent, that’s telling you that there’s a fair bit of viral prevalence in the area that you’re in and you need to be exercising due caution.”