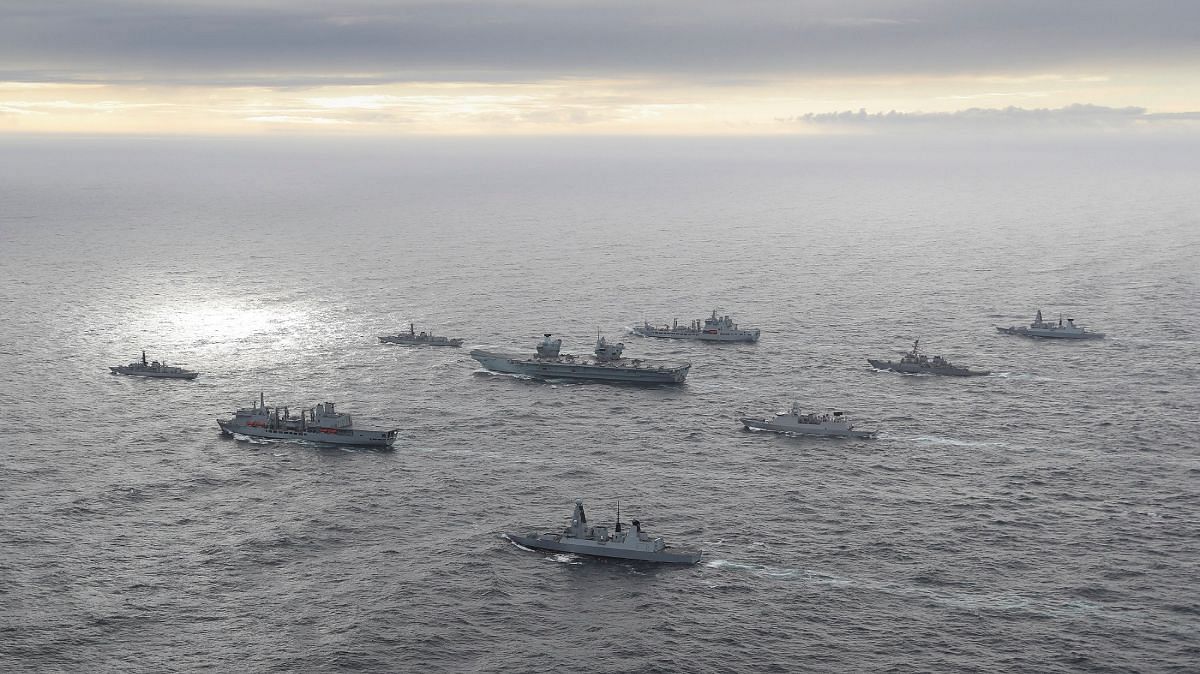 
New Delhi: The UK’s carrier strike group led by aircraft carrier HMS Queen Elizabeth has sailed into the Indian Ocean region and will carry out a wargame with the Indian Navy later this month in reflection of growing bilateral military ties.

India military officials said a series of complex drills will be carried out as part of the wargame that is expected to take place around July 26.

The high commission of the UK in India said the Carrier Strike Group (CSG) 2021, led by HMS Queen Elizabeth, has sailed into the Indian Ocean Region after transiting the Suez Canal.

“Following a series of successful engagements and operations in the Mediterranean it is now sailing east across the Indian Ocean towards India. It will then meet with ships from the Indian Navy to conduct routine maritime exercises,” the high commission said in a statement.

It said the deployment represents the UK’s commitment to deepening diplomatic, economic and security ties with India and in the Indo-Pacific region.

“It demonstrates both the UK’s support for the freedom of passage through vital trading routes and for a free, open and inclusive order in the Indo-Pacific,” it added.

British Defence Secretary Ben Wallace described the deployment of the CSG as a “major moment” for the UK’s defence.

“The group is sailing the Indian Ocean and will shortly conduct exercises with the Indian Navy, building on our already strong partnership with an important ally and friend,” he said.

“The deployment illustrates the UK’s enduring commitment to global defence and security, strengthening our existing alliances and forging new partnerships with like-minded countries as we face up to the challenges of the 21st century,” Wallace was quoted as saying in the statement.

Foreign Secretary Dominic Raab said the deployment of the CSG marks the start of a new era of defence cooperation with India and allies in the Indo-Pacific.

“By visiting 40 countries and working alongside our partners, the UK is standing up for democratic values, seizing new trading opportunities and tackling the shared threats we face together,” he said.

British High Commissioner to India, Alex Ellis, said: “The Carrier Strike Group is a powerful demonstration of our commitment to the security of India and the Indo-Pacific. Its arrival follows the UK’s first International Liaison Officer joining the Indian Navy’s Information Fusion Centre-Indian Ocean Region in Gurugram.”

“Today marks another step towards delivering the ambition set out jointly by our prime ministers in the 2030 Roadmap, bringing our countries, economies and people closer together,” he said. –PTI

Also read: Why India must get rid of separate disciplinary codes for Army, Navy & Air Force